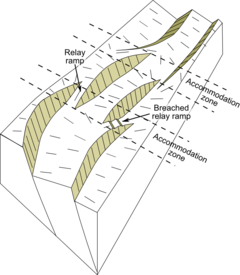 Block view of a rift formed of three segments, showing the location of the accommodation zones between them at changes in fault location or polarity (dip direction) 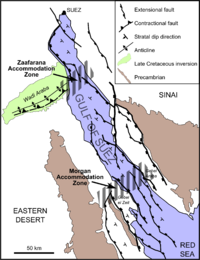 In geology, a rift is a linear zone where the Earth's crust and lithosphere are being pulled apart[1][2] and is an example of extensional tectonics.[3]

Typical rift features are a central linear downfaulted depression, called a graben, or more commonly a half-graben with normal faulting and rift-flank uplifts mainly on one side. Where rifts remain above sea level they form a rift valley, which may be filled by water forming a rift lake. The axis of the rift area may contain volcanic rocks, and active volcanism is a part of many, but not all active rift systems.

Major rifts occur along the central axis of most mid-ocean ridges, where new oceanic crust and lithosphere is created along a divergent boundary between two tectonic plates.

Failed rifts are the result of continental rifting that failed to continue to the point of break-up. Typically the transition from rifting to spreading develops at a triple junction where three converging rifts meet over a hotspot. Two of these evolve to the point of seafloor spreading, while the third ultimately fails, becoming an aulacogen.

Most rifts consist of a series of separate segments that together form the linear zone characteristic of rifts. The individual rift segments have a dominantly half-graben geometry, controlled by a single basin-bounding fault. Segment lengths vary between rifts, depending on the elastic thickness of the lithosphere. Areas of thick colder lithosphere, such as the Baikal Rift have segment lengths in excess of 80 km, while in areas of warmer thin lithosphere, segment lengths may be less than 30 km.[4] Along the axis of the rift the position, and in some cases the polarity (the dip direction), of the main rift bounding fault changes from segment to segment. Segment boundaries often have a more complex structure and generally cross the rift axis at a high angle. These segment boundary zones accommodate the differences in fault displacement between the segments and are therefore known as accommodation zones.

Accommodation zones take various forms, from a simple relay ramp at the overlap between two major faults of the same polarity, to zones of high structural complexity, particularly where the segments have opposite polarity. Accommodation zones may be located where older crustal structures intersect the rift axis. In the Gulf of Suez rift, the Zaafarana accommodation zone is located where a shear zone in the Arabian-Nubian Shield meets the rift.[5]

At the onset of rifting, the upper part of the lithosphere starts to extend on a series of initially unconnected normal faults, leading to the development of isolated basins.[6] In subaerial rifts, drainage at this stage is generally internal, with no element of through drainage.

As the rift evolves, some of the individual fault segments grow, eventually becoming linked together to form the larger bounding faults. Subsequent extension becomes concentrated on these faults. The longer faults and wider fault spacing leads to more continuous areas of fault-related subsidence along the rift axis. Significant uplift of the rift shoulders develops at this stage, strongly influencing drainage and sedimentation in the rift basins.[6]

During rifting, as the crust is thinned, the Earth's surface subsides and the Moho becomes correspondingly raised. At the same time, the mantle lithosphere becomes thinned, causing a rise of the top of the asthenosphere. Once rifting ceases, the mantle beneath the rift cools and this is accompanied by a broad area of post-rift subsidence. The amount of subsidence is directly related to the amount of thinning during the rifting phase calculated as the beta factor (initial crustal thickness divided by final crustal thickness), but is also affected by the degree to which the rift basin is filled at each stage, due to the greater density of sediments in contrast to water. The simple 'McKenzie model' of rifting, which considers the rifting stage to be instantaneous, provides a good first order estimate of the amount of crustal thinning from observations of the amount of post-rift subsidence.[7][8] This has generally been replaced by the 'flexural cantilever model', which takes into account the geometry of the rift faults and the flexural isostasy of the upper part of the crust.[9]

Some rifts show a complex and prolonged history of rifting, with several distinct phases. The North Sea rift shows evidence of several separate rift phases from the Permian through to the Earliest Cretaceous,[10] a period of over 100 million years.

Many rifts are the sites of at least minor magmatic activity, particularly in the early stages of rifting.[11] Alkali basalts and bimodal volcanism are common products of rift-related magmatism.[12][13]

The sedimentary rocks associated with continental rifts host important deposits of both minerals and hydrocarbons.[14]

SedEx mineral deposits are found mainly in continental rift settings. They form within post-rift sequences when hydrothermal fluids associated with magmatic activity are expelled at the seabed.[15]

Continental rifts are the sites of significant oil and gas accumulations, such as the Viking Graben and the Gulf of Suez Rift. Thirty percent of giant oil and gas fields are found within such a setting.[16] In 1999 it was estimated that there were 200 billion barrels of recoverable oil reserves hosted in rifts. Source rocks are often developed within the sediments filling the active rift (syn-rift), forming either in a lacustrine environment or in a restricted marine environment, although not all rifts contain such sequences. Reservoir rocks may be developed in pre-rift, syn-rift and post-rift sequences. Effective regional seals may be present within the post-rift sequence if mudstones or evaporites are deposited. Just over half of estimated oil reserves are found associated with rifts containing marine syn-rift and post-rift sequences, just under a quarter in rifts with a non-marine syn-rift and post-rift, and an eighth in non-marine syn-rift with a marine post-rift.[17]