From Infogalactic: the planetary knowledge core
Jump to: navigation, search
This article is about Greek writer and revolutionary. For other uses, see Rigas Feraios (disambiguation).

Rigas Feraios (Greek: Ρήγας Φεραίος, translit. pron, or Rhegas Pheraeos, pronounced [ˈriɣas fɛˈrɛɔs]) or Velestinlis (Βελεστινλής, or Velestinles, pronounced [vɛlɛstinˈlis])) ; 1757 – June 24, 1798) was a Greek writer, political thinker and revolutionary, active in the Modern Greek Enlightenment, remembered as a Greek national hero, a victim of the Balkan uprising against the Ottoman Empire and a pioneer of the Greek War of Independence.

Antonios Kyriazis (Αντώνιος Κυριαζής, pronounced [anˈdɔniɔs cirʝaˈzis]) was born in 1757 into a wealthy family in the village of Velestino in the Sanjak of Tirhala, Ottoman Empire (modern Thessaly, Greece). He was at some point nicknamed Pheraeos or Feraios, after the nearby ancient Greek city of Pherae, but he does not seem ever to have used this name himself; he is also sometimes known as Konstantinos or Constantine Rhigas (Κωνσταντίνος Ρήγας).[citation needed] He is often described as being of Aromanian ancestry,[1][2][3][4] with his native village of Velestino being Aromanian.[5][6][7] Rigas' family had its roots in Perivoli, another Aromanian village,[8] but it usually overwintered in Velestino.[9] Some scholars question whether there is good evidence for this.[10]

Rigas was educated at the school of Ampelakia, Larissa. Later he became a teacher in the village of Kissos, and he fought the local Ottoman presence. At the age of twenty he killed an important Ottoman figure, and fled to the uplands of Mount Olympus, where he enlisted in a band of soldiers led by Spiros Zeras. 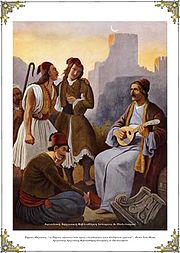 He later went to the monastic community of Mount Athos, where he was received by Cosmas, hegumen of the Vatopedi monastery; from there to Constantinople (Istanbul), where he became a secretary to the Phanariote Alexander Ypsilantis (1725-1805).

Arriving in Bucharest, the capital of Ottoman Wallachia, Rigas returned to school, learned several languages and eventually became a clerk for the Wallachian Prince Nicholas Mavrogenes. When the Russo-Turkish War (1787-1792) broke out, he was charged with the inspection of the troops in the city of Craiova.

Here he entered into friendly relations with an Ottoman officer named Osman Pazvantoğlu, afterwards the rebellious Pasha of Vidin, whose life he saved from the vengeance of Mavrogenes. [11] He learned about the French Revolution, and came to believe something similar could occur in the Balkans, resulting in self-determination for the Christian subjects of the Ottomans; he developed support for an uprising by meeting Greek bishops and guerrilla leaders.

After the death of his patron Rigas returned to Bucharest to serve for some time as dragoman at the French consulate. At this time he wrote his famous Greek version of La Marseillaise, the anthem of French revolutionaries, a version familiar through Lord Byron's paraphrase as "sons of the Greeks, arise".[11] 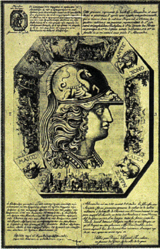 Portrait of Alexander the Great, published by Rigas in his Pamphlet

Around 1793 Rigas went to Vienna, the capital of the Holy Roman Empire and home to a large Greek community, as part of an effort to ask the French general Napoleon Bonaparte for assistance and support. While in the city, he edited a Greek-language newspaper, Ephemeris (i.e. Daily), and published a proposed political map of Great Greece which included Constantinople and many other places, including a large number of places where Greeks were in the minority (such as Constantinople).

He printed pamphlets based on the principles of the French Revolution, including Declaration of the Rights of Man and of the Citizen and New Political Constitution of the Inhabitants of Rumeli, Asia Minor, the Islands of the Aegean, and the principalities of Moldavia and Wallachia — these he intended to distribute in an effort to stimulate a Pan-Balkan uprising against the Ottomans.[11]

He also published Greek translations of three stories by Retif de la Bretonne, and many other foreign works, and he collected his poems in a manuscript (posthumously printed in Iaşi, 1814). 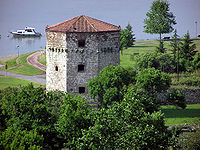 The tower where Rigas was executed. 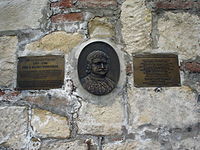 Memorial plate in front of Nebojša Tower (Belgrade) in which Rigas Feraios was strangled.

Flag proposed by Rigas for his envisioned pan-Balkan Federation. 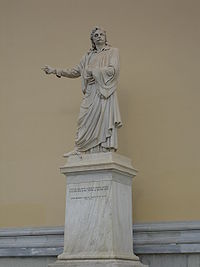 Statue of Rigas outside the University of Athens (by Ioannis Kossos).

He entered into communication with general Napoleon Bonaparte, to whom he sent a snuff-box made of the root of a Bay Laurel taken from a ruined temple of Apollo, and eventually he set out with a view to meeting the general of the Army of Italy in Venice. While traveling there, he was betrayed by Demetrios Oikonomos Kozanites, a Greek businessman, had his papers confiscated, and was arrested at Trieste by the Austrian authorities (an ally of the Ottoman Empire, Austria was concerned the French Revolution might provoke similar upheavals in its realm and later formed the Holy Alliance).

He was handed over with his accomplices to the Ottoman governor of Belgrade, where he was imprisoned and tortured. From Belgrade, he was to be sent to Constantinople to be sentenced by Sultan Selim III. While in transit, he and his five collaborators were strangled to prevent their being rescued by Rigas's friend Osman Pazvantoğlu. Their bodies were thrown into the Danube River.

His last words are reported as being: "I have sown a rich seed; the hour is coming when my country will reap its glorious fruits".

Rigas, using demotic rather than puristic Greek, aroused the patriotic fervor of his Greek contemporaries. His republicanism was given an aura of heroism by his martyrdom, and set liberation of Greece in a context of political reform. As social contraditions in Ottoman Empire grew sharper in the tumultuous Napoleonic era the most important theoretical monument of Greek republicanism, the anonymous Hellenic Nomarchy, was written, its author dedicating the work to Rigas Ferraios, who had been sacrificed for the salvation of Hellas.[12]

His grievances against the Ottoman occupation of Greece regarded its cruelty, the drafting of children between the ages of five and fifteen into military service (Devshirmeh or Paedomazoma), the administrative chaos and systematic oppression (including prohibitions on teaching Greek history or language, or even riding on horseback), the confiscation of churches and their conversion to mosques.

Rigas wrote enthusiastic poems and books about Greek history and many became popular. One of the most famous (which he often sang in public) was the Thourios or battle-hymn (1797), in which he wrote, "It's finer to live one hour as a free man than forty years as a slave and prisoner" («Ως πότε παλικάρια να ζούμε στα στενά…. Καλύτερα μίας ώρας ελεύθερη ζωή παρά σαράντα χρόνια σκλαβιά και φυλακή»).

In "Thourios" he urged the Greeks (Romioi) and other orthodox Christian peoples living at the time in the general area of Greece (Arvanites, Bulgarians, etc.[13][14]) to leave the Ottoman-occupied towns for the mountains, where they might experience more freedom.

It is noteworthy that the word "Greek" or "Hellene" is not mentioned in "Thourios"; instead, Greek-speaking populations in the area of Greece are still referred to as "Romioi" (i.e. Romans, citizens of the Christian or Eastern Roman Empire), which is the name that they proudly used for themselves at that time.[15]

Statues of Rigas Feraios stand at the entrance to the University of Athens and in Belgrade at the beginning of the street that bears his name (Ulica Rige od Fere).

Rigas Feraios was also the name taken by the youth wing of the Communist Party of Greece (Interior), and a branch of this youth wing was Rigas Feraios - Second Panhellenic. But there is nothing in Rigas's own writings that supports Communism, as his political vision was influenced by the French Constitution (i.e. democratic liberalism) [16][17][18] Rather, use of his name indicates the Communists' aspiration to link themselves with the heroic past of Greek Nationalism.

Nikos Xydakis and Manolis Rasoulis wrote a song called Etsi pou les, Riga Feraio (That's how it is, Rigas Feraios, Greek: Έτσι που λες, Ρήγα Φεραίο), which was sung by Rasoulis himself. Also, composer Christos Leontis wrote music based upon the lyrics of "Thourio" and Cretan Nikos Xylouris performed the song in the 1970s.