Righteous Among the Nations

From Infogalactic: the planetary knowledge core
(Redirected from Righteous Gentile)
Jump to: navigation, search
This article discusses the title in relation to the Shoah. See Virtuous pagan for the theological concept and Ger toshav ("Righteous gentile") for the concept in historical Judaism.

Righteous Among the Nations (Hebrew: חסידי אומות העולם‎, khassidey umot ha-olam "righteous (plural) of the world's nations") is an honorific used by the State of Israel to describe non-Jews who risked their lives during the Holocaust to save Jews from extermination by the Nazis.

The term originates with the concept of "righteous gentiles", a term used in rabbinical Judaism to refer to non-Jews, as ger toshav and ger tzedek, who abide by the Seven Laws of Noah. 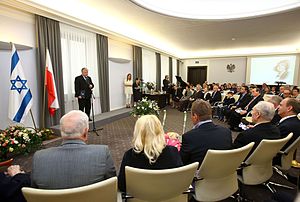 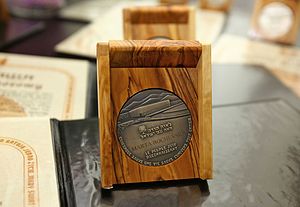 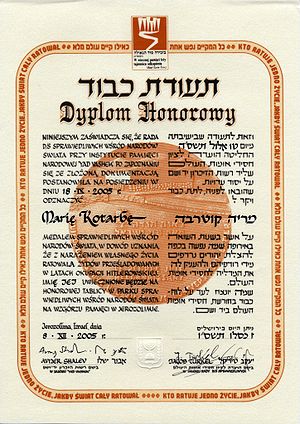 When Yad Vashem, the Shoah Martyrs' and Heroes' Remembrance Authority, was established in 1953 by the Knesset, one of its tasks was to commemorate the "Righteous among the Nations". The Righteous were defined as non-Jews who risked their lives to save Jews during the Holocaust (the term "Holocaust" may have come via Jewish-American journalist reporting on the Eichmann trial[1]). Since 1963, a commission headed by a justice of the Supreme Court of Israel is charged with the duty of awarding the honorary title "Righteous among the Nations". The commission is guided in its work by certain criteria and meticulously studies all documentation, including evidence by survivors and other eyewitnesses, evaluates the historical circumstances and the element of risk to the rescuer, and then decides if the case meets the criteria. Those criteria are:[2]

The award has been given without regard to the social rank of the helper. For example, it has been given to Queen Helen of Romania and Elisabeth of Bavaria, Queen of Belgium and to the most humble people without distinction.

A person who is recognized as "Righteous" for having taken risks to help Jews during the Holocaust is awarded a medal in his/her name, a certificate of honor, and the privilege of having the name added to those on the Wall of Honor in the Garden of the Righteous at Yad Vashem in Jerusalem (the last is in lieu of a tree planting, which was discontinued for lack of space). The awards are distributed to the rescuers or their next-of-kin during ceremonies in Israel, or in their countries of residence through the offices of Israel's diplomatic representatives. These ceremonies are attended by local government representatives and are given wide media coverage.

Recipients who choose to live in the state of Israel are entitled to a pension equal to the average national wage and free health care, as well as assistance with housing and nursing care. In total, 24,811 (as of 1 January 2013[update])[3] men and women from 45 countries have been recognized, amounting to more than 10,000 authenticated rescue stories. Yad Vashem's policy is to pursue the program for as long as petitions for this title are received and are supported by evidence that meets the criteria.[4]

Number of awards by country

The "Righteous" are honored with a feast day on the liturgical calendar of the Episcopal Church (USA) on 16 July. A "Righteous" from Italy, Edward Focherini, was beatified by the Catholic Church on 15 June 2013.[5]

In 2015, Lithuania's first street sign honoring a Righteous Among the Nations was unveiled in Vilnius.[6] The street is named Simaites Street, after Ona Šimaitė; she was a Vilnius University librarian who helped and rescued Jewish people in the Vilna Ghetto.[6]

At least 130 "Righteous Gentiles" have settled in Israel. They were welcomed by Israeli authorities, and were granted citizenship. In the mid-1980s, they became entitled to special pensions. Some of them settled in British Mandatory Palestine before Israel's re-establishment shortly after World War II, or in the early years of the new state of Israel, while others came later. Those who came earlier often spoke fluent Hebrew and have now integrated into Israeli society.[7]