Rights of way in England and Wales 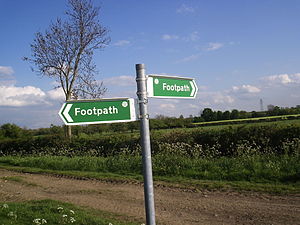 In England and Wales, other than in the 12 Inner London Boroughs and the City of London, public rights of way are paths on which the public have a legally protected right to pass and re-pass. The law in England and Wales differs from that in Scotland in that rights of way only exist where they are so designated (or are able to be designated if not already) whereas in Scotland any route that meets certain conditions is defined as a right of way, and in addition there is a general presumption of access to the countryside. Private rights of way or easements also exist.

To protect the existing rights of way in London the Ramblers launched their "Putting London on the Map" in 2010 with the aim go getting "the same legal protection for paths in the capital as already exists for footpaths elsewhere in England and Wales. Currently, legislation allows the Inner London boroughs to choose to produce definitive maps if they wish, but none do so".[2]

The launch event of "Putting London on the Map" took place at the British Library, and since then 'the Inner London Area of the Ramblers has been working with Ramblers Central Office staff to try to persuade each of the Inner London boroughs of the desirability of producing definitive maps of rights of way".[3]

In 2011 Lambeth Council passed a resolution to work towards creating a definitive map for their borough, but this does not yet exist.[4] The City of London has produced a Public Access Map.[5]

See also: Footpath and Long-distance footpaths in the UK 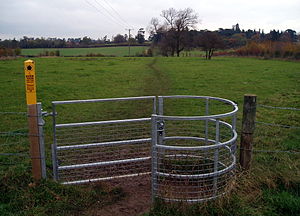 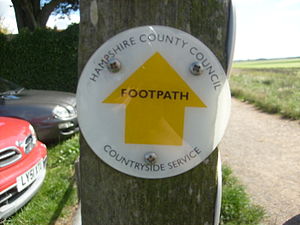 In England and Wales a public footpath is a path on which the public have a legally protected right to travel on foot and in some areas public footpaths form a dense network of short paths. It is probable that most footpaths in the countryside are hundreds of years old. The majority of footpaths are shown on Ordnance Survey 1:25,000 and 1:50,000 maps.

Local highways authorities (usually county councils or unitary authorities) are required to maintain the definitive map of all public rights of way in their areas and these can be inspected at council offices. If a path is shown on the definitive map and no subsequent legal order (such as a stopping up order) exists then the right of way is conclusive in law. Just because a path is not shown on that map does not mean that it is not a public path, as the rights may not have been recorded. The Countryside Agency estimated that over 10% of public paths were not yet listed on the definitive map. The Countryside and Rights of Way Act 2000 provides that paths that are not recorded on the definitive map by 2026 and that were in use prior to 1949 will automatically be deemed stopped up on 1 January 2026.

The highway right to use a right of way is restricted to passing and re-passing, associated activities, and the taking of 'usual accompaniments'. Bedford Borough Council mentions that walkers may: 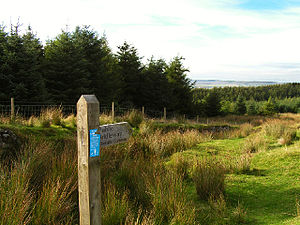 A public bridleway is a way over which the general public have the following, but normally (unless otherwise according to Wildlife & Countryside Act 1981 s56(1)(b)) no other rights:

Note that although Section 30 of the Countryside Act 1968 permits the riding of bicycles on public bridleways, the act says that it "shall not create any obligation to facilitate the use of the bridleway by cyclists". Thus, the right to cycle exists even though it may be difficult to exercise on occasion. Cyclists using a bridleway are obliged to give way to other users on foot or horseback.

Public bridleways are shown on Ordnance Survey 1:25,000 and 1:50,000 maps, but many public bridleways (as well as 'roads used as public paths', byways open to all traffic' and 'restricted byways') were recorded as footpaths only as a result of the burden of maintenance required by the National Parks and Access to the Countryside Act 1949 and so are now wrongly recorded on the definitive map.[7] Definitive Map Modification Orders are needed to correct these errors.

Byways open to all traffic 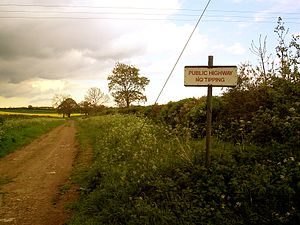 A byway open to all traffic, or BOAT, is a highway over which the public have a right to travel for vehicular and all other kinds of traffic but which is used by the public mainly for the purpose for which footpaths and bridleways are used. (Road Traffic Regulation Act 1984, section 15(9)(c), as amended by Road Traffic (Temporary Restrictions) Act 1991, Schedule 1).

Since the 2006 Regulations to the Countryside and Rights of Way Act 2000 BOATs should more properly be referred to as byways.

A road used as public path (RUPP) was one of the three types of public right of way (along with footpaths and bridleways) introduced by the National Parks and Access to the Countryside Act 1949. The Countryside Act 1968 required all highway authorities to reclassify RUPPs in their area – occasionally as public footpaths but in practice generally as public bridleways unless public vehicular rights were demonstrated to exist in which case it would become a 'byway open to all traffic'.[8]

This process was slow as it involved research into historic usage and often public enquiries, and so was not completed by the time the Countryside and Rights of Way Act 2000 was passed. This reclassified all remaining RUPPs as 'restricted byways' on 2 May 2006.

On 2 May 2006 the Natural Environment and Rural Communities Act 2006 reclassified all remaining Roads Used as Public Paths as restricted byways. The public's rights along a restricted byway are to travel: 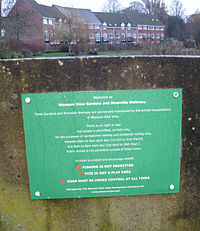 A permissive path, permitted path or concessionary path is not a public right of way, but a path (which could be for walkers, riders, cyclists, or any combination) whose use is allowed by the landowner, but over which there is no legal right of access. Some permissive footpaths and bridleways are shown on 1:25,000 and 1:50,00 scale Ordnance Survey maps.

A permissive path is often closed on a specified calendar day each year, and clearly signed as permissive. These are precautions to prevent any possible future claim of continuous public access, which could result in its becoming designated as a statutory right of way.[9]

Under the Countryside and Rights of Way Act 2000 the public also has a right to walk away from rights of way on designated "access land". This right is in addition to rights of way, and does not extend to horse-riders or cyclists. Access land may be closed for up to 28 days per year, whereas rights of way must remain open at all times, except in exceptional circumstances with special permission of the local authority.

A footpath, bridleway or restricted byway can be created by one of the following means.

In England and Wales, a footpath, bridleway or restricted byway may be expressly dedicated by the owner as a public right of way. Furthermore, unchallenged use by the public, as of right, for at least 20 years, may give rise to a presumption of dedication under Section 31 of the Highways Act 1980. A presumption of dedication may arise under common law after any appropriate period of time, by way of a presumed deed that has been lost; known as the doctrine of "modern lost grant". Paths created by express dedication since 1949 are not automatically maintainable at the public expense as a result of s.49 National Parks and Access to the Countryside Act 1949.[10]

Section 25 of the Highways Act 1980 allows a local authority (that is, a district or county council, or a unitary authority) to enter into an agreement (known as a 'public path creation agreement') with a relevant landowner to create a footpath or bridleway over land in their area. The local authority has to consult any other local authority in whose area the path will be, but does not have to consult wider. There is no provision for anyone else to be consulted or to object. The agreement must be advertised in the local paper, and the route is automatically maintainable at public expense.

Agreement between a parish council and landowner

Section 30 of the Highways Act 1980 allows a parish council (community council in Wales) to enter into an agreement with a relevant landowner to create a footpath, bridleway or restricted byway over land in their area or in an adjacent parish. The parish council is under no obligation to consult anyone. All they have to do is reach an agreement with the landowner. There is no provision for anyone else to be consulted or to object. The path is not automatically maintainable at the public expense.

Section 26 of the Highways Act 1980 allows a local authority (that is, a district or county council, or a unitary authority) to make an order to create a footpath or bridleway over land in their area. If there are no objections, the local authority can confirm the order themselves, so bringing the path into effect. However, where objections have been made, the order will need to be considered by an inspector from the Planning Inspectorate. Depending on the number and nature of the objections, he may consider the order after an exchange of written representations between the authority and the objectors, after holding a hearing, or after a public local inquiry. People who would like to use the path should submit letters saying why they need the path.

Section 228 of the Highways Act 1980 is mainly used by the street works authority (county council or unitary authority) to declare a street to be a highway maintainable at public expense. The street works authority has to perform works on the route. Such street works need only be appropriate to the type of highway to which the notice relates. So for a potential bridleway, if the grass is cut, or a hedge cut back, this could constitute street works for the purpose of this section, so enabling it to be used. The authority then places s.228 "Adoption of Streets" notices at each end of the route. Only the owner of a street (or if more than one, the majority of the owners) has the power to object. If there is an objection, the street works authority can either discontinue, or it can go to the magistrates' court. A path created by this method will be maintainable at the public expense. Hampshire County Council has used this method for footpaths,[11] and Essex County Council often uses it for new bridleways.[citation needed]