Riksdag of the Estates

Riksdag of the Estates (formally: Swedish: Riksens ständer; informally: Swedish: Ståndsriksdagen) was the name used for the Estates of Sweden when they were assembled. Until its dissolution in 1866, the institution was the highest authority in Sweden next to the king. It was a Diet made up of the Four Estates, which historically were the lines of division in Swedish society: 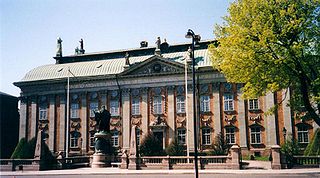 The House of Nobility, seat of the Nobility.

The meeting at Arboga in 1435 is usually considered to be the first Riksdag, but there is no indication that the fourth estate, the peasants, had been represented there[citation needed].

Replaced by the new Riksdag

File:SEK 5 1959.jpg
Representatives of the four estates on a commemorative coin (reverse).

In 1866 all the Estates voted in favor of dissolution and at the same time to constitute a new assembly, Sveriges Riksdag (the Riksdag). The four former estates were abolished. The House of Nobility, Swedish: Riddarhuset, remains as a quasi-official representation of the Swedish nobility. The modern Centre Party which grew out of the Swedish farmers' movement, could be construed as a modern representation with a traditional bond to the Estate of the Peasants.

Following the Finnish War in 1809, Sweden ceded its eastmost provinces to the Russian Empire. Compromising much of present-day Finland, these became a Grand Duchy under the Emperor, but the political institutions were kept practically intact. The Finnish estates assembled in 1809 at Porvoo to confirm the change in their allegiance. This Diet of Finland followed the forms of the Swedish Riksdag, being the legislative body of the new autonomous region. However, during the reigns of Alexander I and Nicholas I it was not assembled and no new legislation was enacted. The diet was next assembled by tsar Alexander II in 1863, due to the need to modernize the laws. After this the Diet met regularly until 1905, when it passed an act forming a new unicameral parliament. That assembly has been Finland's legislative body since then. The Finnish House of Nobility — Finnish: Ritarihuone; Swedish: Riddarhuset — carries on the tradition of the Estate of Nobility, but no new families have been ennobled since 1906.