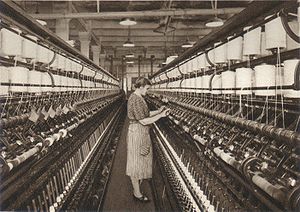 A ring spinning machine in the 1920s

Ring spinning is a method of spinning fibres, such as cotton, flax or wool, to make a yarn. The ring frame developed from the throstle frame, which in its turn was a descendant of Arkwright's water frame. Ring spinning is a continuous process, unlike mule spinning which uses an intermittent action. In ring spinning, the roving is first attenuated by using drawing rollers, then spun and wound around a rotating spindle which in its turn is contained within an independently rotating ring flyer. Traditionally ring frames could only be used for the coarser counts, but they could be attended by semi-skilled labour.[1] 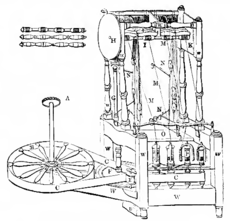 Developments in the United States

Machine shops experimented with ring frames and components in the 1830s. The success of the ring frame, however, was dependent on the market it served and it was not until industry leaders like Whitin Machine Works in the 1840s and the Lowell Machine Shop in the 1850s began to manufacture ring frames that the technology started to take hold.[4]

After the war, mill building started in the south, it was seen as a way of providing employment. Almost exclusively these mills used ring technology to produce coarse counts, and the New England mills moved into fine counts.

Jacob Sawyer vastly improved spindle for the ring frame in 1871, taking the speed from 5000rpm to 7500rpm and reducing the power needed, formerly 100 spindles would need 1 hp but now 125 could be driven. This also led to production of fine yarns.[6] During the next ten years, the Draper Corporation protected its patent through the courts. One infringee was Jenks, who was marketing a spindle known after its designer, Rabbeth. When they lost the case, Mssrs. Fales and Jenks, revealed a new patent free spindle also designed by Rabbeth, and also named the Rabbeth spindle.

The Rabbeth spindle was self-lubricating and capable of running without vibration at over 7500 rpm. The Draper Co. bought the patent and expanded the Sawyer Spindle Co. to manufacture it. They licensed it to Fales & Jenks Machine Co., the Hopedale Machine Co., and later, other machine builders. From 1883 to 1890 this was the standard spindle, and William Draper spent much of his time in court defending this patent.[6]

The new method was compared with the self-acting spinning mule which was developed by Richard Roberts using the more advanced engineering techniques in Manchester. The ring frame was reliable for coarser counts while Lancashire spun fine counts as well. The ring frame was heavier, requiring structural alteration in the mills and needed more power. These were not problems in the antebellum cotton industry in New England. It fulfilled New England's difficulty in finding skilled spinners: skilled spinners were plentiful in Lancashire. In the main the requirements on the two continents were different, and the ring frame was not the method of choice for Europe at that moment. 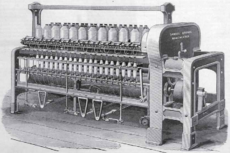 Mr Samuel Brooks of Brooks & Doxey Manchester was convinced of the viability of the method. After a fact-finding tour to the States by his agent Blakey, he started to work on improving the frame. It was still too primitive to compete with the highly developed mule frames, let alone supersede them. He first started on improving the doubling frame, constructing the necessary tooling needed to improve the precision of manufacture. This was profitable and machines offering 180,000 spindle were purchased by a sewing thread manufacturer.[7]

Brooks and other manufacturers now worked on improving the spinning frame. The principal cause for concern was the design of the Booth-Sawyer spindle. The bobbin did not fit tightly on the spindle and vibrated wildly at higher speeds. Howard & Bullough of Accrington used the Rabbath spindle, which solved these problems. Another problem was ballooning, where the thread built up in an uneven manner. This was addressed by Furniss and Young of Mellor Bottom Mill, Mellor by attaching an open ring to the traverse or ring rail. This device controlled the thread, and consequently a lighter traveller could be made which could operate at higher speeds. Another problem was the accumulation of fluff on the traveller breaking the thread - this was eliminated by a device called a traveller cleaner.[8]

A major time constraint was doffing, or changing the spindles. Three hundred or more spindles had to be removed, and replaced. The machine had to be stopped while the doffers, who were often very young boys, did this task. The frame was idle until it was completed. A mechanical doffer system reduced the doffing time to 30–35 seconds. [9]

The ring frame was extensively used in the United States, where coarser counts were manufactured. Many of frame manufacturers were US affiliates of the Lancashire firms, such as Howard & Bullough and Tweedales and Smalley. They were constantly trying to improve the speed and quality of their product. The US market was relatively small, the total number of spindles in the entire United States was barely more than the number of spindles in one Lancashire town, Oldham. When production in Lancashire peaked in 1926 Oldham had 17.669 million spindles and the UK had 58.206 million.[10]

Technologically mules were more versatile. The mules were more easily changed to spin the larger variety of qualities of cotton then found in Lancashire. While Lancashire concentrated on "Fines" for export, it also spun a wider range, including the very coarse wastes. The existence of the Liverpool cotton exchange meant that mill owners had access to a wider selection of staples.

The wage cost per spindle is higher for ring spinning. In the states, where cotton staple was cheap, the additional labour costs of running mules could be absorbed, but Lancashire had to pay shipment costs. The critical factor was the availability of labour, when skilled labour was scarce then the ring became advantageous.[11] This had always been so in New England, and when it became so in Lancashire, ring frames started to be adopted.

The first known mill in Lancashire dedicated to ring spinning was built in Milnrow for the New Ladyhouse Cotton Spinning Company (registered 26 April 1877). A cluster of smaller mills developed which between 1884 and 1914 out performed the ring mills of Oldham.[12] After 1926, the Lancashire industry went into sharp decline, the Indian export market was lost, Japan was self-sufficient. Textile firms united to reduce capacity rather than to add to it. It wasn't until the late 1940s that some replacement spindles started to be ordered and ring frames became dominant. Debate still continues in academic papers on whether the Lancashire entrepreneurs made the right purchases decisions in the 1890s.[11] The engine house and steam engine of the Ellenroad Ring Mill are preserved. 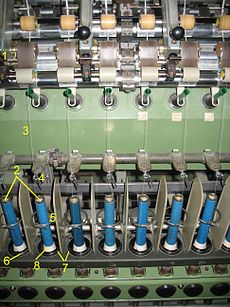 A ring frame was constructed from cast iron, and later pressed steel. On each side of the frame are the spindles, above them are draughting (drafting) rollers and on top is a creel loaded with bobbins of roving. The roving (unspun thread) passes downwards from the bobbins to the draughting rollers. Here the back roller steadied the incoming thread, while the front rollers rotated faster, pulling the roving out and making the fibres more parallel. The rollers are individually adjustable, originally by mean of levers and weights. The attenuated roving now passes through a thread guide that is adjusted to be centred above the spindle. Thread guides are on a thread rail which allows them to be hinged out of the way for doffing or piecing a broken thread. The attenuated roving passes down to the spindle assembly, where it is threaded though a small D ring called the traveller. The traveller moves along the ring. It is this that gives the ring frame its name. From here the thread is attached to the existing thread on the spindle.[14]

The traveller, and the spindle share the same axis but rotate at different speeds. The spindle is driven and the traveller drags behind thus distributing the rotation between winding up on the spindle and twist into the yarn. The bobbin is fixed on the spindle. In a ring frames, the different speed was achieved by drag caused by air resistance and friction (lubrication of the contact surface between the traveller and the ring was a necessity). Spindles could rotate at speeds up to 25,000 rpm,[citation needed] this spins the yarn. The up and down ring rail motion guides the thread onto the bobbin into the shape required: i.e. a cop. The lifting must be adjusted for different yarn counts.

Doffing is a separate process. An attendant (or robot in an automated system) winds down the ring rails to the bottom. The machine stops. The thread guides are hinged up. Removing the bobbin coils (yarn packages) on the spindles, and places a new bobbin tube on the spindle trapping the thread between it and the cup in the wharf of the spindle. This done, the thread guides are lowered and the machine restarted. On new machines, all the processes are done automatically, the yarn can then be transported to a cone winder.

Latest machines with new production/quality standard are from Rieter (Switzerland), ToyoTa (Japan). Zinser (Germany)and Marzoli (Italy). Rieter had a monopoly in their compact K45 system, a machine with 1632 spindles, ToyoTa has also announced a machine with 1824 spindles. Spinneries typically have many machines in huge halls in controlled atmospheric condition.In latest stages many Indian as well as Chinese manufacturers are also giving compact yarn systems.Out of all Suessen Elite Compact still stands the best.[15]