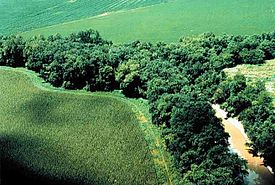 A well-preserved riparian strip on a tributary to Lake Erie

A riparian zone or riparian area is the interface between land and a river or stream. Riparian is also the proper nomenclature for one of the fifteen terrestrial biomes of the earth. Plant habitats and communities along the river margins and banks are called riparian vegetation, characterized by hydrophilic plants. Riparian zones are significant in ecology, environmental management, and civil engineering because of their role in soil conservation, their habitat biodiversity, and the influence they have on fauna and aquatic ecosystems, including grassland, woodland, wetland or even non-vegetative. In some regions the terms riparian woodland, riparian forest, riparian buffer zone, or riparian strip are used to characterize a riparian zone. The word "riparian" is derived from Latin ripa, meaning river bank.

Riparian zones may be natural or engineered for soil stabilization or restoration. These zones are important natural biofilters, protecting aquatic environments from excessive sedimentation, polluted surface runoff and erosion. They supply shelter and food for many aquatic animals and shade that is an important part of stream temperature regulation. When riparian zones are damaged by construction, agriculture or silviculture, biological restoration can take place, usually by human intervention in erosion control and revegetation. If the area adjacent to a watercourse has standing water or saturated soil for as long as a season, it is normally termed a wetland because of its hydric soil characteristics. Because of their prominent role in supporting a diversity of species, riparian zones are often the subject of national protection in a Biodiversity Action Plan. These are also known as a "Plant or Vegetation Waste Buffer".

Research shows riparian zones are instrumental in water quality improvement for both surface runoff and water flowing into streams through subsurface or groundwater flow. Particularly the attenuation of nitrate or denitrification of the nitrates from fertilizer in this buffer zone is important. Riparian zones can play a role in lowering nitrate contamination in surface runoff from agricultural fields, which runoff would otherwise damage ecosystems and human health. The use of wetland riparian zones shows a particularly high rate of removal of nitrate entering a stream and thus has a place in agricultural management.

From a social aspect, riparian zones contribute to nearby property values through amenity and views, and they improve enjoyment for footpaths and bikeways through supporting foreshoreway networks. Space is created for riparian sports including fishing, swimming and launching for vessels and paddlecraft.

The riparian zone acts as a sacrificial erosion buffer to absorb impacts of factors including climate change, increased runoff from urbanisation and increased boatwake without damaging structures located behind a setback zone.

The protection of riparian zones is often a consideration in logging operations. The undisturbed soil, soil cover, and vegetation provide shade, plant litter, woody material, and reduce the delivery of soil eroded from the harvested area. Factors such as soil types and root structures, climatic conditions and above ground vegetative cover impact the effectiveness of riparian buffering. 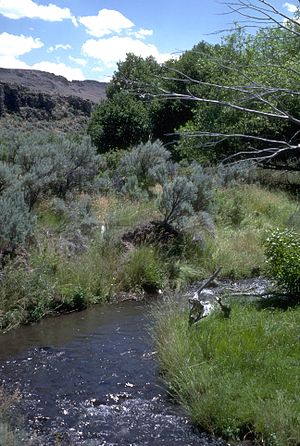 Riparian zone along Trout Creek in the Trout Creek Mountains; part of the Burns Bureau of Land Management District in southeastern Oregon. The creek provides critical habitat for trout.

The assortment of riparian zone trees varies from those of wetlands and typically consists of plants that either are emergent aquatic plants, or herbs, trees and shrubs that thrive in proximity to water.

In Asia there are different types of riparian vegetation, but the interactions between hydrology and ecology are similar as occurs in other geographic areas.[3]

Land clearing followed by floods can quickly erode a riverbank, taking valuable grasses and soils downstream, and allowing the sun to bake the land dry. Natural Sequence Farming techniques have been used in the Upper Hunter Valley of New South Wales, Australia in an attempt to rapidly restore eroded farms to optimum productivity.[citation needed].

The Natural Sequence Farming technique involves placing obstacles in the water's pathway to lessen the energy of a flood, and help the water to deposit soil and seep into the flood zone. Another technique is to quickly establish ecological succession by encouraging fast growing plants such as "weeds" (pioneer species) to grow. These may spread along the watercourse and cause environmental degradation but may stabilize the soil, place carbon into the ground, and protect the land from drying. The weeds will improve the streambeds so that trees and grasses can return, and later ideally replace the weeds. There are several other techniques used by government and non government agencies to address riparian and streambed degradation ranging from installation of bed control structures such as log sills to use of pin groynes or rock emplacement. All work in streambeds is controlled by state government regulation and should not be attempted without expert advice and oversight.