Rise of nationalism in Europe

Nationalism refers to the devotion for one's own nation's interests over those of all other nations. It was an important factor in the development of Europe. In the 19th century, a wave of romantic nationalism swept the European continent, transforming its countries. Some newly formed countries, such as Germany, Italy and Romania were formed by uniting various regional states with a common "national identity". Others, such as Greece, Poland and Bulgaria, were formed by uprisings against the Ottoman Empire and Russia. More concisely, nationalism better defined these countries.[1] 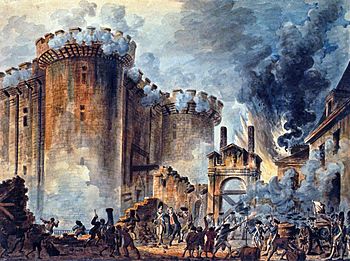 The French Revolution paved the way for the modern nation-state and also played a key role in the birth of nationalism. Across Europe radical intellectuals, influenced by Napoleon and the Napoleonic Code the instrument for the political transformation of Europe. Revolutionary armies carried the slogan of "liberty, equality and brotherhood" and ideas of liberalism and national self-determinism. National awakening also grew out of an intellectual reaction to the Enlightenment that emphasized national identity and developed a romantic view of cultural self-expression through nationhood. The key exponent of the modern idea of the nation-state was the German G. W. Friedrich Hegel. He argued that a sense of nationality was the cement that held modern societies together in the age when dynastic and religious allegiance was in decline. In 1815, at the end of the Napoleonic wars, the major powers of Europe tried to restore the old dynastic system as far as possible, ignoring the principle of nationality in favour of "legitimism", the assertion of traditional claims to royal authority. With most of Europe's peoples still loyal to their local province or city, nationalism was confined to small groups of intellectuals and political radicals. Furthermore, political repression, symbolized by the Carlsbad Decrees published in Austria in 1819, pushed nationalist agitation underground.

The struggle for independence 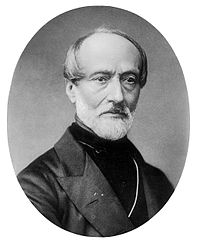 A strong resentment of what came to be regarded as foreign rule began to develop. In Ireland, Italy, Belgium, Greece, Poland, Hungary and Norway local hostility to alien dynastic authority started to take the form of nationalist agitation.[when?] The first revolt in the Ottoman Empire to acquire a national character was the Serbian Revolution (1804–17),[3] which was the culmination of the Serbian renaissance[4] which had begun in Habsburg territory, in Sremski Karlovci.[3] The eight-year Greek War of Independence (1821–29) against Ottoman rule led to an independent Greek state, although with major political influence of the great powers.[5] The Belgian Revolution (1830–31) led to the recognition of independence from the Netherlands in 1839.[6] Over the next two decades nationalism developed a more powerful voice, spurred by nationalist writers championing the cause of self-determination. The Poles attempted twice to overthrow Russian rule in 1831 and 1846. In 1848, revolutions broke out across Europe, sparked by severe famine and economic crisis and mounting popular demand for political change. In Italy Giuseppe Mazzini used the opportunity to encourage a war mission: "A people destined to achieve great things for the welfare of humanity must one day or other be constituted a nation". 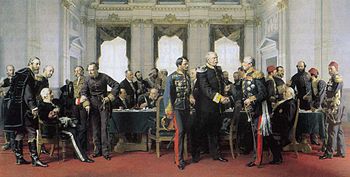 In Hungary, Lajos Kossuth led a national revolt against Austrian rule; in Transylvania, Avram Iancu led successful revolts in 1848. The 1848 crisis had given nationalism its first full public airing, and in the thirty years that followed no fewer than seven new national states were created in Europe. This was partly the result of the recognition by conservative forces that the old order could not continue in its existing form. Conservative reformers such as Cavour and Bismarck made common cause with liberal political modernizers to create a consensus for the creation of conservative nation-states in Italy and Germany. In the Habsburg Monarchy a compromise was reached with Hungarian nationalists in 1867 granting them virtual independence. Native history and culture were rediscovered and appropriated for the national struggle. Following a conflict between Russia and Turkey, the Great Powers met at Berlin in 1878 and granted independence to Romania, Serbia and Montenegro and a limited autonomy to Bulgaria. 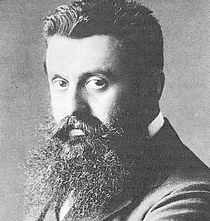 The invention of a symbolic national identity became the concern of racial, ethnic or linguistic groups throughout Europe as they struggled to come to terms with the rise of mass politics, the decline of the traditional social elites, popular discrimination and xenophobia. Within the Habsburg empire the different peoples developed a more mass-based, violent and exclusive form of nationalism. This developed even among the Germans and Magyars, who actually benefited from the power-structure of the empire. On the European periphery, especially in Ireland and Norway, campaigns for national independence became more strident. In 1905 Norway won independence from Sweden, but attempts to grant Ireland the kind of autonomy enjoyed by Hungary foundered on the national divisions on the island between the Catholic and Protestant populations. The Polish attempts to win independence from Russia had previously proved to be unsuccessful, with Poland being the only country in Europe whose autonomy was gradually limited rather than expanded throughout the 19th century, as a punishment for the failed uprisings; in 1831 Poland lost its status as a formally independent state and was merged into Russia as a real union country and in 1867 she became nothing more than just another Russian province. Faced with internal and external resistance to assimilation, as well as increased xenophobic anti-Semitism, radical demands began to develop among the stateless Jewish population of eastern and central Europe for their own national home and refuge. In 1897, inspired by the Hungarian-born Jewish nationalist Theodor Herzl, the First Zionist Congress was held in Basle, and declared their national 'home' should be in Palestine. By the end of the period, the ideals of European nationalism had been exported worldwide and were now beginning to develop, and both compete and threaten the empires ruled by colonial European nation-states.