Poet Laureate Rita Dove's definition of a library at the entrance to the Maine State Library in Augusta, Maine

Rita Frances Dove (born August 28, 1952) is an American poet and author. From 1993 to 1995 she served as Poet Laureate Consultant in Poetry to the Library of Congress. She is the first African American to have been appointed since the position was created by an act of Congress in 1986 from the previous "consultant in poetry" position (1937–86). Dove also received an appointment as "special consultant in poetry" for the Library of Congress's bicentennial year from 1999 to 2000.[1] Dove is the second African American to receive the Pulitzer Prize for Poetry, in 1987, and she served as the Poet Laureate of Virginia[2] from 2004 to 2006.

Dove taught creative writing at Arizona State University from 1981 to 1989. She received the 1987 Pulitzer Prize in poetry. In 1992 she was named United States Poet Laureate [4] by the Librarian of Congress, an office she held from 1993 to 1995. At age 40, Dove was the youngest person to hold the position and is the first African American to hold the position since the title was changed to Poet Laureate (Robert Hayden had served as the first non-white Consultant in Poetry from 1976 to 1978, and Gwendolyn Brooks had been the last Consultant in Poetry in 1985–86). Early in her tenure as poet laureate, Dove was featured by Bill Moyers in a one-hour interview on his PBS prime-time program Bill Moyers Journal.[5] Since 1989 she has been teaching at the University of Virginia in Charlottesville, where she holds the chair of Commonwealth Professor of English.

Rita Dove also served as a Special Bicentennial Consultant in Poetry to the Library of Congress in 1999/2000, along with Louise Glück and W. S. Merwin. In 2004 then-governor Mark Warner of Virginia appointed her to a two-year position as Poet Laureate of Virginia.[6] In her public posts, Dove concentrated on spreading the word about poetry and increasing public awareness of the benefits of literature. As United States Poet Laureate, for example, she brought together writers to explore the African diaspora through the eyes of its artists.[7]

Dove was on the board of the Associated Writing Programs (AWP) (now "Association of Writers and Writing Programs") from 1985 to 1988. She led the organization as its president from 1986 to 1987. From 1994 to 2000 she was a senator (member of the governing board) of the national academic honor society Phi Beta Kappa. From 2006 to 2012 she served as a chancellor of the Academy of American Poets. Since 1991 she has been on the jury of the annual Anisfield-Wolf Book Awards—from 1991 to 1996 serving together with Ashley Montagu and Henry Louis Gates; and since 1997 with Gates, Joyce Carol Oates, Simon Schama, Stephen Jay Gould (until his death in 2002) and Steven Pinker (who replaced Gould in 2002).

Dove’s work cannot be confined to a specific era or school in contemporary literature; her wide-ranging topics and the precise poetic language with which she captures complex emotions defy easy categorization. Her most famous work to date is Thomas and Beulah, published by Carnegie-Mellon University Press in 1986, a collection of poems loosely based on the lives of her maternal grandparents, for which she received the Pulitzer Prize in 1987. She has published nine volumes of poetry, a book of short stories (Fifth Sunday, 1985), a collection of essays (The Poet's World, 1995), and a novel, Through the Ivory Gate (1992). 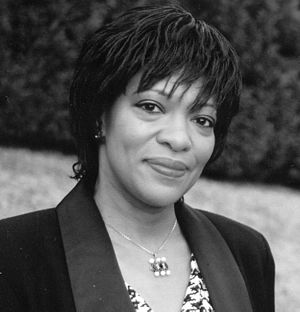 In 1994 she published the play The Darker Face of the Earth (revised stage version 1996), which premiered at the Oregon Shakespeare Festival in Ashland, Oregon in 1996 (first European production: Royal National Theatre, London, 1999). She collaborated with composer John Williams on the song cycle Seven for Luck (first performance: Boston Symphony, Tanglewood, 1998, conducted by the composer). For "America's Millennium", the White House's 1999/2000 New Year's celebration, Ms. Dove contributed — in a live reading at the Lincoln Memorial, accompanied by John Williams' music — a poem to Steven Spielberg's documentary The Unfinished Journey.[8]

Dove's latest and, to date, most ambitious collection of poetry, Sonata Mulattica,[9] was published in 2009. Over its more than 200 pages, it "has the sweep and vivid characters of a novel", as Mark Doty wrote in O, The Oprah Magazine.[10]

As Dove explained in her foreword and in media interviews, she had originally selected works by Plath, Ginsberg and Brown but these as well as some other poets were left out against her editorial wishes; their contributions had to be removed from print-ready copy at the very last minute because their publisher forbade their inclusion due to a disagreement with Penguin over permission fees. Critic Helen Vendler condemned Dove's choices, asking "why are we being asked to sample so many poets of little or no lasting value?".[14] Dove defended her choices and omissions vigorously in her response to Vendler in The New York Review of Books,[15] as well as in wide-ranging interviews with The Writer's Chronicle,[16] with poet Jericho Brown on the Best American Poetry website,[17] and with Bill Moyers on his public television show Moyers & Company.[18] The Boston Review continued the discussion from different angles with an aggressive attack by scholar Marjorie Perloff[19] and a spirited counter-attack by poet and scholar Evie Shockley, who took on both Vendler and Perloff.[20]

Besides her Pulitzer Prize, Rita Dove has received numerous literary and academic honors, among them 25 honorary doctorates (most recently, in 2014, from Yale University and, in 2013, from Emerson College[21] and Emory University[22]). She received the 1996 National Humanities Medal / Charles Frankel Prize from President Bill Clinton,[23] the 3rd Annual Heinz Award in the Arts and Humanities in 1997,[24] and more recently, the 2006 Common Wealth Award of Distinguished Service in Literature, the 2007 Chubb Fellowship at Yale University,[25] the 2008 Library of Virginia Lifetime Achievement Award,[26] the 2009 Fulbright Lifetime Achievement Medal,[27] the 2009 Premio Capri[28] and the 2011 National Medal of Arts from President Barack Obama.[29][30][31] In 2014 she was honored with the Carole Weinstein Prize in poetry.[32] In May 2016 she will receive the Stone Award for Lifetime Literary Achievement from Oregon State University.[33]

She has been a featured poet at the Geraldine R. Dodge Poetry Festival on many occasions, most recently in 2014. The annual "Rita Dove Poetry Award" was established by Salem College Center for Women Writers in 2004. The documentary film Rita Dove: An American Poet by Eduardo Montes-Bradley premiered at the Paramount Theater (Charlottesville, Virginia) on January 31, 2014.[34][35]

Dove married Fred Viebahn,[37] a German-born writer, in 1979. Their daughter Aviva Dove-Viebahn[38] was born in 1983. The couple are avid ballroom dancers,[39] and have participated in a number of showcase performances. Dove and her husband live in Charlottesville, Virginia.[citation needed]