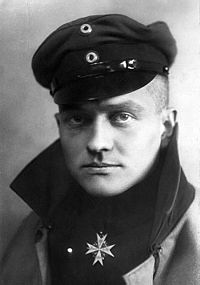 Rittmeister (German for "riding master" or "cavalry master") was a military rank of a commissioned cavalry officer in the armies of Germany, Austria-Hungary, Scandinavia, and some other countries. He was typically in charge of a squadron (a Company in the United States), and was the equivalent of a Hauptmann-rank (en: captain), comparable to NATO OF-2.[1][2] The various names of this rank in different languages (all Germanic) were:

The Dutch equivalent, Ritmeester, is still the official designation for officers in the cavalry branches of the Royal Dutch Army.[3]

The Norwegian equivalent, rittmester, still serves as the official designation for officers in the armoured and mechanized infantry branches of the Norwegian Army. In Sweden the rank was known as ryttmästare, and in Denmark (until 1951) as ritmester.

The armies of Poland, Finland, Lithuania and Russia adopted, but localised, the Germanic term for someone of similar rank. These were:

In the Polish army (from the 15th century to the mid-20th century) a rotmistrz commanded a formation called a rota. However, a rotmistrz of hussars was a commander of between 100 and 180 hussars, with a lieutenant of hussars as his second-in-command. The Lithuanian term was rotmistras[citation needed]. In earlier times the rotmistrz served as the commander of an infantry or cavalry company, though sometimes he would temporarily be assigned field rank tasks e.g. commanding an entire regiment or even a larger formation. In the cavalry the rank continued until 1945 as a company level title. Applied to the commander of a troop, it was equivalent of a modern-day captain.

The rank was also adopted by Russian New Regiments as rotmistr (ротмистр) and later formalized in Table of Ranks as the cavalry post; until 1798, a lower-ranking shtabs-rotmistr (штабс-ротмистр) also existed.