The River City Brass Band (River City Brass, RCB) is a modified British-style brass band based in Pittsburgh, Pennsylvania. The 28-piece ensemble tours extensively throughout the United States with more than 60 performances each year as part of community concert series across Western Pennsylvania. 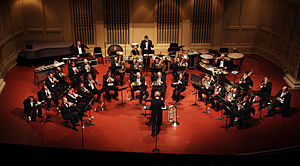 On November 21, 1981, under the baton of conductor Robert Bernat, the River City Brass took to the Carnegie Music Hall stage for its inaugural concert. Building upon the long-standing tradition of brass bands popularized in Great Britain and the United States, RCB features 25 brass players and 3 percussionists. RCB differs from most brass bands in that the instrumentation has been altered. French Horns are used instead of alto horns, and an Eb soprano trumpet is employed in place of a soprano cornet. The result of the soprano trumpet is a lighter, brighter, more "orchestral" sound than the traditional brass band. The Band has been a featured performer at the Adelaide Festival of the Arts (Australia), Musikfest (Pennsylvania), Chautauqua Institution (New York), New Zealand International Festival of the Arts, Interlochen Center for the Arts, (Michigan), and Thalian Hall (North Carolina), among many other venues across the world. Since 1986, River City Brass has run a youth program, known as the River City Youth Brass Band, which enables young musicians to hone their craft under the close supervision of professional players as part of the band's overall mission.

As of August 2010, River City Brass has been led by internationally renowned tuba soloist and British conductor, James Gourlay. 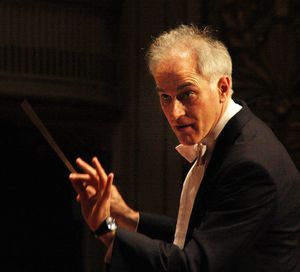 A list of the principal band members of the River City Brass Band as of 2015: