From Infogalactic: the planetary knowledge core
Jump to: navigation, search
This article is about the river which flows through Glasgow. For other rivers, see Clyde River (disambiguation). For the ship, see SS River Clyde.

The River Clyde (Scottish Gaelic: Abhainn Chluaidh, pronounced [avɪɲˈxlˠ̪uəj], Scots: Watter o Clydecode: sco is deprecated ) is a river in Scotland. It is the eighth longest river in the United Kingdom, and the second longest in Scotland. Flowing through the major city of Glasgow, it was an important river for shipbuilding and trade in the British Empire. In the early medieval Cumbric language it was known as Clud or Clut, and was central to the Kingdom of Strathclyde (Teyrnas Ystrad Clut).

The Clyde is formed by the confluence of two streams, the Daer Water (the headwaters of which are dammed to form the Daer Reservoir) and the Potrail Water. The Southern Upland Way crosses both streams before they meet at Watermeetings (grid reference NS953131) to form the River Clyde proper. At this point the Clyde is only 10 kilometres (6 miles) from Tweed's Well, the source of the River Tweed, and 13 kilometres (8 miles) from the Devil's Beef Tub, the source of the River Annan.

From there it snakes northeastward before turning to the west, its flood plain used for many major roads in the area, until it reaches the town of Lanark. On the banks of the Clyde, the industrialists David Dale and Robert Owen, built their mills and the model settlement of New Lanark. The mills harness the power of the Falls of Clyde, the most spectacular of which is Cora Linn. A hydroelectric power station still generates electricity here, although the mills are now a museum and World Heritage Site.

Catchment of the River Clyde

Tributaries of the River Clyde

Between the towns of Motherwell and Hamilton the course of the river has been altered to create an artificial loch within Strathclyde Park. Part of the original course can still be seen, and lies between the island and the east shore of the loch. The river then flows through Blantyre and Bothwell, where the ruined Bothwell Castle stands on a defensible promontory.

Past Uddingston and into the southeast of Glasgow the river begins to widen, meandering a course through Rutherglen and Dalmarnock. Flowing past Glasgow Green, the river is artificially straightened and widened through the centre, and although the new Clyde Arc now hinders access to the traditional Broomielaw dockland area, seagoing ships can still come upriver as far as Finnieston where the PS Waverley docks. From there, it flows past the shipbuilding heartlands, through Govan, Partick, Whiteinch, Scotstoun and Clydebank, all of which housed major shipyards, of which only two remain. The river flows out west of Glasgow, past Renfrew, and under the Erskine Bridge past Dumbarton on the north shore to the sandbank at Ardmore Point between Cardross and Helensburgh. Opposite, on the south shore, the river continues past the last Lower Clyde shipyard at Port Glasgow to Greenock where it reaches the Tail of the Bank as the river merges into the Firth of Clyde. At the mouth of the River Clyde there has been a significant issue of oxygen depletion in the water column.[1]

There are around 72 bridges (rail, road, foot and other) that cross the Clyde, from estuary to source. The valley of the Clyde was the focus for the G-BASE project from the British Geological Survey in the summer of 2010.

The success of the Clyde at the beginning of the Industrial Revolution was driven by the location of Glasgow, being a port facing the Americas. Tobacco and cotton trade began the drive in the early 18th century. However, the shallow Clyde was not navigable for the largest ocean-going ships and cargo had to be transferred at Greenock or Port Glasgow to smaller ships to sail upstream into Glasgow itself.

In 1768 John Golborne advised the narrowing of the river and the increasing of the scour by the construction of rubble jetties and the dredging of sandbanks and shoals. A particular problem was the division of the river into two shallow channels by the Dumbuck shoal near Dumbarton. After James Watt's report on this in 1769, a jetty was constructed at Longhaugh Point to block off the southern channel. This being insufficient, a training wall called the Lang Dyke was built in 1773 on the Dumbuck shoal to stop water flowing over into the southern channel. In the late 18th and early 19th centuries hundreds of jetties were built out from the banks between Dumbuck and the Broomielaw quay in Glasgow itself. In some cases this resulted in an immediate deepening as the constrained water flow washed away the river bottom; in others, dredging was required.[2][3]

In the mid-19th century engineers took on a much greater dredging of the Clyde, removing millions of cubic feet of silt to deepen and widen the channel. The major stumbling block in the project was a massive volcanic plug known as Elderslie Rock. As a result, the work was not completed until the 1880s. At this time, the Clyde also became an important source of inspiration for artists, such as John Atkinson Grimshaw and James Kay,[4] willing to depict the new industrial era and the modern world. 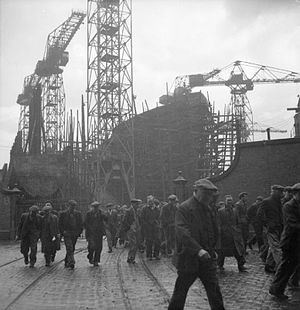 The completion of the dredging was well-timed; as steelworking grew in the city, the channel finally became navigable all the way up to Glasgow. Shipbuilding replaced trade as the major activity on the river and shipbuilding companies were rapidly establishing themselves on the river. Soon, the Clyde gained a reputation for being the best location for shipbuilding in the British Empire, and grew to become the world's pre-eminent shipbuilding centre. Clydebuilt became an industry benchmark of quality, and the river's shipyards were given contracts for prestigious ocean-going liners as well as warships, including the Queen Mary and the Queen Elizabeth 2 in later years, all built in the town of Clydebank.

From the founding of the Scott family's shipyard at Greenock in the year 1712 to the present day over 25,000 ships have been built on the River Clyde and its Firth and on the tributary River Kelvin and River Cart together with boatyards at Maryhill and Kirkintilloch on the Forth & Clyde Canal and Blackhill on the Monkland Canal. In the same time frame it is estimated that over 300 firms have engaged in shipbuilding on Clydeside although probably a peak of 30-40 at any one time.

The shipbuilding firms became 'household names' on Clydeside but also known around the world - Denny of Dumbarton, Scott of Greenock, Lithgows of Port Glasgow, Simon and Lobnitz of Renfrew, Alexander Stephen and Sons of Linthouse, Fairfield of Govan, Inglis of Pointhouse, Barclay Curle of Whiteinch, Connell and Yarrow of Scotstoun to name but a few. Almost as famous were the engineering firms that supplied the machinery to drive these vessels, the boilers and pumps and steering gear - Rankin & Blackmore, Hastie's and Kincaid's of Greenock, Rowan's of Finnieston, Weir's of Cathcart, Howden's of Tradeston and Babcock & Wilcox of Renfrew.

One Clyde 'shipyard' was not even located on one of these waterways - Alley & MacLellan's Sentinel Works in Jessie Street at Polmadie is around half a mile from the Clyde yet it is reputed to have constructed over 500 vessels, many of which were pre-assembled then 'knocked down' to kit form for despatch to some far distant and remote location - one such vessel being the SS Chauncy Maples, still in service on Lake Malawi. Clyde Shipbuilding reached its peak in the years just before WW1 and it is estimated that over 370 ships were completed in 1913.

The first recorded Clyde racing yacht, a 46-ton cutter, was built by Scotts of Greenock in 1803, and the great Scottish yacht designer William Fyfe did not start designing yachts until 1807. The first yacht club on the Clyde was the Northern Yacht Club, which appeared in 1824 and received its Royal Charter in 1831. The club was founded to organise and encourage the sport, and by 1825 Scottish and Irish clubs were racing against each other on the Clyde. However, yachting and yacht building didn't really take off until the middle of the 19th century.

The Clyde became famous worldwide for its significant contribution to yachting and yachtbuilding and was the home of many notable designers: William Fife III; Alfred Mylne; G L Watson; E McGruer; David Boyd. It was also the home of many famous yacht yards.

Robertson's Yard started repairing boats in a small workshop at Sandbank in 1876, and went on to become one of the foremost wooden boat builders on the Clyde. The 'golden years' of Robertson's yard were in the early 20th century when they started building classic 12- and 15-metre racing yachts. More than 55 boats were built by Robertson's in preparation for the First World War and the yard remained busy even during the Great Depression in the 1930s, as many wealthy businessmen developed a passion for yacht racing on the Clyde. During World War II the yard was devoted to Admiralty work, producing large, high-speed Fairmile Marine Motor Boats (MTB's - Motor Torpedo Boats- and MGB's - Motor Gun Boats). After the war the yard built the successful one-class Loch Longs and two David Boyd designed 12-metre challengers for the America's Cup: Sceptre[5] (1958) and Sovereign (1964). Due to difficult business conditions in 1965, the yard was turned over to GRP production work (mainly Pipers and Etchells) until it closed in 1980. During its 104-year history, Robertson's Yard built 500 boats, many of which are still sailing today. 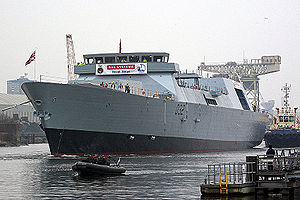 Although diminished from its early 20th century heights, shipbuilding remains an important industry on Clydeside

The downfall of the Clyde as a major industrial centre came during and post-World War II. Clydebank in particular was targeted by the Luftwaffe and sustained heavy damage. The immediate postwar period saw a severe reduction in warship orders which was balanced by a prolonged boom in merchant shipbuilding. By the end of the 1950s, however, the rise of other shipbuilding nations, recapitalised and highly productive, made many European yards uncompetitive. Several Clydeside yards booked a series of loss-making contracts in the hope of weathering the storm. However, by the mid-1960s, shipbuilding on the Clyde was becoming increasingly uneconomic and potentially faced collapse. This culminated in the closure of Harland and Wolff's Linthouse yard and a bankruptcy crisis facing Fairfields of Govan. The Government responded by creating the Upper Clyde Shipbuilders consortium. After the consortium's controversial collapse in 1971, the Labour government of James Callaghan later passed the Aircraft and Shipbuilding Industries Act which nationalised most of the Clyde's shipyards and grouped them with other major British shipyards as British Shipbuilders.

Today, two major shipyards remain in operation on the Upper Clyde; they are owned by the naval defence contractor, BAE Systems Surface Ships, which specialises in the design and construction of technologically advanced warships for the Royal Navy and other navies around the world. The two yards are the former Yarrow yard at Scotstoun and Fairfields at Govan. There is also the King George V Dock, operated by the Clyde Port Authority. On the Lower Clyde, the privately owned Ferguson Shipbuilders at Port Glasgow is the last survivor of the many shipyards that once dominated Port Glasgow and Greenock - its mainstay being the construction of car ferries.

The Clyde Waterfront Regeneration project is expected to attract investment of up to £5.6bn in the area from Glasgow Green to Dumbarton. Market gardens and garden centres have grown up on the fertile plains of the Clyde Valley. Tourism has also brought many back to the riverside, especially in Glasgow where former docklands have given way to housing and amenities on the banks in the city, for instance, the Glasgow Harbour project, the Glasgow Science Centre, and the creation of the Scottish Exhibition and Conference Centre. With the migration of the commercial Port of Glasgow downstream to the deeper waters of the Firth of Clyde, the river has been extensively cleaned up, once having a very poor reputation for pollution and sewage, in order to make it suitable for recreational use.

Shipyards of the Clyde