The southern reaches of the Fleet, flowing from Holborn Bridge, beneath Fleet Bridge, and into the Thames next to Bridewell Palace, as shown on the "Copperplate" map of London, surveyed between 1553 and 1559

The River Fleet is the largest of London's subterranean rivers. Its headwaters are two streams on Hampstead Heath, each of which was dammed into a series of ponds, the Hampstead Ponds and the Highgate Ponds, in the 18th century. At the southern edge of Hampstead Heath these descend underground as sewers and join in Camden Town. The waters flow 4 mi (6 km) from the ponds to the River Thames.

The river gives its name to Fleet Street, the eastern end of which is at what was historically the crossing over the river known as Fleet Bridge, and is now the site of Ludgate Circus.

The higher reaches of the river were known as the Holbourne (or Oldbourne), whence Holborn derived its name.[1]

The Fleet arises on Hampstead Heath as two sources, which still flow on the surface as the Hampstead Ponds and the Highgate Ponds. Then they go underground, pass under Kentish Town, join in Camden Town and flow onwards to King's Cross. King's Cross was originally named Battle Bridge, referring to an ancient bridge over The Fleet where Boudica's army is said to have fought an important battle against the Romans. The river then flows down Farringdon Road and Farringdon Street, and joins the Thames beneath Blackfriars Bridge.

Its name comes from the Anglo-Saxon flēot "tidal inlet".[2] In Anglo-Saxon times, the Fleet served as a dock for shipping.

In Roman times, the Fleet was a major river, with its estuary possibly containing the oldest tidal mill in the world.[3] In Anglo-Saxon times, the Fleet was still a substantial body of water, joining the Thames through a marshy tidal basin over 100 yards (91 m) wide at the mouth of the Fleet Valley. Many wells were built along its banks, and some on springs (Bagnigge Well, Clerkenwell) and St Bride's Well, were reputed to have healing qualities; in the 13th century the river was called River of Wells.[4]

The small lane at the south-west end of New Bridge Street is called Watergate because it was the river entrance to Bridewell Palace. By the 13th century, it was considered polluted, and the area characterised by poor-quality housing, and, later, prisons (Bridewell Palace itself, Newgate, Fleet and Ludgate prisons were all built in that area). The flow of the river was reduced greatly by increasing industry. As London grew, the river became increasingly a sewer. In 1728 Alexander Pope wrote in his Dunciad, "To where Fleet-ditch with disemboguing streams / Rolls the large tribute of dead dogs to Thames / The king of dykes! than whom no sluice of mud / with deeper sable blots the silver flood".[5] 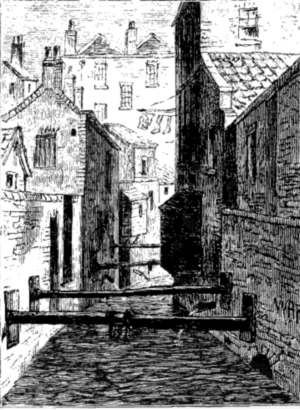 Following the Great Fire of London in 1666, Christopher Wren's proposal for widening the river was rejected. Rather, the Fleet was converted into the New Canal, completed in 1680 under the supervision of Robert Hooke. Newcastle Close and Old Seacoal Lane (now just short alleyways off Farringdon Street) recall the wharves that used to line this canal, especially used by the coastal coal trade from the North East of England. (An adjacent narrow road, Seacoal Lane, also existed until the late 20th century when the present building fronting onto Farringdon Street was built, perhaps suggesting that a new wharf had been built near the old one.) 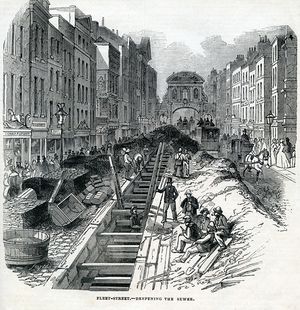 The upper canal, unpopular and unused, was from 1737 enclosed between Holborn and Ludgate Circus to form the "Fleet Market". The lower part, the section from Ludgate Circus to the Thames, had been covered by 1769 for the opening of the new Blackfriars Bridge and was consequently named "New Bridge Street".

The development of the Regent's Canal and urban growth covered the river in King's Cross and Camden from 1812. The Fleet Market was closed during the 1860s with the construction of Farringdon Road and Farringdon Street as a highway to the north and the Metropolitan Railway, while the final upper section of the river was covered when Hampstead was expanded in the 1870s.

The river gives its name to Fleet Street which runs from Ludgate Circus to Temple Bar at The Strand. During the 1970s, a planned London Underground tube was to lie under the line of Fleet Street and was originally named 'Fleet Line'. However this part of the route was not constructed when Sir Horace Cutler won a Conservative majority on the GLC and the line was terminated at Charing Cross and renamed as the Jubilee line to commemorate the Queen's Silver Jubilee of 1977. There were some objections to the cost of renaming the line and protest leaflets appeared with the slogan "Would Jubileeve It?".[citation needed] 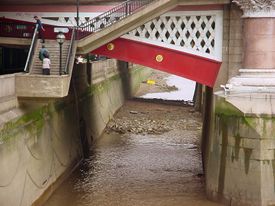 The mouth of the River Fleet today, appearing as a drainage outlet (obscured in shadow) in the embankment wall beneath Blackfriars Bridge

The Fleet, or rather the sewer that now follows its route, can be heard through a grating in Ray Street, Clerkenwell[6] in front of the Coach and Horses pub, just off Farringdon Road. The position of the river can still be seen in the surrounding streetscape with Ray Street and its continuation Warner Street lying in a valley where the river once flowed. It can also be heard through a grid in the centre of Charterhouse Street where it joins Farringdon Road (on the Smithfield side of the junction). In wet weather (when the sewer system is overloaded), and on a very low tide, the murky Fleet can be seen gushing into the Thames from the Thameswalk exit of Blackfriars station, immediately under Blackfriars bridge. (The tunnel exit shown in the picture can be seen much more clearly from directly above.)

The Mayor of London, Boris Johnson, has proposed opening short sections of the Fleet and other rivers for ornamental purposes,[7] although the Environment Agency, which manages the project, is pessimistic that the Fleet can be among those uncovered.[8]

File:New–Canal 1728.jpg
Bridge over the New Canal at Holborn. The bathers are included as a satirical reference to the poor quality of the water. Illustration from Alexander Pope's Dunciad (1728).

In 1710 Jonathan Swift (author of "Gullivers Travels") mentioned the filth in the Fleet during a storm in a poem:

as described by Paul Talling in his book and website "London's Lost Rivers".[9]

Ben Jonson's poem "On the Famous Voyage[10] (discussed in Andrew McRae's article, cited below) provides a mock-epic account of a journey along the excrement-lined ditch during the early seventeenth century.

The 19th-century River Fleet is part of one of the settings a story of the Doctor Who serial "The Talons of Weng-Chiang", starring Tom Baker: in one episode the Doctor claims he once caught a large salmon in the Fleet, which he shared with the Venerable Bede. It is also mentioned in the Eighth Doctor audio adventure Dead London.

The Christopher Fowler crime thriller The Water Room uses the River Fleet as a major setting.

In Neil Gaiman's television serial and novel Neverwhere, the Great Beast of London is said to be a feral boar hog that ran into the Fleet while it was still partially open to the air, and vanished underground into the depths of London Below, growing huge and fat off the sewage.

In The Devlin Diary by Christi Phillips the Fleet is a major part of the story as one of the characters works to build filters to rid the river of the long despised sewage.

In the detective novel Thrones, Dominations, set in 1936 London, Lord Peter Wimsey and Police Superintendent Charles Parker descend into the Fleet and nearby subterranean rivers, in search of the body of a murder victim - and barely escape drowning when a sudden heavy rain causes a flood underground.

In Dickens' Oliver Twist, Fagin's lair is on Saffron Hill, adjacent to the Fleet (and in some adaptations, reached by a footbridge across it, which collapses under the weight of pursuers).

The River Fleet is also mentioned in the novel Rivers of London by Ben Aaronovitch, as well as Blue Monday by crime novelist Nicci French.

In The Door in the Wall, Marguerite de Angeli's juvenile fiction set in early 14th century England, Brother Luke soothes lame Robin's anger at being called Crookshanks by explaining to him that they are all named for some quality unique to themselves. He gives as an example Geoffry Atte-Water "because he lives by the River Fleet and tends the conduit there with his father."

The 1966 Modesty Blaise strip cartoon story The Head Girls features the underground section of the River Fleet, where Modesty and Willie Garvin are tethered by the villainous Gabriel in the expectation that the rising tide will drown them.

The 2003–2004 Baroque Cycle, Neal Stephenson's three volumes series set in the late 17th and early 18th centuries, has many references to the Fleet "Ditch", including discussion of the polluted state of the waterway.

"London Underground," a 2014 episode of BBC One drama New Tricks, features a story line about a murder by an occult group in the 1970s who believed that the River Fleet demanded human sacrifices.