The River Frome /ˈfruːm/ is a river in Dorset in the south of England. At 30 miles (48 km) long it is the major chalkstream in southwest England. It is navigable upstream from Poole Harbour as far as the town of Wareham.

The river rises in the Dorset Downs at Evershot, passes through Maiden Newton, Dorchester, West Stafford and Woodsford. At Wareham it and the River Piddle, also known as the River Trent, flow into Poole Harbour via the Wareham Channel. The catchment area is 181 square miles (454 km²) map, approximately one sixth of the county.

East of Dorchester the river runs over sands, clays and gravels which overlie the chalk; as the valley gradient is gentle the Frome has deposited much sediment here and thus created a broad flood plain. Historically this contained marshes and gave the name to the Durotriges, water dwellers, the Celtic tribe of Dorset. The river forms a wide, shallow ria at its estuary, Poole Harbour.

Prior to the end of the last ice age the Purbeck Hills were continuous with the Isle of Wight and the Frome would have continued east through what is now Poole Harbour and Poole Bay, into The Solent, collecting the Stour, Beaulieu, Test and Itchen, before flowing into the Channel east of what is now the Isle of Wight.

At the end of the 1st century AD the Romans built a 12 mile (19 km) aqueduct to supply public fountains and public baths at their new town of Durnovaria (Dorchester).[2] Taking the form of an open channel cut into the underlying chalk, the aqueduct took water from the Frome upstream near Notton (between modern-day Maiden Newton and Frampton) and closely followed the contours of the valley side to the southwest of the river.[2][3][4] Over its course the aqueduct only fell 25 feet (7.6 m), some 60 feet (18 m) less than the river itself. It has been calculated that water would have reached Durnovaria at the rate of 8 million gallons per day.[3] Some traces of the aqueduct terrace can still be seen at Bradford Peverell and on the Dorchester by-pass. 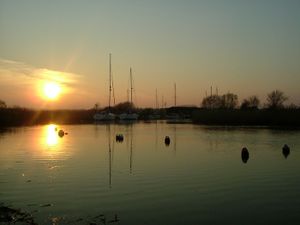 The Frome estuary at Wareham

The Danes made frequent raids up the river. The town walls at Wareham were built in 876AD, possibly by Alfred the Great, to defend the town against this threat.

Until the late 19th century the river was an important part of the trade route for the export of Purbeck Ball Clay from the Isle of Purbeck. Originally the clay was brought to wharves at Wareham by pack horse from the clay pits to the south. In around 1830 the Furzebrook Railway was built, connecting the pits to a wharf at Ridge. This route was eventually superseded by the use of the main line rail network, and eventually by road.

The Frome has suffered a dramatic decline in the run of salmon in recent years. In 1988 over 4000 fish ran the river, by 2004 the run had fallen to 750 fish. This is partly due to obstacles at the Bindon Mill hatches and Louds Mill weir and partly to changed agricultural methods[citation needed]. The Game & Wildlife Conservation Trust is carrying out research at its Salmon & Trout Research Centre at East Stoke into the decline of Atlantic Salmon to understand the causes and how to reverse the decline.