From Infogalactic: the planetary knowledge core
(Redirected from River Humber)
Jump to: navigation, search
For other uses, see Humber (disambiguation). 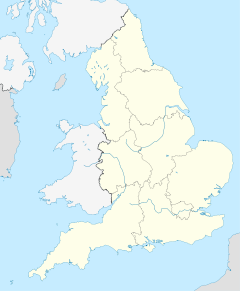 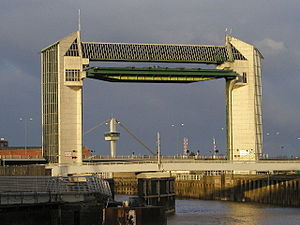 River Hull tidal barrier. Situated at the end of the River Hull where it meets the Humber 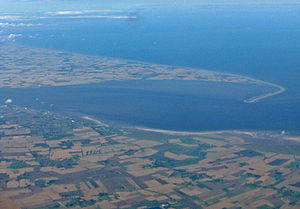 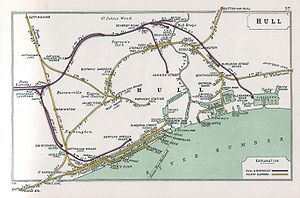 The Humber /ˈhʌmbər/ is a large tidal estuary on the east coast of Northern England. It is formed at Trent Falls, Faxfleet, by the confluence of the tidal rivers Ouse and Trent. From here to the North Sea, it forms part of the boundary between the East Riding of Yorkshire on the north bank and North Lincolnshire and North East Lincolnshire on the south bank. Although the Humber is an estuary from the point at which it is formed, many maps show it as the River Humber.[2]

Below Trent Falls, the Humber passes the junction with the Market Weighton Canal on the north shore, the confluence of the River Ancholme on the south shore; between North Ferriby and South Ferriby and under the Humber Bridge; between Barton-upon-Humber on the south bank and Kingston upon Hull on the north bank (where the River Hull joins), then meets the North Sea between Cleethorpes on the Lincolnshire side and the long and thin (but rapidly changing) headland of Spurn Head to the north.

Ports on the Humber include the Port of Hull, Port of Grimsby, Port of Immingham, as well as lesser ports at New Holland and North Killingholme Haven. The estuary is navigable here for the largest of deep-sea vessels. Inland connections for smaller craft are extensive but handle only one quarter of the goods traffic handled in the Thames.[3]

The Humber is now an estuary. When the world sea level was lower during the Ice Ages, the Humber had a long freshwater course across what was then the dry bed of the North Sea.[citation needed]

From 1974 to 1996, the areas now known as East Riding, North Lincolnshire and North East Lincolnshire constituted the county of Humberside.

The estuary's only modern crossing is the Humber Bridge, which was once the longest single-span suspension bridge in the world. Now it is the seventh longest.

Before the bridge was built in 1981, a series of paddle steamers operated from the Corporation Pier railway station[6] at the Victoria Pier in Hull to the railway pier in New Holland. Steam ferries started in 1841, and in 1848 were purchased by the Manchester, Sheffield and Lincolnshire Railway. They, and their successors, ran the ferry until the bridge opened in 1981.[6] Although the railway to New Holland closed in 1977, passenger and car traffic continued to use the pier until the end of ferry operations.[7]

The line of the bridge is similar to an ancient ferry route from Hessle to Barton upon Humber, which is noted in the Domesday Book and in a charter of 1281. The ferry was recorded as still operating in 1856, into the railway era.[8] The Humber was then a mile across.[9]

The Humber Forts were built in the mouth of the river for the First World War. Planned in 1914, their construction started in 1915 and they were not completed until 1919.[10][11] A coastal battery at Easington, Fort Goodwin or Kilnsea Battery, faced the Bull Sands Fort.[12] They were also garrisoned during the Second World War, and were finally abandoned for military use in 1956.

Fort Paull is further downstream, a Napoleonic-era emplacement replaced in the early 20th century by Stallinborough Battery opposite Sunk Island.[13]

Graham Boanas, a Hull man, is believed to be the first man to succeed in wading across the Humber since ancient Roman times. The feat, in August 2005, was attempted to raise cash and awareness for the medical research charity, DebRA. He started his trek on the north bank at Brough; four hours later, he emerged on the south bank at Whitton. He is 6 feet 9 inches (205.74 cm) tall and took advantage of a very low tide.[14] He replicated this achievement on the television programme Top Gear (Series 10 Episode 6) when he raced James May who drove an Alfa Romeo 159 around the inland part of the estuary without using the Humber Bridge.

On 8 September 1927 Miss Alice Blowman, aged 19, entered the water at New Holland Pier at 4.30 pm and arrived at Victoria Pier Hull at 6.40 pm. She was the first woman to successfully swim across the River Humber, unassisted in any way. Her recognition was endorsed by a presentation from the Hull City Police Sports Club at a presentation ceremony in November 1927. Alice Bainton (née Blowman) died on Christmas Day in 1999 aged 90, leaving behind a significant number of swimming trophies collected throughout her swimming career and now cherished by her family.[15]

Since 2011 Warners Health have organised the 'Warners Health Humber Charity Business Swim'. Twelve swimmers from companies across the Yorkshire region train and swim in an ellipse from the south bank to the north bank of the river under the Humber Bridge over a swim approximately 1.5 miles (2.4 km) miles in length.[16] 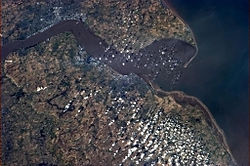 The Humber from the International Space Station

This river's name is recorded in Anglo-Saxon times as Humbre (Anglo-Saxon ) and Humbri (Vulgar Latin dative) / Umbri (Classical Latin dative). The Humber was once known as the Abus, for example in Edmund Spenser's The Faerie Queene. The Latin name Abus (probably from Latin verb Abdo which means to cover with shadows) has the meaning of black/dark river. The successive name Humbre/Humbri/Umbri could continue to have the same meaning; in fact, the Latin verb umbro means "to cover with shadows" with the sense of black/dark river.[17] Another hypothesis is that, since its name recurs in "Humber Brook" near "Humber Court" in Herefordshire or Worcestershire, the word humbr- may have been a word that meant "river", or something similar, in an aboriginal language that had been spoken in England before the Celts migrated there (compare Tardebigge). An element *ambri- 'channel, river' is reconstructible for proto-Celtic and the Ancient Celtic prefix *su- 'good' routinely developed into Welsh *hy-.

The Humber features regularly in Geoffrey of Monmouth's 12th-century fictional chronicle Historia Regum Britanniae. According to Geoffrey, the Humber, invariably referred to by the Latin word for river, was named after "Humber the Hun," who drowned there while trying to invade in the earliest days of Britain's settlement.