From Infogalactic: the planetary knowledge core
Jump to: navigation, search
This article is about the river in England. For the river in Ireland, see River Lee. For the Adele song, see 25 (Adele album).

The River Lea (or Lee) in England originates in Marsh Farm, Leagrave, Luton in the Chiltern Hills and flows generally southeast, east, and then south through east London where it meets the River Thames, the last section being known as Bow Creek. It is one of the largest rivers in London and the easternmost major tributary of the Thames. Its valley creates a long chain of marshy ground along its lower length, much of which has been used for gravel and mineral extraction, reservoirs and industry. The river has been canalised to provide a navigable route for boats into eastern Hertfordshire, known as the Lee Navigation. While the lower Lea remains somewhat polluted, its upper stretch and tributaries, classified as chalk streams, are a major source of drinking water for London. A diversion known as the New River, opened in 1613, abstracts clean water away from the lower stretch of the river for drinking.[1] Its origins in the Chilterns contribute to the extreme hardness (high mineral content) of London tap water.[2]

The name of the River Lea was first recorded in the 9th century, although is believed to be much older. Spellings from the Anglo-Saxon period include Lig(e)an in 880 and Lygan in 895, and in the early medieval period it is usually Luye or Leye. It seems to be derived from a Celtic root lug-meaning 'bright or light' which is also the derivation of a name for a deity, so the meaning may be 'bright river' or 'river dedicated to the god Lugus'.[3][4]

The spelling Lea predominates west (upstream) of Hertford, but both spellings (Lea and Lee) are used from Hertford to the River Thames. The Lee Navigation was established by Acts of Parliament and only that spelling is used in this context. The Lee Valley Regional Park Authority also uses this spelling for leisure facilities. However, the spelling Lea is used for road names, locations and other infrastructure in the capital, such as Leamouth, Lea Bridge, the Lea Valley Walk and the Lea Valley Railway Lines. This spelling is also used in geology, archaeology, etc. to refer to the Lea Valley. The divergent spellings of the river are also reflected in the place-names of Luton and Leyton: both mean "farmstead on the River Lea".[5] 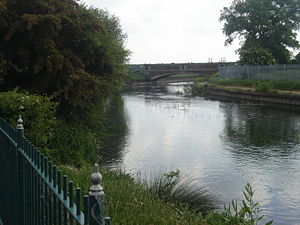 The source is usually said to be at Well Head inside Waulud's Bank at Leagrave, but there the River Lea is also fed by Houghton Brook, a stream that starts 2 miles (3.2 km) further west in Houghton Regis. The river flows through (or by) Luton, Harpenden, Welwyn Garden City, to Hertford where it changes from a small shallow river to a deep canal at Hertford Castle Weir, which then flows on to Ware, Stanstead Abbotts, Hoddesdon, Broxbourne, Cheshunt, Waltham Abbey, Enfield Lock, Ponders End, Edmonton, Chingford, Tottenham, Walthamstow, Upper Clapton, Leyton, Hackney Wick, Stratford, Bromley-by-Bow (past Fish Island), Poplar, Canning Town and finally Leamouth where it meets the River Thames (as Bow Creek). It forms the traditional boundary between the counties of Middlesex and Essex, and was used for part of the Danelaw boundary. It also forms part of the boundary between Essex and Hertfordshire. 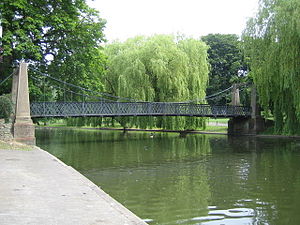 A pedestrian suspension bridge spans the boating lake created where the widened river flows through Wardown Park in Luton.

For much of its distance the river runs within or as a boundary to the Lee Valley Park. Between Tottenham and Hackney the Lea feeds Tottenham Marshes, Walthamstow Marshes and Hackney Marshes (the latter now drained). In their early days, Tottenham Hotspur and Leyton Orient played their matches as football amateurs on the Marshes. South of Hackney Wick the river's course is split, running almost completely in man made channels (originally created to power water mills, the Bow Back Rivers) flowing through an area that was once a thriving industrial zone.

Inside Greater London below Enfield Lock the river forms the boundary with the former Royal Small Arms Factory, now known as Enfield Island Village, a housing development. Just downstream the river is joined by the River Lee Flood Relief Channel. The man-made, concrete-banked watercourse is known as the River Lee Diversion at this point as it passes to the east of a pair of reservoirs: the King George V Reservoir at Ponders End/Chingford and William Girling Reservoir at Edmonton known collectively as the Chingford Reservoirs; and to the west of the Banbury Reservoir at Walthamstow. At Tottenham Hale there is a connected set of reservoirs; Lockwood Reservoir, High Maynard Reservoir, Low Maynard Reservoir, Walthamstow Reservoirs, East Warwick Reservoir and West Warwick Reservoir. It also passes the Three Mills, a restored tidal mill near Bow. 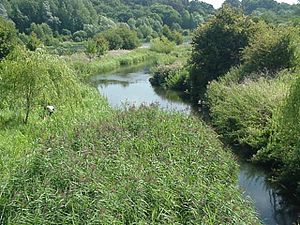 The River Lea at Amwell, home of the Amwell Magna Fishery, was fished by Izaak Walton - author of The Compleat Angler 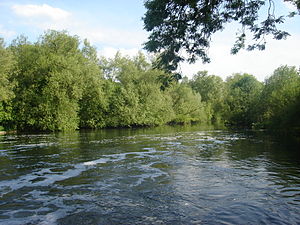 The river below Kings Weir 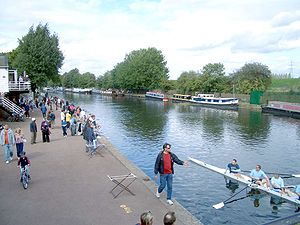 Rowing boats on the River Lea 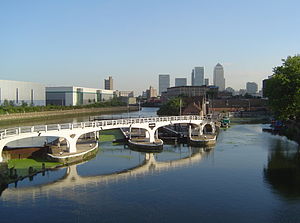 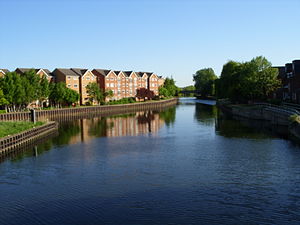 The river flows south from Tottenham Lock. The large housing development to the west, Bream Close, is situated on a small island in the river, whilst in the distance the Gospel Oak to Barking Line crosses the river on a high bridge.

In the Roman era, Old Ford, as the name suggests, was the ancient, most downstream, crossing point of the River Lea. This was part of a pre-Roman route that followed the modern Oxford Street, Old Street, through Bethnal Green to Old Ford and thence across a causeway through the marshes, known as Wanstead Slip (now in Leyton). The route then continued through Essex to Colchester. At this time, the Lea was a wide, fast flowing river, and the tidal estuary stretched as far as Hackney Wick.[6] Evidence of a late Roman settlement at Old Ford, dating from the 4th and 5th centuries, has been found.

Somewhere between 878 and 890 the Treaty of Alfred and Guthrum was drawn up that amongst other things used the course of the Lea to define the border between the Danes and the English. In 894, a force of Danes sailed up the river to Hertford,[7] and in about 895 they built a fortified camp, in the higher reaches of the Lea, about 20 miles (32.2 km) north of London. Alfred the Great saw an opportunity to defeat the Danes and ordered the lower reaches of the Lea drained, at Leamouth. This left the Danes' boats stranded, but also increased the flow of the river and caused the tidal head to move downriver to Old Ford.

In 1110, Matilda, wife of Henry I, reputedly took a tumble at the ford, on her way to Barking Abbey and ordered a distinctively bow-shaped, three-arched, bridge to be built over the River Lea (The like of which had not been seen before), at Bow. During the Middle Ages, Temple Mills, Abbey Mills, Old Ford and Bow were the sites of water mills (mainly in ecclesiastic ownership) that supplied flour to the bakers of Stratforde-atte-Bow, and hence bread to the City. It was the channels created for these mills that caused the Bow Back Rivers to be cut through the former Roman stone causeway at Stratford (from which the name is derived).

Improvements were made to the river from 1424, with tolls being levied to compensate the landowners, and in 1571, there were riots after the extension of the River was promoted in a private bill presented to the House of Commons. By 1577, the first lock was established at Waltham Abbey and the river began to be actively managed for navigation.

The New River was constructed in 1613 to take clean water to London, from the Lea and its catchment areas in Hertfordshire and bypass the polluting industries that had developed in the Lea's downstream reaches.[8] The artificial channel further reduced the flow to the natural river and by 1767 locks were installed below Hertford Castle Weir on the canalised part of the Lea, now the Lee Navigation with further locks and canalisation taking place during the succeeding centuries. In 1766, work also began on the Limehouse Cut to connect the river, at Bromley-by-Bow, with the Thames at Limehouse Basin.[8]

The River Lea flows through the old brewing and malting centre of Ware, and consequently transport by water was for many years a significant industry based there. Barley was transported into Ware, and malt out via the river, in particular to London. Bargemen born in Ware were given the "freedom of the River Thames" — avoiding the requirement of paying lock dues — as a result of their transport of fresh water and food to London during The Great Plague of 1665–66. A local legend says that dead bodies were brought out of London at that time via the river for burying in Ware, but there is no evidence for this.[9]

The Waterworks River, a part of the tidal Bow Back Rivers, has been widened by 8 metres (26 ft) and canalised to assist with construction of the Olympic Park for the 2012 Summer Olympics. In 2009, Three Mills Lock was installed on the Prescott Channel to maintain water levels on the Lea, within the park at a depth of 2 metres (7 ft). This will allow access by 350–tonnes barges to ensure that at least 50% of the material required for construction to be delivered, or removed by water. (These figures are under review. It is stipulated that the governing body has re appraised these figures)[10]

On 5 August 2005, a Canada goose was pulled underwater very quickly, as observed by some boat trippers. Several cygnets have also mysteriously disappeared and it was suggested that the creature responsible was a large fish or caiman. The goose's attacker was speculated to have been a crocodile as a pike would probably not have been able to take such large prey; authorities however strenuously denied that there might be a crocodile in the river.[11]

On 13 December 2011, a similar attack occurred when another Canada goose went "vertically down". Observed by two boat trippers on a section of the Old River Lea close to the 2012 Olympic Stadium, the 7 kilograms (15 lb) goose vanished "in the space of half a second". The observers did not see any sign of the creature. Again a pike or mink was suggested, in view of their predation upon ducks, although it was still argued that a goose would be much too large for such a fish. Yet again, British Waterways stressed the absence of a crocodile. It was presumed that the creature was still at large, if it existed at all.[12] Other suggestions for the predator have been a snapping turtle or a wels catfish (which are known to exist in small numbers in the Thames and its tributaries).[13]

The poem A Tale of Two Swannes is set along the River Lee. It was written by William Vallans and published in 1590.[14] The river also features in the early chapters of The Compleat Angler by Izaak Walton.

A guide to walking along the river valley was written by Leigh Hatts,[15] and an account of a walk along the complete length of the river in 2009 was published as a blog by "Diamond Geezer".[16]

In 2014, German writer Esther Kinsky published a novel, Am Fluß ("Along the River"),[17] based around her walks along the River Lea beginning at Horseshoe Point and ending at the river's mouth where it joins the Thames.

A documentary about the river was presented by Griff Rhys Jones and broadcast by the BBC in 2009.[18]

Two episodes of the 2008 television programme The Compleat Angler presented by Geoffrey Palmer and Rae Borras feature the river. [19]

On November 20th, 2015, Adele released her album 25, including a song entitled "River Lea" whose lyrics refer to the river as a symbol of roots, history and change.[20]