The Somme is a river in Picardy, northern France. The name Somme comes from a Celtic word meaning “tranquility”. The department Somme was named after this river.

The river is 245 km (152 mi) long, from its source in the high ground of the former Forest of Arrouaise at Fonsommes near Saint-Quentin, to the Bay of the Somme, in the English Channel. It lies in the geological syncline which also forms the Solent. This gives it a fairly constant and gentle gradient where several fluvial terraces have been identified.[1] 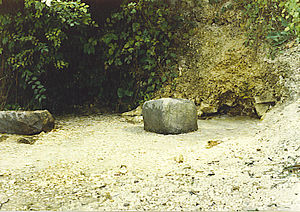 The source of the Somme at Fonsommes.

Départements and towns along the river 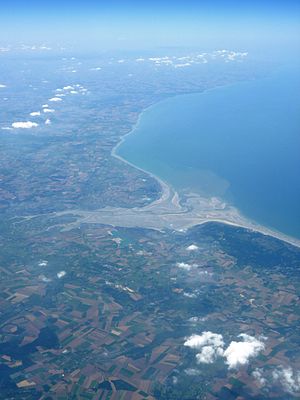 The mouth of the Somme in the English Channel 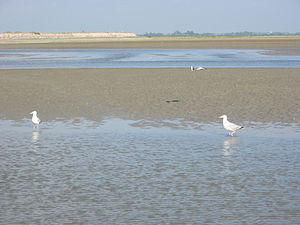 The estuary is now much smaller than it once was but still extensive.

The river is characterized by a very gentle gradient and a steady flow. The valley is more or less steep-sided but its bottom is flat with fens and pools. These characteristics of steady flow and flooded valley bottom arise from the river's being fed by the ground water in the chalk basin in which it lies. At earlier, colder times, from the Günz to the Würm (Beestonian or Nebraskan to Devensian or Wisconsinian) the river has cut down into the Cretaceous geology to a level below the modern water table. The valley bottom has now therefore, filled with water which, in turn, has filled with fen. This picture, of the source of the Somme in 1986, shows it when the water table had fallen below the surface of the chalk in which the aquifer lies. Here, the flow of water had been sufficient to keep fen from forming.

This satellite photograph shows the fenny valley crossing the chalk to the sea on the left. The sinuous length at the centre of the picture lies downstream from Péronne.

One of the fens, the Marais de l'Île is a nature reserve in the town of St.Quentin. The traditional market gardens of Amiens, the Hortillonages are on this sort of land but drained. Once exploited for peat cutting, the fen is now used for fishing and shooting

The construction of the Canal de la Somme began in 1770 and reached completion in 1843. It is 156 km (97 mi) long, beginning at St.Simon and opening into the Bay of the Somme. From St.Simon to Froissy (near Bray sur Somme, south of Albert), the canal is alongside the river. Thence to the sea, the river is partly river and partly navigation. From Abbeville, it is diverted through the silted, former estuary, to Saint-Valery-sur-Somme, where the maritime canal, once called the canal du Duc d'Angoulême enters the English Channel. 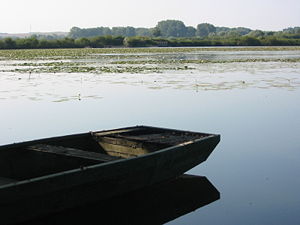 An example of the lakes formed in the fen of the valley bottom. They attract wildfowlers and anglers.

In 2001, the Somme valley was affected by particularly high floods, which were in large part due to a rise in the water table of the surrounding land. 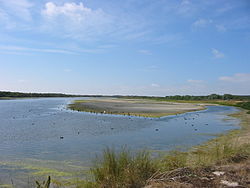 The Marquenterre bird sanctuary at the mouth of the river