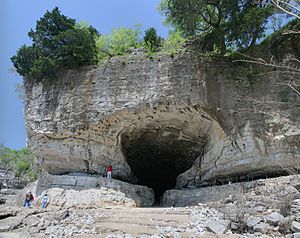 Cave-In-Rock, formerly the home of river pirates along the Ohio River.

A river pirate is a type of pirate who operates along a river. The term river pirate has been used to describe many different kinds of pirate groups which carry out attacks all over the world.

In Asia, river piracy is a problem, even in the present-day, particularly in the southeast, where the Mekong River massacre occurred in 2011.[1][2][3]

On the Balkans, in the Middle Ages, Narentines were known for their piracy using the river Neretva. During the reign of Tsar Ivan the Terrible, the legendary Yermak Timofeyevich was a Russian Cossack river pirate, along the Volga (or possibly Don) River and later moved east to become the "Conqueror of Siberia". Today, piracy is present on the Danube River, in Serbia and in Romania.

River piracy, in late 18th and mid-19th century America, was primarily concentrated along the Ohio River and Mississippi River valleys. River pirates usually operated in isolated, frontier settlements, which were sparsely populated areas lacking the protection of civil authority and institutions. They resorted to a variety of tactics, depending on the number of pirates and size of the boat crews involved, including: deception, concealment, ambush, and assaults in open combat, near natural obstacles and curiosities, such as shelter caves, islands, river narrows, rapids, swamps, and marshes. River travelers were robbed, captured, and murdered and their livestock, slaves, cargo, and flatboats, keelboats, and rafts were sunk or sold down river.

After the Revolutionary War, American river piracy began to take root, in the mid-1780s, along the upper Mississippi River, between Spanish Upper Louisiana, around St. Louis, down to the confluence of the Ohio River, at Cairo.

In 1803, at Tower Rock, the U.S. Army dragoons, possibly, from the frontier army post up river at Fort Kaskaskia, on the Illinois side opposite St. Louis, raided and drove out the river pirates.

Starting in the late 1790s, Stack Island became associated with river pirates and counterfeiters. In 1809, the last major river pirate activity, on the Upper Mississippi River, came to an abrupt end, when a group of flatboatmen, meeting at the head of the "Nine Mile Reach," decided to make a raid on Stack Island and wipe out the river pirates. They attacked at night, a battle ensued, and two of the boatmen and several outlaws were killed. The attackers captured 19 other men, a 15-year-old boy and two women. The women and teenager were allowed to leave. The remaining outlaws are presumed to have been executed.

From 1790-1834, Cave-In-Rock was the principal outlaw lair and headquarters of river pirate activity in the Ohio River region. The notorious cave, is today, within the peaceful confines of Illinois' Cave-in-Rock State Park. In 1797, it was anything but peaceful, as Samuel Mason, who was initially a Revolutionary War Patriot captain in the Ohio County, Virginia militia and a former associate judge and squire in Kentucky, led a gang of highway robbers and river pirates on the Ohio River. Mason started his criminal organization in Red Banks and was driven out by regulators, sweeping through western Kentucky and first set up his new operation at Diamond Island, followed by Cave-In-Rock, and later, along the Mississippi River, from Stack Island to Natchez.

During Samuel Mason's 1797-1799 occupation of Cave-In-Rock and after his departure, the name of Bully Wilson became associated with cave; a large sign was erected near the natural landmark's entrance, "Liquor Vault and House for Entertainment." Wilson may have been an alias for Mason, a front man for his criminal operation, or another outlaw leader who ran a gang of pirates in the region. The Harpe Brothers who were allegedly America's first serial killers, were highwaymen, on the run from the law in Tennessee and Kentucky and briefly, joined Samuel Mason's gang at Cave-In-Rock. Peter Alston, the son of American counterfeiter, Philip Alston who through his father, became a river pirate and highwayman at Cave-In-Rock and made the acquaintance of Samuel Mason and Wiley Harpe, following them to Stack Island and Natchez. Around the late 1700s to early 1800s, on the Illinois side of the Ohio River, north of Cave-In-Rock, Jonathan Brown led a small gang of river pirates at Battery Rock.

The lower Ohio River country was routinely, patrolled by the Legion of the United States and U.S. Army troops, garrisoned at Fort Massac, as constabulary against Native Americans, colonial raiders from Spanish Upper Louisiana Territory, and river outlaws in the region.

Between 1790 and 1820, the legendary Colonel Plug also, known as Colonel Fluger, ran a gang of river pirates on the Ohio River, in a cypress swamp, near the mouth of the Cache River, which was below Cave-In-Rock and Fort Massac and just above the confluence of the Ohio and Mississippi Rivers. Plug's tactics were to sneak aboard, personally, or have one of his pirates, secretly, go into the hull of a boat and either, dig out the caulking between the floor planks or drill holes with an auger, causing the boat to sink and be easily attacked. The boat and the cargo would later be sold down river.

James Ford, an American Ohio River civic leader and businessman, secretly led a gang of river pirates and highwaymen from the 1820s to the mid-1830s, on the Ohio River, in Illinois and Kentucky.

River piracy continued on the lower Mississippi River, from the early 1800s to the mid 1830s, these river pirates were mainly, organized into large gangs similar to Samuel Mason's organization around Cave-In-Rock or smaller gangs under the operation of John A. Murrell, which also, existed, from the 1820s to the mid-1830s, between Stack Island and Natchez, in the state of Mississippi.

The decline of river piracy occurred, over time, as a result of direct military action taken and the combined strength of local law enforcement and regulator-vigilante groups, that uprooted and swept out pockets of outlaw resistance.

River pirates operated in the Great Lakes during the America's earliest history and during the Timber Rebellion of 1853, the term was applied to the so-called "timber pirates", from their activities on the Mississippi River and the Great Lakes.