From Infogalactic: the planetary knowledge core
Jump to: navigation, search
This article is about the stadium in Cincinnati. For other facilities of the same name in New Jersey and Iowa, see Bears & Eagles Riverfront Stadium and Riverfront Stadium (Waterloo).
File:110006713 5aba7e8f86 o.jpg
The stadium seen from above in 1980 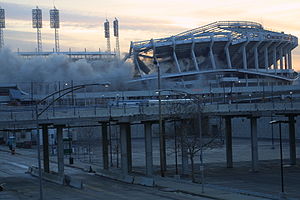 December 29, 2002 implosion
File:Cinergylot.png
The Riverfront Stadium site in June 2006. This photo was taken from the western concourse of Great American Ball Park. A small portion of the Riverfront Stadium site is now occupied by the Reds' Hall of Fame and Museum and Main Street, which was extended when the new park was built. The Cincinnati Bengals' Paul Brown Stadium is in the distance.

Riverfront Stadium, also known as Cinergy Field from 1996 to 2002, was a multi-purpose stadium in Cincinnati, Ohio, United States that was the home of the Cincinnati Reds of Major League Baseball from 1970 through 2002 and the Cincinnati Bengals of the National Football League from 1970 to 1999. Located on the Ohio River in downtown Cincinnati, the stadium was best known as the home of "The Big Red Machine", as the Reds were often called in the 1970s.

Construction began on February 1, 1968, and was completed at a cost of less than $50 million. On June 30, 1970, the Reds hosted the Atlanta Braves in their grand opening, with Hank Aaron hitting the first ever home run at Riverfront. Two weeks later on July 14, 1970, Riverfront hosted the 1970 Major League Baseball All-Star Game. This game is best remembered for the often-replayed collision at home plate between Reds star Pete Rose and catcher Ray Fosse of the Cleveland Indians.

In September 1996, Riverfront Stadium was renamed "Cinergy Field" in a sponsorship deal with Greater Cincinnati energy company Cinergy. In 2001, to make room for Great American Ball Park, the seating capacity at Cinergy Field was reduced to 39,000. There was a huge wall in center field visible after the renovations, to serve as the batter's eye. The stadium was demolished by implosion on December 29, 2002.

Riverfront was a multi-purpose, circular "cookie-cutter" stadium, one of many built in the United States in the late 1960s and early 1970s as communities sought to save money by having their football and baseball teams share the same facility. Riverfront, Busch Memorial Stadium in St. Louis, Atlanta–Fulton County Stadium in Atlanta, Qualcomm Stadium in San Diego, Three Rivers Stadium in Pittsburgh, Shea Stadium in New York, Robert F. Kennedy Memorial Stadium in Washington, D.C., and Veterans Stadium in Philadelphia all opened within a few years of each other and were largely indistinguishable from one another; in particular, it was often confused with fellow Ohio River cookie-cutter Three Rivers Stadium by sportscasters because of the two stadium's similar names and similar designs.

One feature of Riverfront that was an improvement compared to some of its fellow "cookie-cutters" was the fact that the lower level field box ("blue") seats for baseball from home plate to the left field foul line were movable in an arc along curved tracks so that the field level seats on both sidelines in the football configuration were parallel to, and thus closer to, the football field than in some of the other cookie-cutter stadia.[3] The astroturf panels covering the tracks could be seen in left field during Reds games. (Shea Stadium in New York had featured a similar movable field-level seats design from its debut in 1964 until the Jets moved to Giants Stadium in New Jersey in 1984, after which the Mets retrofitted Shea for exclusive baseball use.[4] A variation of this design was also used at Three Rivers Stadium in Pittsburgh.)[5]

The site on which Riverfront Stadium sat originally included the 2nd Street tenement, birthplace and boyhood home of cowboy singer and actor Roy Rogers, who joked that he was born "somewhere between second base and center field."

Riverfront Stadium's scoreboard was designed by American Sign and Indicator, but in its last years was maintained by Trans-Lux. That scoreboard would be upgraded in the 1980s with the addition of an adjacent Sony JumboTron. 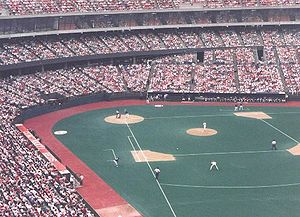 Riverfront Stadium during a Cincinnati Reds game vs. the Chicago Cubs on May 23, 1988

The Reds moved to Riverfront Stadium midway through the 1970 season, after spending over 86 years at the intersection of Findlay Street and Western Avenue – the last 57½ of those years at Crosley Field. Riverfront quickly earned a place in Cincinnati's century-long baseball tradition as the home of one of the best teams in baseball history. The Reds had only won three pennants in their final 39 years at Crosley Field (1939, 1940, 1961) but made the World Series in Riverfront's first year (1970) and a total of four times in the stadium's first seven years, with the Reds winning back-to-back championships in 1975 and 1976. The World Series would return in 1990, with Cincinnati winning the first two of a four-game sweep of the Oakland Athletics at Riverfront.

Baseball purists disliked Riverfront's artificial turf, but Reds' Manager Sparky Anderson and General Manager Bob Howsam took advantage of it by encouraging speed and line drive hitting that could produce doubles, triples and high-bouncing infield hits. Players who combined power and speed like Joe Morgan, Pete Rose and Ken Griffey, Sr. thrived there. On defense, the fast surface and virtually dirtless infield (see photo) rewarded range and quickness by both outfielders and infielders, like shortstop Dave Concepción who used the turf to bounce many of his long throws to first. Catcher Johnny Bench and first baseman Tony Pérez played here. The artificial turf covered not only the normal grass area of the ballpark but is usually the "skinned" portion of the infield. Only the pitcher's mound, the home plate area, and cutouts around first, second and third bases had dirt surfaces. This was the first stadium in the majors with this "sliding pit" configuration. The new stadiums that would follow (Veterans Stadium, Louisiana Superdome, Royals Stadium, Olympic Stadium (Montreal), Kingdome, Hubert H. Humphrey Metrodome, B.C. Place, Skydome) would install sliding pits as the original layout, and the existing artificial turf fields in San Francisco, Houston, Pittsburgh, and St. Louis would change to the cut-out configuration within the next few years.

Despite Cincinnati's love of baseball, it was the prospect of a professional football team that finally moved the city to end twenty years of discussion and build a new stadium on the downtown riverfront. After playing for two seasons at Nippert Stadium on the University of Cincinnati campus, the Bengals built on the Reds' success in the stadium's first year when they recorded their first winning season and first playoff appearance in 1970, just their third year of existence.

Perhaps the most memorable football game at Riverfront was the AFC Championship on January 10, 1982. The game became known as the Freezer Bowl and was won by the Bengals over the San Diego Chargers, 27–7. The air temperature during the game was −9 °F (−23 °C) and the wind chill was −37 °F (−38 °C), the coldest in NFL history. The win earned the Bengals their first of two trips to the Super Bowl (XVI) while playing at Riverfront.

Riverfront Stadium hosted the 1988 AFC Championship, as the Bengals beat the Buffalo Bills 21–10 to advance to their second Super Bowl appearance.

During the Bengals' tenure, they defeated every visiting franchise at least once, enjoying perfect records against the Arizona Cardinals (4-0), New York Giants (4-0), and Philadelphia Eagles (3-0). They posted a 5–1 record in playoff games played in Riverfront Stadium, with victories over the Buffalo Bills (twice), San Diego Chargers, Seattle Seahawks, and Houston Oilers. Their only home playoff loss came to the New York Jets.

For most of the Bengals' tenure at the stadium, the field contained only the basic markings required for play. Until the late 1990s, there wasn't a logo at midfield or any writing in the end zone, which had long become standard in NFL stadiums.

During the 1988 season as the Bengals were making a Super Bowl run, Riverfront Stadium was nicknamed the Jungle as the Bengals went a perfect 10-0 at home during the regular season and in the playoffs. With the new stadium nickname, the fans and team adopted the Guns N' Roses song "Welcome to the Jungle" as the unofficial theme song for the Bengals. When Paul Brown Stadium opened in 2000, the Jungle theme was incorporated into the stadium design.

When the Bengals moved to Paul Brown Stadium in 2000, the Reds were left as Cinergy Field's only tenant. Prior to the 2001 baseball season, the stadium was remodeled into a baseball-only configuration, and the artificial surface was replaced with grass. To allow room for the construction of Great American Ball Park (which was being built largely over the grounds the stadium already sat on), a large section of the left and center field stands were removed and the distance to the fences was shortened by five feet. The new Great American Ballpark and old Riverfront Stadium were 26 inches apart at its closest point during this time. Consequently, in its last years, the stadium achieved an openness and a degree of aesthetic appeal that it had lacked for most of its existence. In the Reds' final two seasons in the stadium, ongoing construction on Great American was plainly visible just beyond the outfield walls while the team played their games.

Bold indicates the winner of each game.

In addition, the Kool Jazz Festival (now the Macy's Music Festival) was an annual fixture.