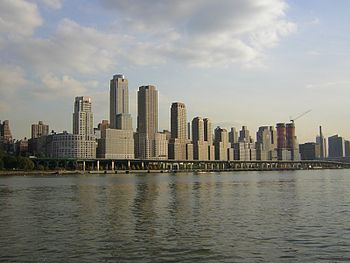 A view of the complex from the Hudson River 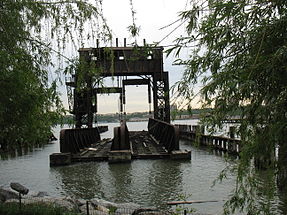 The land for the development was formerly a rail freight yard owned by the New York Central Railroad, located between 59th and 72nd streets. New York Central's rail track north of 72nd Street was covered in the 1930s in a Robert Moses project called the West Side Improvement.[1]:696–698 The project was bigger than Hoover Dam and created the Henry Hudson Parkway. It also created Riverside Park and was so skillfully done that many believe the park and road are set on a natural slope.[1]:698–700 New York Central merged with the Pennsylvania Railroad to form Penn Central in 1968 as the rail lines were suffering severe financial difficulties that would ultimately lead to the demise of both. (The rail yard was known as the Penn Yards even though Penn Central only owned it for a brief period.)

In 1962, the railroad proposed a partnership with the Amalgamated Lithographers Union to build a mixed-use development with 5,300 apartments, Litho City, on a platform over the tracks and on landfill in the Hudson River.[2] The late 1960s saw various proposals by the city's Educational Construction Fund for mixed residential and school projects, also partly on landfill.[3]

As the railroad faced bankruptcy, Donald Trump first optioned the property for $10 million in 1974. His proposal for 12,450 apartments depended on public financing, which never materialized.[4] One version had a relocated highway and pseudo park.[5] The Macri Group, an Argentine company, bought the property in partnership with developer Abe Hirschfeld in 1979, and in 1982, for the first time, a redevelopment plan was approved for the site — a 7,300,000-square-foot (680,000 m2), largely residential project named Lincoln West.[6][7] However, the development team was unable to obtain financing, and the project died.

In January 1985, Donald Trump bought the rights of the Macri Group for $95 million.[8] Trump proposed building a vast complex he called Television City, featuring headquarters for NBC along with television studios. The plan involved 15,500,000 square feet (1,440,000 m2) of residential, retail, office, and studio construction. The centerpiece of the project, designed by Helmut Jahn, was to be a 152-story tower, the 'World's Tallest Building'.[9]

At more than twice the size of the previously approved project, Television City generated fierce opposition. One year later, the project was redesigned by Alexander Cooper and downsized slightly to 14,500,000 square feet (1,350,000 m2), but that failed to satisfy the critics.[10] NBC, fearing delays, eventually decided to continue broadcasting from Rockefeller Center.[11] Trump then removed the studio space in favor of open space, added office buildings, and renamed the project Trump City.[12]

In 1989 six civic organizations proposed an alternative plan devised by Daniel Gutman, an environmental planner, and Paul Willen, an architect.[13] Known as Riverside South, the civic alternative was a largely residential project of 7,300,000 square feet (680,000 m2), the previously approved floor area, based on relocating, and partially burying the West Side Highway to make room for a 23-acre (9.3 ha) expansion of Riverside Park.[14] Hobbled by his weak financial position, Trump acquiesced and formed a partnership with his critics, formally the Riverside South Planning Corporation (RSPC).[15][16] With a master plan by Skidmore, Owings & Merrill,[17] the RSPC compromise project was approved in 1992 without the television studios and office space that Trump had substituted for some of the residential space. The final project size was 6,100,000 square feet (570,000 m2) with 1,800,000 square feet (170,000 m2) of television studios still possible on the two southern blocks.

Continuing to face pressure from his bankers, Trump was introduced to a consortium of Hong Kong investors by NYC Real Estate Broker, Susan Cara, and reached a deal with the consortium in June 1994. This joint venture finally put in motion the largest private development project in New York City history. Trump remained as the public face of the group, as he has on many other projects, but he lost control. Construction was delayed for several years as the new investors sought public financing. With improvement in the development climate, the new investors began construction in 1997. Trump ceased his active involvement in the development in 2001, but retained his 30% limited partnership.[18] 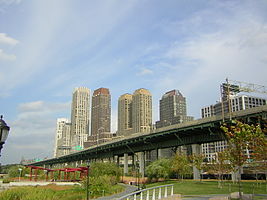 Looking north in Riverside Park South. Riverside South Buildings and the West Side Highway are in the background; park elements in the foreground.

Burying the West Side Highway

One of the key components of Riverside South is relocating the West Side Highway eastward and burying it from approximately West 70th Street to West 61st Street to facilitate a southward expansion of Riverside Park.[19]

The current viaduct from 72nd to 57th streets is the only remaining section of the West Side Elevated Highway, which once extended to the southern tip of Manhattan. A portion of the elevated highway, which was mostly built in the 1920s and 1930s, collapsed in 1973 at 14th Street. Rather than repairing the antiquated road, the state closed it and planned to replace the viaduct (up to 34th Street) with an interstate highway in new landfill, known as Westway. Fifteen years later, after the failure of the Westway proposal, the state settled on an at-grade boulevard up to 57th Street flanked by a new Hudson River Park. Despite Robert Moses' proposal to relocate the highway to grade north of 59th Street to facilitate an extension of Riverside Park,[20] the elevated section between 59th and 72nd streets remained.

The section between 59th and 72nd streets was more difficult than the rest because, while the state owned an easement, neither the state nor the city owned the land. Although the City could have acquired the land in the 1970s from the bankrupt Penn Central, the City was also near bankruptcy, and consequently preferred to keep the site in private hands to forestall demands for public expenditure.[21] 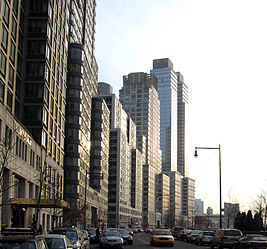 Despite City approval in 1992 of the Riverside South plan, which would create a public park with private funds, opponents claimed that any complementary public funding to bury the road would benefit only the developer and effectively waste the public funds used for the viaduct renovation, which had already begun. Opponents were further upset by the decision to close the West Side Highway northbound entrance and exit ramps at 72nd Street and fought to deny the highway project any funding, thinking that they could thereby scuttle the entire development.[22] Planning proceeded, nevertheless, albeit in fits and starts. Approved by the Federal Highway Administration in 2001,[23] the highway plan calls for relocating the elevated highway to the grade of the rail yard east of the present alignment, constructing supports for Riverside Boulevard in the form of a tunnel enclosing the highway's northbound lanes, with the park beginning above an adjacent tunnel enclosing the southbound lanes and continuing on a slope down to the waterfront. The exit ramp was subsequently closed and, in June 2006, the developer began construction of the northbound tunnel between 61st and 65th streets, raising hopes that the highway will eventually be moved.[24][25]

In 2005, the Hong Kong investors sold the project, excluding the finished codominiums, to the Carlyle Group and the Extell Development Company. Contending that the sale for $1.76 billion was little more than half what the property was worth, Trump sued his partners, but lost. Trump's name remains on some of the existing buildings.

The second phase of Riverside South was completed when the housing market improved. Overall, the project consists of 19 apartment buildings, condominiums, and lease properties. As of mid-2011[update], twelve buildings have been completed.

As with all dwellings bearing the Trump name, living units in Riverside South are likely to be positioned towards the high-end housing market. Nevertheless, 12% to 20% of the units will be affordable, as required by the City Planning Commission approval of the project.