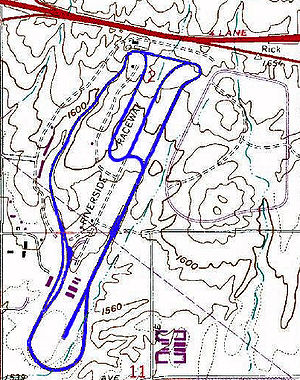 Riverside International Raceway is an example of a road course

In North America, road racing is motor racing held on a paved closed circuit with both left and right turns. Road racing is therefore distinct from both off-road racing and oval track racing; the latter is common in North America and involves turning in only one direction (usually left, counter-clockwise). Road racing may be on purpose-built race tracks (called road courses) or on temporary circuits, such as closed-off airport runways and public roads, typically street circuits. A "roval" is a road course incorporating parts of an oval track and its infield, such as is used for the 24 Hours of Daytona at Daytona International Speedway.

In British English, the term is usually used for short circuit events held at purpose-built facilities typically of one to three miles in length, often with scenic, landscaped surroundings resembling parkland. Many older facilities were based on disused former-airfields after WWII and have fallen into disrepair and been re-purposed and built-over, and, although some have endured for closed-to-club and British national events, only Silverstone, having benefitted from a massive redevelopment, is of international standard.

Some officially-sanctioned races are held on public roads (street circuits), that are closed for the duration of the event. This form of racing was banned in Great Britain in 1925 due to a spectator accident at the Kop Hill Climb, Buckinghamshire.

The 37 mile lap of the Isle of Man TT motorcycle races is probably the best known of these, together with the similar Manx Grand Prix, a 'learning stage' for the TT races, both held on the Snaefell Mountain Course, and the much-shorter Southern 100 event held on country roads in the Isle of Man.

The North West 200 and Ulster Grand Prix races are popular and well-attended in Northern Ireland. As the Isle of Man (an autonomous British Crown Protectorate) and Northern Ireland are not part of Great Britain (Northern Ireland is part of the United Kingdom), the ban does not apply. Sometimes the term "real road racing" is used to distinguish this form of racing from that which takes place on purpose-built paved circuits.

Global road-racing series such as Formula One, FIA WEC and MotoGP are almost always conducted on dedicated race tracks, such as Spa-Francorchamps, Suzuka, Monza, and Silverstone. Recent expansion of these series has resulted in dedicated tracks being built in Qatar in the Middle East, Sepang in Malaysia, and Shanghai in China. 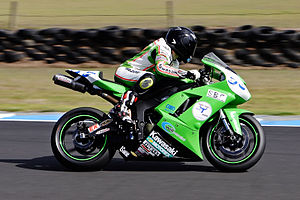 Events for many types of motorized vehicles are held at road racing tracks. Hosting a road racing tradition since 1926 at Phillip Island, Victoria, Australia, the photograph at right shows motorcycle racing at a new track, called the Phillip Island Grand Prix Circuit, which opened in 1989 with the World Motorcycle Championships.

Notable examples of temporary circuits include the Circuit de Monaco and the Guia Circuit, located on the streets of Monaco and Macau, respectively, whereas the Mille Miglia, Targa Florio, Isle of Man TT, and the Australian Formula One Grand Prix are held on public roads.

The Worlds most famous road race is the Isle of Man TT held for 2 weeks, normally the last week in May and the first week in June, when over 10,000 motorbikes and many more visitors flood the Island for the festivities.

There was a long tradition of road racing on real streets in North America. The term's definition has shifted over time, however, with the increasing dominance of Oval racing. Now the term road course often is used as a catch-all phrase for any racetrack that is not an oval, with even combined circuits (or Rovals as they are sometimes called) such as the 24-hour sports car version of Daytona being referred to as a road course. The most famous contemporary American road courses are purpose-built, but some where the original tradition evolved include: Riverside International Raceway at Riverside, California (closed since 1989), Watkins Glen International at Watkins Glen, New York, Road America at Elkhart Lake, Wisconsin, and Sonoma Raceway at Sonoma, California.

A permanent, purpose-built, road racing circuit (specifically not a street circuit), is sometimes described as a "natural" or "proper" road course in the U.S.

After a few decades of such events three sons of Barron Collier—Barron, Miles, and Samuel—founded the Automobile Racing Club of America in 1933. That organization became the Sports Car Club of America in 1944. Throughout its history, American race car drivers such as Briggs Cunningham, Lake Underwood, Carroll Shelby, and Mark Donohue were among the contestants at these road racing events.

Additionally, racing over public streets is making something of a comeback; the most famous race of this sort currently held is the Long Beach Grand Prix, hosted annually in Long Beach, California. Other famous street circuits in North America include events held in Saint Petersburg, Florida, Montreal, Québec, Vancouver, British Columbia (no longer held), and Toronto, Ontario.

Airport runways figure into several part-time road courses in North America: Burke Lakefront Airport in Cleveland, Ohio hosted a Champ Car race through 2007, the Saint Petersburg course uses the runway of Albert Whitted Airport as its main straight, and Sebring International Raceway, home of the prestigious 12-hour race in March, formerly was a military airfield in Sebring, Florida. More recently, the Edmonton Indy is held on the runways of Edmonton City Centre Airport in Edmonton, Alberta.