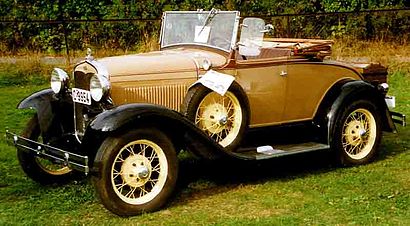 A roadster, sometimes referred to as a spider or spyder, is an open two-seat car with emphasis on sporting appearance or character. Initially an American term for a two-seat car with no weather protection, usage has spread internationally and has evolved to include two-seat convertibles.

The roadster is also a style of racing car driven in United States Auto Club (USAC) Championship Racing, including the Indianapolis 500, in the 1950s and 1960s. This type of racing car was superseded by mid-engined cars. 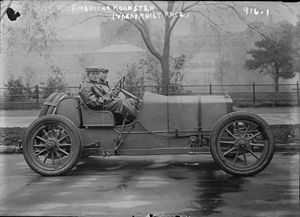 In the nineteenth century, the word "roadster" denoted a horse suitable for traveling.[1][2] By the end of the century the definition had expanded to include roadworthy bicycles and tricycles.[3]

In 1916, the Society of Automobile Engineers defined a roadster as: "an open car seating two or three. It may have additional seats on running boards or in rear deck."[4] Additional seating in the rear deck was known as a rumble seat[5] or a dickey seat.[6] The main seat for the driver and passenger was usually further back in the chassis than it would be in a touring car.[2][5] A roadster would usually have a hooded dashboard.[7]

The earliest roadster automobiles had only basic bodies without doors, a windshield, or other weather protection. By the 1920s they were appointed similarly to touring cars, with doors, a windshield, a simple folding top, and side curtains.[2] When roadsters of this era were equipped with rumble seats, the seats would fold into the body when not in use.

Roadster bodies were offered on automobiles of all sizes and classes, from mass market cars like the Ford Model T and the Austin 7 to extremely expensive cars like the Cadillac V-16, the Duesenberg Model J, and even the Bugatti Royale. They are popular with collectors, often valued over other open styles.[citation needed] 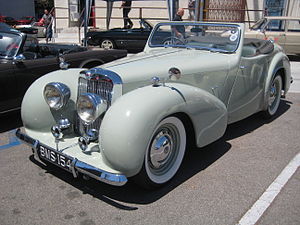 The term "roadster" as applied to automobiles is American in origin; before World War II, the British equivalent was a "two-seat tourer".[8] The term was used more widely in Britain after World War II, partly through interaction with Americans during the war and partly to make the car more appealing to Americans in the time of the "export or die" policy.[citation needed]

By the 1970s, the term "roadster" was applied to open two-seat cars of sporting appearance or character.[9][10] Roadsters had become almost as well-equipped as convertibles,[9] including side windows that retract into the doors. Roadsters of that time included the Alfa Romeo Spider, MGB, and Triumph TR4. A roadster is still defined as an open car with two seats,[11][12] with some roadsters having power tops or retractable hardtops.[13] A few manufacturers and fabricators still offer roadsters that meet the older definitions. These include Morgan, with the windowless Roadster; Caterham, with the doorless Seven; and Ariel, with the bodyless Atom. 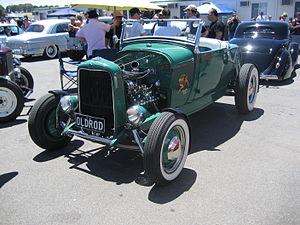 Hot rod based on a Ford Model A roadster

The American hot rod is based on pre–World War II roadsters and coupes. Late run Model Ts and 1932 Fords were the most popular starting points.

The term roadster applies to front-engined AAA/USAC Championship Cars, associated with the Indianapolis 500. The Roadster engine and drive shaft are offset from the centerline of the car. This allows the driver to sit lower in the chassis and facilitated a weight offset which is beneficial on oval tracks. 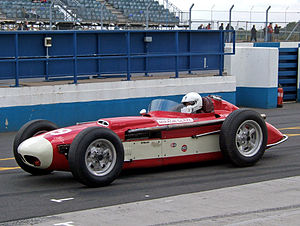 One story of why this type of racing car is referred to as a "roadster" is that a team was preparing a new car for the Indianapolis 500. They had it covered in a corner of their shop. If they were asked about their car they would try and obscure its importance by saying that it was just their (hot rod) "roadster". After the Indianapolis racer was made public, the "roadster" name was still attached to it.

Frank Kurtis built the first roadster to race the 1952 Indianapolis 500. It was driven by Bill Vukovich who led for most of the race until a steering failure eliminated him. The Howard Keck owned team with Vukovich driving went on to win the 1953 and 1954 contests with the same car. Bob Sweikert won the 1955 500 in a Kurtis after Vukovich was killed while leading. A. J. Watson, George Salih and Quinn Epperly were other notable Roadster constructors. Watson built roadsters won in 1956, 1959 - 1964 though the 1961 and 1963 winners were actually close copies built from Watson designs. The 1957 and 1958 winner was the same car built by Salih with help by Epperly built with a unique placement of the engine in a 'lay down' mounting so the cylinders were near horizontal instead of vertical as traditional design dictated. This gave a slightly lower center of gravity and a lower profile.

Roadsters had disappeared from competition by the end of the 1960s, after the introduction, and subsequent domination, of rear-engined machines. In 1965 Gordon Johncock brought the Wienberger Homes Watson to the finish in fifth place which was the last top ten roadster finish and the final time that a roadster would finish the full distance of the race. The last roadster to make the race was built and driven by Jim Hurtubise in the 1968 race and dropped out early. Hurtubise attempted to run the same car in 1969 but, while making his qualifying run at a very good speed, the engine failed on the last of the four laps. The car was entered many times after that but was never seriously considered fast enough to start.

Other classes of racing cars were built with the offset drive train and were referred to as roadsters. Some pavement midgets roadsters were built and raced into the early 1970s but never were dominant.