Robert Burrow is an English professional rugby league footballer for the Leeds Rhinos of Super League. An England and Great Britain representative hooker/scrum-half, he has spent his entire professional career to date with Leeds. At 165cm (5'5) tall and weighing less than 11 st (70 kg), Burrow is extremely small by rugby league standards, and was known for many years as "the smallest player in Super League". Despite this, he is one of the most successful players in the competition's history, having won a total of 7 Super League championships, two Challenge Cups, been named to the Super League Dream Team on three occasions and won the Harry Sunderland Trophy twice.

Burrow played for the Leeds Rhinos from the interchange bench in their 2004 Super League Grand Final victory against the Bradford Bulls. As Super League IX champions, the Rhinos faced 2004 NRL season premiers, the Bulldogs in the 2005 World Club Challenge. Burrow played from the interchange bench, scoring a try in Leeds' 39-32 victory. Burrow played for Leeds in the 2005 Challenge Cup final at scrum half back in their loss against Hull FC.[3] Later that year he played for the Leeds Rhinos at stand-off half back in their 2005 Super League Grand Final loss against Bradford Bulls.

In June 2007 he was called up to the Great Britain squad for the Test match against France.[4] He was named as Leeds Rhinos Player of the Year for his performance throughout the 2007 season, and was named in the Super League Dream Team for the same year along with team mates Scott Donald, Jamie Peacock and Gareth Ellis. Burrow was the winner of the Harry Sunderland Award for a man of the match performance in 2007's Super League XII Grand Final; in which Leeds defeated St. Helens by 33 points to 6. Burrow played a pivotal role in helping Great Britain to a 3-0 victory over New Zealand in the Gillette Fusion Test series in 2007. He was awarded the George Smith Medal as player of the series which he finished as top points scorer with 26 from two tries and nine goals.[5] 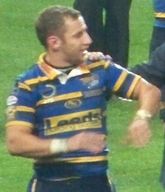 Burrow was selected for the England squad to compete in the 2008 Rugby League World Cup tournament in Australia.[8] Group A's first match against Papua New Guinea he played at scrum half back in England's victory.

Burrow played from the interchange bench for Leeds in the 2011 Challenge Cup final which was lost to Wigan.

Burrow became the first player to win the Harry Sunderland Award twice by winning the unanimous votes of all 37 judges after his impact in 2011's Super League XVI Grand Final. He was not selected for England's post-season 2011 Four Nations campaign due to a rib injury.[9]