From Infogalactic: the planetary knowledge core
Jump to: navigation, search
For other people of the same name, see Robert McGregor (disambiguation). 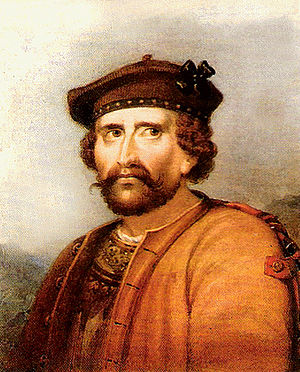 Rob Roy was born at Glengyle, at the head of Loch Katrine, as recorded in the baptismal register of Buchanan Parish. His father was Donald MacGregor and his mother Margaret Campbell. In January 1693, at Corrie Arklet farm near Inversnaid, he married Mary Helen MacGregor of Comar (1671-1745), who was born at Leny Farm, Strathyre. They had four sons: James (known as Mor or Big), Ranald, Coll and Robert (known as Robin Oig or Young Rob). They also adopted a cousin named Duncan.

Along with many Highland clansmen, at the age of eighteen Rob Roy together with his father joined the Jacobite rising led by Viscount Dundee, known as Bonnie Dundee, to support the Stuart King James II who had been deposed during the Glorious Revolution of 1688. Although victorious in initial battles, Dundee was killed in 1689, deflating the rebellion. Rob's father was taken to jail, where he was held on treason charges for two years. Rob's mother Margaret's health failed during Donald's time in prison. By the time Donald was finally released, his wife was dead. The Gregor chief never returned to his former spirit or health.

Rob Roy was badly wounded at the Battle of Glen Shiel in 1719, in which a Hanoverian British army with allied Highlanders defeated a force of Jacobite Scots supported by the Spanish. 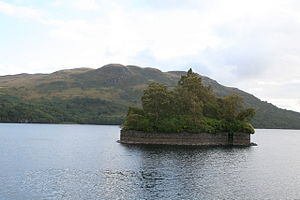 Rob Roy became a well-known and respected cattleman — this was a time when cattle rustling and selling protection against theft were commonplace means of earning a living.[1] Rob Roy borrowed a large sum to increase his own cattle herd, but owing to the disappearance of his chief herder, who was entrusted with the money to bring the cattle back, Rob Roy lost his money and cattle, and defaulted on his loan. As a result, he was branded an outlaw, and his wife and family were evicted from their house at Inversnaid, which was then burned down. After his principal creditor, James Graham, 1st Duke of Montrose seized his lands, Rob Roy waged a private blood feud against the Duke until 1722, when he was forced to surrender. Later imprisoned, he was finally pardoned in 1727. He died in his house at Inverlochlarig Beg, Balquhidder, on 28 December 1734.[2]

Another version of this series of events states that Rob Roy's estate of Craigrostan and Ardess were forfeited for his part in the rebellion of 1715. The Duke of Montrose acquired the property in 1720 by open purchase from the Commissioners of Enquiry.[3] K. Macleay, M.D., in Historical Memoirs of Rob Roy and the Clan MacGregor quotes, "...but he had taken the resolution of becoming a Roman Catholic, and he accordingly left the lonely residence we have described, and returning to Perthshire, went to a Mr Alexander Drummond, an old priest of that faith, who resided at Drummond Castle." Macleay takes the view that Rob did this out of sorrow for his crimes. In 1716 Rob Roy moved to Glen Shira for a short time and lived under the protection of John Campbell, 2nd Duke of Argyll also known as Red John of the Battles, "Iain Ruaidh nan Cath." Argyll negotiated an amnesty and protection for Rob and granted him permission to build a house in the Glen for the surrendering up of weapons. "Traditionally the story goes that Argyll only received a large cache of rusty old weapons."[4] A sporran and dirk handle which belonged to Rob Roy can still be seen at Inveraray Castle. Rob Roy only used this house occasionally for the next three or four years.

In July 1717, Rob Roy and the whole of the Clan Gregor were specifically excluded from the benefits of the Indemnity Act 1717 which had the effect of pardoning all others who took part in the Jacobite rising of 1715.[5]

Some time around 1720 and after the heat of Rob's involvement at the Battle of Glen Shiel had died down, Rob moved to Monachyle Tuarach by Loch Doine and some time before 1722 Rob finally moved to Inverlochlarig Beag on the Braes of Balquhidder. 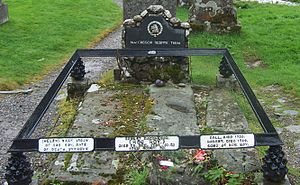 Glengyle House, on the shore of Loch Katrine, dates back to the early 18th century, with a porch dated to 1707, and is built on the site of the 17th century stone cottage where Rob Roy is said to have been born. Since the 1930s, the Category B-listed building had been in the hands of successive water authorities, but was identified as surplus to requirements and put up for auction in November 2004, despite objections from the Scottish National Party.

The Rob Roy Way, a long distance footpath from Drymen to Pitlochry, was created in 2002 and named in Rob Roy's honour.

Descendants of Rob Roy settled around McGregor, Iowa, United States, and in 1849 it was reported that the original MacGregor seal and signet was owned by Alex McGregor of Iowa. The Scots Gaelic clan seal was inscribed "S' Rioghal Mo Dhream " ("Royal is my race"). The signet was a bloodstone from Loch Lomond, and was sketched by William Williams.[6]

In 1878, the football club Kirkintilloch Rob Roy was founded and named in his memory.

The year 1723 saw the publication of a fictionalised account of his life, The Highland Rogue.[7] Rob Roy became a legend in his own lifetime, and George I was moved to issue a pardon for his crimes just as he was about to be transported to the colonies. The publication of Rob Roy, by Sir Walter Scott in 1817, further added to his fame and fleshed out his biography. Hector Berlioz was inspired by the book to compose an overture. William Wordsworth wrote a poem called "Rob Roy's Grave" during a visit to Scotland. (The 1803 tour was documented by his sister Dorothy in Recollections of a Tour Made in Scotland. The editor of the book changed the place of burial to the present location.) Adaptations of his story have also been told in film including the 1922 silent film Rob Roy, a 1953 film from Walt Disney Productions Rob Roy, the Highland Rogue and the 1995 Rob Roy directed by Michael Caton-Jones and starring Liam Neeson.

In 1894, a bartender at the Waldorf Hotel in New York City created the Rob Roy cocktail in honor of the premiere of Rob Roy, an operetta by composer Reginald De Koven and lyricist Harry B. Smith loosely based upon Robert Roy MacGregor.[8]