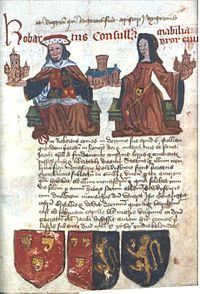 Robert Fitzroy, 1st Earl of Gloucester (before 1100 – 31 October 1147[1]) (alias Robert Rufus, Robert de Caen, Robert Consul[2][3]) was an illegitimate son of King Henry I of England. He was the half-brother of the Empress Matilda, and her chief military supporter during the civil war known as The Anarchy, in which she vied with Stephen of Blois for the throne of England.

Robert was probably the eldest of Henry's many illegitimate children.[1] He was born before his father's accession to the English throne, either during the reign of his grandfather William the Conqueror or his uncle William Rufus.[4] He is sometimes and erroneously designated as a son of Nest, daughter of Rhys ap Tewdwr, last king of Deheubarth, although his mother has been identified as a member of "the Gay or Gayt family of north Oxfordshire",[5] possibly a daughter of Rainald Gay (fl. 1086) of Hampton Gay and Northbrook Gay in Oxfordshire. Rainald had known issue Robert Gaay of Hampton (died c. 1138) and Stephen Gay of Northbrook (died after 1154). A number of Oxfordshire women feature as the mothers of Robert's siblings.[5][6]

His father had contracted him in marriage to Mabel FitzHamon, daughter and heir of Robert Fitzhamon, but the marriage was not solemnized until June 1119 at Lisieux.[1][8] His wife brought him the substantial honours of Gloucester in England and Glamorgan in Wales, and the honours of Sainte-Scholasse-sur-Sarthe and Évrecy in Normandy, as well as Creully. After the White Ship disaster late in 1120, and probably because of this marriage,[9] in 1121 or 1122 his father created him Earl of Gloucester.[10]

Robert and his wife Mabel FitzHamon had seven children:[11]

He also had four illegitimate children:

There is evidence in the contemporary source, the Gesta Stephani, that Robert was proposed by some as a candidate for the throne, but his illegitimacy ruled him out:

"Among others came Robert, Earl of Gloucester, son of King Henry, but a bastard, a man of proved talent and admirable wisdom. When he was advised, as the story went, to claim the throne on his father's death, deterred by sounder advice he by no means assented, saying it was fairer to yield it to his sister's son (the future Henry II of England), than presumptuously to arrogate it to himself."

This suggestion cannot have led to any idea that he and Stephen were rivals for the Crown, as Geoffrey of Monmouth in 1136 referred to Robert as one of the 'pillars' of the new King's rule.

The capture of King Stephen at the Battle of Lincoln on 2 February 1141 gave the Empress Matilda the upper hand in her battle for the throne, but by alienating the citizens of London she failed to be crowned Queen. Her forces were defeated at the Rout of Winchester on 14 September 1141, and Robert of Gloucester was captured nearby at Stockbridge.

The two prisoners, King Stephen and Robert of Gloucester, were then exchanged, but by freeing Stephen, the Empress Matilda had given up her best chance of becoming queen. She later returned to France, where she died in 1167, though her son succeeded Stephen as King Henry II in 1154.

Robert of Gloucester died in 1147 at Bristol Castle, where he had previously imprisoned King Stephen, and was buried at St James' Priory, Bristol, which he had founded.

Robert of Gloucester is a figure in many of the novels by Ellis Peters in the Cadfael Chronicles. The series of twenty novels is set in the years of the competition between King Stephen and Empress Maud, also called the Anarchy. He is seen in the novels as a strong moderating force to his half-sister, and crucial to building support for her in England to begin her quest for the crown in earnest (see Saint Peter's Fair). His efforts to gain the crown for his sister by capturing King Stephen and her own actions in London are part of the plot in The Pilgrim of Hate. His capture by Stephen's wife Queen Mathilda is in the background of the plot of An Excellent Mystery. The exchange of the imprisoned Robert for the imprisoned Stephen is in the background of the plot of The Raven in the Foregate. Robert's travels to persuade his brother-in-law to aid his wife Empress Maud militarily in England is in the background of the novel The Rose Rent. His return to England when Empress Maud is trapped in Oxford Castle figures in The Hermit of Eyton Forest. Robert's return to England with his young nephew Henry, years later the king succeeding Stephen, is in the background of the plot of The Confession of Brother Haluin, as the battles begin anew with Robert's military guidance. Robert's success in the Battle of Wilton (1143) leads to the death of a fictional character, part of the plot of The Potter's Field. In the last novel, he is a father who can disagree with then forgive his son Philip (see the last novel, Brother Cadfael's Penance). In that last novel, Brother Cadfael, the Welsh monk who fought under English lords and ends his life in a Benedictine monastery in England, speculates on the possibly different path for England if the first son of old King Henry, the illegitimate Robert of Gloucester, had been recognised and accepted. In Wales of that era, a son was not illegitimate if recognized by his father, and to many in the novels, Robert of Gloucester seemed the best of the contenders to succeed his father. Instead, he used his strength to fight for his half-sister.