Gardner was born in Hinsdale, Illinois. He spent most of his life in the Chicago area. He attended Phillips Academy in Andover, Massachusetts. He graduated from Yale University in 1912, where he was a member of Skull and Bones.[1]

While a sophomore at Yale, Gardner won the 1909 U.S. Amateur golf tournament over Chandler Egan at the Chicago Golf Club. He was the youngest winner, at 19 years, 5 months, of the U.S. Amateur.[2] His record stood for 85 years until Tiger Woods won his first of three Amateurs at age 18 years, 8 months.

Golf was not the only sport Gardner excelled at. On June 1, 1912, at an intercollegiate track and field competition in Philadelphia, he set the world pole vault record at 13 feet 1 inch (3.99 m).[6] This record would be short lived as Marc Wright vaulted 13 feet 2 1⁄4 inches (4.020 m) one week later at the Olympic trials in Cambridge, Massachusetts.[7]

Gardner also was national champion in another sport, racquets. He and Howard Linn won the national doubles racquets championship in 1926 and 1929.

Gardner enlisted in the Army in 1917 and served in France during World War I as a lieutenant in a field artillery unit. After the war he returned to Chicago and joined a stock brokerage firm where he spent the rest of his career. He served as president of the Chicago District Golf Association (CDGA) for many years and also served on several United States Golf Association committees. He won the CDGA Amateur Championship three times (1916, 1924, 1925).[8]

Gardner died in Lake Forest, Illinois at the age of 66. 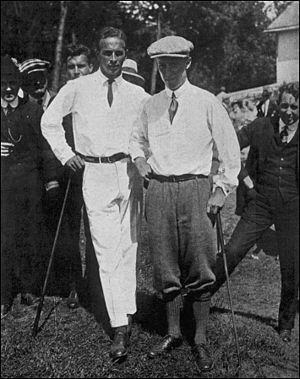 Gardner (left) during the 1916 U.S. Amateur. To the right is Chick Evans, who beat Gardner in the final match.