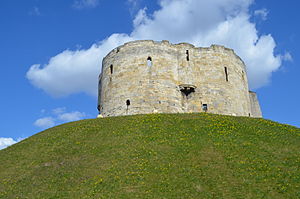 Cliffords Tower, the scene of Aske's execution in 1537

Robert Aske (1500–1537) was an English lawyer, became a leader of rebellion in Yorkshire. He led the Pilgrimage of Grace protest in 1536; King Henry VIII of England had him executed for treason on 12 July 1537. 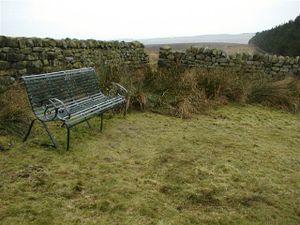 Aske was the younger son of Sir Robert Aske of Aughton near Selby, a scion of an old Yorkshire family. The family was well connected: one of Aske's cousins was Henry Clifford, the 2nd Earl of Cumberland, his first cousin once removed, for his mother Elizabeth Clifford was the daughter of John Clifford, 9th Baron de Clifford, and Margaret Bromflete; Queen Jane Seymour was also his third cousin through the same line.

Aske became a lawyer, and was a Fellow at Gray's Inn. A devout man, he objected to Henry's religious reforms, particularly the Dissolution of the Monasteries. When rebellion broke out in York against Henry VIII, Aske was returning to Yorkshire from London. Not initially involved in the rebellion, he took up the cause of the locals and headed the Pilgrimage of Grace. By 10 October 1536 he had come to be regarded as their "chief captain". Most of Yorkshire, and parts of Northumberland, Durham, Cumberland and Westmorland were in revolt.

On 13 November 1536, Aske treated with the royal delegates, including the Duke of Norfolk, and received an assurance of an audience and safe passage to the king. Among the insurgents' requests was the punishment of heretical bishops and of the king's evil advisers, the recall of his anti-ecclesiastical legislation, the prosecution of his "visitors", Lee and Layton, and the holding of a parliament in the North. [1] He travelled to London, met Henry VIII, and received promises of redress and safe passage.

As he began his journey back north, fighting broke out again. This renewed fighting allowed Henry to change his mind, and he had Robert Aske seized and brought to the Tower of London. He was convicted of high treason in Westminster and was taken back to York, where he was hanged in chains on 12 July 1537,[1] on a special scaffold erected outside Clifford's Tower.

Aske shares his name with, and is likely to be a member of the same Yorkshire family as, another Robert Aske, a wealthy haberdasher in the City of London who is most famous for leaving the bulk of his estate to create the charity which founded a number of schools. The village and parish of Askham Bryan was partly named after him[speculation?][citation needed]

Aske was played by Sean Bean in the 2003 television serial Henry VIII, in which he is inaccurately portrayed as a violent former lieutenant of Henry's army.

Aske is also portrayed by Gerard McSorley in the third season of Showtime's The Tudors. At the time of filming, McSorley was twenty years older than Aske was when he died. The series also shows Aske with a young family, while, in fact, he was not married.