From Infogalactic: the planetary knowledge core
Jump to: navigation, search
This article is about the American songwriter and screenwriter. For other people named Robert Sherman, see Robert Sherman (disambiguation).

Robert Bernard Sherman (December 19, 1925 – March 6, 2012)[1] was an American songwriter who specialized in musical films with his brother Richard Morton Sherman. According to the official Walt Disney Company website, "[the Sherman Brothers were] responsible for more motion picture musical song scores than any other songwriting team in film history."[2] Some of the Sherman Brothers' best known songs were incorporated into live action and animation musical films including: Mary Poppins, The Jungle Book, The Many Adventures of Winnie the Pooh, Chitty Chitty Bang Bang, The Slipper and the Rose, Charlotte's Web. Their most well known work however remains the theme park song "It's a Small World (After All)". According to Time.com, this song is the most performed song of all time.[3]

Robert Bernard Sherman was born on December 19, 1925, in New York City, to Russian Jewish immigrants, Rosa (Dancis) and Al Sherman.[4] Al Sherman, a songwriter, paid for Robert's hospital delivery costs with a royalty check that had arrived that day for the song "Save Your Sorrow". His brother and later songwriting partner, Richard, was born in 1928. Sherman's father later became a well known Tin Pan Alley songwriter.[5]

As a youth, Robert Sherman excelled in intellectual pursuits, taking up the violin and piano, painting and writing poetry. Following seven years of frequent cross-country moves, the Shermans finally settled down in Beverly Hills, California. Some of the primary schools Robert attended in Manhattan included PS 241 and the Ethical Culture Fieldston School; in California, the El Rodeo School.[6]

Throughout his years at Beverly Hills High School, he wrote and produced radio and stage programs for which he won much acclaim. At age 16, he wrote Armistice and Dedication Day, a stage play centered on contemporary 1940s Americans that showed how their lives were inextricably changed following the December 7, 1941, attack on Pearl Harbor. The play yielded thousands of dollars for War Bonds and earned a special citation from the War Department.[7][8]

For being wounded during battle, Sherman was awarded the Purple Heart medal. Other medals received by Sherman for service to his country were the Combat Infantryman Badge, two Battle Stars for his European-African-Middle Eastern Campaign Medal, an American Campaign Medal, a World War II Victory Medal, and a Good Conduct Medal. In addition, Sherman was also awarded several Army Weapons Qualifications badges including a "Sharpshooter badge" with bars for both rifle and submachine gun; a "Marksman Badge" for carbine and an "Expert Badge" for rifle and grenade.[10]

While recuperating from his knee injury in Taunton and Bournemouth in England, Sherman first became curious about British culture, reading anything he could find on the subject. Once back on his feet, Sherman met and became friends with many British citizens, attaining first-hand knowledge of the United Kingdom, its customs and people.[11]

Years later, Sherman credited this time in his life as the origin of his fascination with England, believing that it proved an invaluable resource to his songwriting career. Many of his best-known works center around English stories, authors and subject matter.

On his return to the United States, Sherman attended Bard College in upstate New York where he majored in English Literature and painting. Sherman also served as the editor-in-chief of The Bardian which is the campus newspaper. At Bard, Sherman completed his first two novels, The Best Estate and Music, Candy and Painted Eggs. He graduated in the class of 1949.[14] On May 12, 1990, Sherman received an Honorary Doctorate from Lincoln College.[15]

Within two years, Sherman and his brother Richard began writing songs together on a challenge from their father, Al Sherman, a successful popular songwriter in the "Tin Pan Alley" days ("No! No! A Thousand Times No!!", "You Gotta Be a Football Hero").[16]

In 1958, Sherman founded the music publishing company, Music World Corporation, which later worked with Disney's BMI publishing arm, Wonderland Music Company.[17] That same year, the Sherman Brothers had their first Top Ten hit with "Tall Paul", which was sung by Annette Funicello. The success of this song yielded the attention of Walt Disney who eventually hired the Sherman Brothers as Staff Songwriters for Walt Disney Studios.[18] While at Disney, the Sherman Brothers wrote what is perhaps their most recognized song: "It's a Small World (After All)" for the 1964 New York World's Fair.

Robert and Richard Sherman worked directly for Walt Disney until Disney's death in 1966. After leaving the company, the brothers worked freelance as songwriters on scores of motion pictures, television shows, theme park exhibits and stage musicals.

Their first non-Disney assignment came with Albert R. Broccoli's motion picture production Chitty Chitty Bang Bang in 1968 which garnered the brothers their third Academy Award Nomination. In 1973, the Sherman Brothers made history by becoming the only Americans ever to win First Prize at the Moscow Film Festival for Tom Sawyer for which they also authored the screenplay.[21]

The Slipper and the Rose was picked to be the Royal Command Performance of the year and was attended by Queen Elizabeth. A modern musical adaptation of the classic Cinderella story, Slipper also features both song-score and screenplay by the Sherman Brothers. That same year the Sherman Brothers received their star on the Hollywood "Walk of Fame" directly across from Grauman's Chinese Theater.[22]

Outside the motion picture realm, their Tony-nominated Over Here! (1974)[23] was the biggest-grossing original Broadway Musical of that year. The Sherman Brothers have also written numerous top selling songs including "You're Sixteen", which holds the distinction of reaching Billboard's Top Ten twice; first with Johnny Burnette in 1960 and then with Ringo Starr fourteen years later.[24] Other top-ten hits include, "Pineapple Princess", "Let's Get Together" and more. 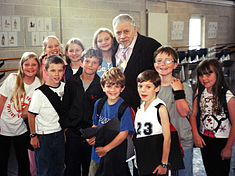 In 2000, the Sherman Brothers wrote the song score for Disney's blockbuster film: The Tigger Movie (2000). This film marked the brothers' first major motion picture for the Disney company in over twenty eight years.[25]

In 2002 the stage musical Chitty Chitty Bang Bang premiered in London. It was the most successful stage show ever produced at the London Palladium, boasting the longest run in that century-old theatre's history. In early 2005 a second Chitty company premiered on Broadway (New York City) at the Foxwoods Theatre (then the Hilton Theatre). The Sherman Brothers wrote an additional six songs specifically for the new stage productions.[26]

A new Disney and Cameron Mackintosh production of Mary Poppins: The Stage Musical made its world premiere at the Prince Edward Theatre in December 2004 and features the Sherman Brothers classic songs.[28]

In June 2005, Robert B. Sherman was inducted into the Songwriters Hall of Fame with his brother. Also in June 2005, a tribute was paid to Robert B. Sherman at the Théâtre de Vevey in Vevey, Switzerland by the Ballet Romand.[29] Chitty opened on Broadway in 2005 and commenced its first full UK tour in December 2005 with subsequent tours and/or tour dates in each year since. Mary Poppins opened on Broadway in 2006.[30]

In 2008 Mary Poppins embarked on a UK tour as well as a world tour beginning in Göteborg, Sweden. Chitty embarked on a tour of 29 cities in the U.S. which ended in 2009.

Sherman married Joyce Ruth Sasner in 1953. Their marriage moderated what had become Sherman's bohemian lifestyle in the years following the war. Their first child, Laurie, was born in 1955, followed by Jeffrey in 1957, Andrea in 1960 and later, Robert in 1968. The Shermans would have five grandchildren.[31]

In 2002, Sherman moved from Beverly Hills to London, England; his brother, Richard, remained in California. The geographical separation, however, did not impede their collaborative process. They credited this to the availability of technology in the way fax machines, email and low-cost international telephone service. Also, both brothers travelled between Los Angeles, New York and London frequently which also facilitated their work. After Sherman's relocation, he and his brother continued to collaborate on various musical plays as well as a feature, animated, film musical which incorporates their original story, song score and screenplay.

Robert Sherman died in London on March 6, 2012 from an age-related illness at the age of 86.[1] His wife Joyce Sherman, preceded him in death by eleven years in 2001. A public memorial service and funeral was held for Sherman on March 9, 2012 at Hillside Memorial Park and Mortuary in Culver City.[32]

Painting and other artistry 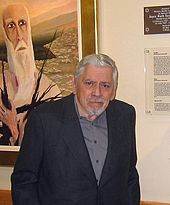 Sherman dedicating a print of his painting, "Sacrifice" (Behind) to the Western Marble Arch Synagogue in London in 2004. Officiating was Dr. Jonathan Sacks, Chief Rabbi of the British Empire and Commonwealth.

A lesser known aspect of Sherman's life was his painting which he had done since 1941 and kept private (except from his family and close friends)[33] until 2002. Sherman studied painting while attending Bard College, receiving a double degree in both Painting and English Literature. Sherman has worked in various visual arts media, including clay and metal sculpture, but his main focus was oil painting throughout the 1940s, 1950s and 1960s until he switched to acrylics in the mid-1960s, and stuck to that medium.

In April 2002, an exhibition of Sherman's paintings was held in London, England, at Thompsons' Gallery on Marylebone High Street. This marked the first public exhibition of his paintings since he started painting in 1941. Sherman subsequently exhibited his paintings in Florida and California. A series of Limited Edition Giclées of Sherman's art were also published at this time on both canvas and paper.

In addition to being a painter, Sherman was also a metal sculptor, poet, and short story author. 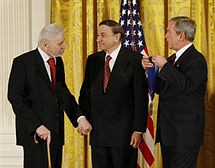 The Sherman Brothers receive the National Medal of Arts at The White House on November 17, 2008 (left to right: Robert B. Sherman, Richard M. Sherman and U.S. President George W. Bush)

In 2005, Robert Sherman established an annual scholarship award in his name through the BMI Foundation.[48] The awardee is chosen by BMI's Lehman Engel program with some consultation with Sherman. The first awardee was announced in November 2006. Awardees are chosen for their excellence in musical comedy songwriting with an emphasis on lyric writing.[48] Following is a list of the annual winners since the award's inception:

In 2013, Moose: Chapters From My Life, Sherman's autobiography, was edited by his son Robert J. Sherman and was published by AuthorHouse Publishers. The book was acknowledged in the credits of the film Saving Mr. Banks[51] which also features actors playing the Sherman Brothers. B. J. Novak portrayed Robert Sherman in the film.[52]

Marking the official UK book launch for Moose, Robert J. Sherman wrote and emceed a two night cabaret called A Spoonful of Sherman which premiered at the St. James Theatre in London, England on January 6, 2014.[53] The show was billed as "A Celebration of the Life, Times and Songs of Robert B. Sherman" and was received extremely well by the crowd and the critics alike.[54][55] The show took on a life of its own, subsequently enjoying a "sold out" return engagement later in the year at the same venue. The Original Cast Recording, double CD was produced by Nicholas Lloyd Webber and released by SimG Records in 2015.[56][57] A UK tour is also purportedly in the works for 2016.[58]

The London Palladium in 2004