From Infogalactic: the planetary knowledge core
Jump to: navigation, search
For other uses, see Bosch.

pronunciation (help·info)), or Bosch, is a German multinational engineering and electronics company headquartered in Gerlingen, near Stuttgart, Germany. It is the world's largest supplier of automotive components measured by 2011 revenues.[3] The company was founded by Robert Bosch in Stuttgart in 1886.[4] Bosch is 92% owned by Robert Bosch Stiftung.[1]

The history of the company started in a backyard in Stuttgart-West as the Werkstätte für Feinmechanik und Elektrotechnik on November 15, 1886. One year later, Bosch presented the first low voltage magneto for gas motors. Twenty years later, the first magneto for automobiles followed.

The first factory was opened by Bosch in Stuttgart in 1901. In 1906, the company produced its 100,000-th magneto. In the same year, Bosch introduced the 8-hours day for workers. In 1910, the Feuerbach plant was founded and built close to Stuttgart. In this factory, Bosch started to produce headlights in 1913.

In 1917, Bosch was transformed into a corporation.

In 1926, Bosch started to produce windscreen wipers, and in 1927, injection pumps for diesel. Bosch bought the gas appliances production from Junkers & Co. in 1932. In the same year, the company developed its first power drill and presented its first car radio.

In 1937, Bosch was transformed into a limited liability company.

Bosch's subsidiary, Dreilinden Maschinenbau GmbH (DLMG) was an arms manufacturer in Kleinmachnow. This subsidiary employed forced laborers, prisoners of war and concentration camp detainees. There are two books published by Angela Martin and Hanna Sjöberg that report about Bosch's use of slave labor. Since 2006, there is a commemoration in the former forced labor camp.

After the second world war, Bosch established a partnership with the Japanese company Denso.

In 1964, the Robert Bosch Stiftung was founded. Bosch founded a new development center in Schwieberdingen in 1968, and headquarters moved to Gerlingen in 1970.

In 1981, the company participated on an equity basis in the Telefonbau & Normalzeit GmbH that was renamed Telenorma in 1985, and acquired completely in 1987. In 1994, this part of the company was renamed as Bosch Telecom GmbH.

In 2001, Bosch acquired the Mannesmann Rexroth AG which was later renamed to Bosch Rexroth AG. In the same year, the company opened a new testing center in Vaitoudden close to Arjeplog in north Sweden. A new developing center in Abstatt, Germany, followed in 2004.

Important inventions in these years were the electric hydraulic brake in 2001, the common rail fuel injection with piezo-injectors, the digital car radio with a disc drive, and the cordless screwdriver with a lithium-ion battery in 2003.

Bosch received the Deutsche Zukunftspreis (German Future Prize) from the German president in 2005 and 2008. A new development center was planned in 2008 in Renningen. In 2014, the first departments moved to the new center, while the remaining departments followed in 2015.

In 2009, Bosch invested about 3.6 billion Euro in development and research. Approximately 3900 patents are published per year. In addition to increasing energy efficiency by employing renewable energies, the company plans to invest into new areas such as biomedical engineering.

China has developed into an important market and manufacturing base for Bosch. In 2012, Bosch had 34,000 employees and a revenue of 41.7 billion Yuan (about 5 billion Euro) in China.

Bosch comprises more than 350 subsidiary companies. In addition to automotive components, which generate around 60% of its revenues, Bosch produces industrial machinery and hand tools.[9] 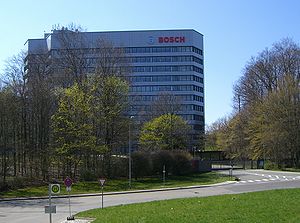 Although most of the company's plants and employees are located in Germany (112,300 employees), Bosch is a worldwide company.[4]

In May 2015, Bosch Security Systems opened its newly constructed distribution center in Greer, South Carolina. The distribution center adds more than 50 new associates in the state and will receive, store and ship more than 50,000 different products for video surveillance, intrusion and fire detection, access control and management systems and professional audio and conference systems.[13]

There are other wholly owned Bosch subsidiaries in:

and other countries. Bosch employs over 290,183 people in more than 50 countries, supplying a complex distribution network of new products and parts.[16]

Bosch entered India in 1922, when Illies & Company set up a sales office in Calcutta. For three decades, the company operated in the Indian market only through imports. In 1951, Bosch set up its first manufacturing plant in India.[17]

Currently, Bosch India has a turnover of over $2 billion and over 26000 employees spread across 10 locations and 7 application development centers. 84% of Bosch India revenues come from its automotive business, with the remaining 16% split between its non-automotive businesses that include packaging, energy and building solutions, power tools and consumer retail.[18] Bosch also has an R&D facility in Bangalore, India. This is Bosch's largest R&D facility outside its home market of Germany.[19] In September 2014, Bosch announced the launch of a locally developed eye-care solution in India. The company’s new eye screening and detection system offers a combination of hardware and software and provides affordable eye care.

Bosch India is listed on the Indian stock exchanges and has a market capitalization of over $12 billion.[20] 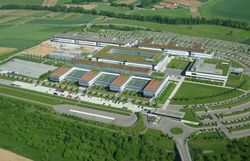 The Bosch R&D center in Abstatt, Germany, which is a major site for the development of automotive components.

About 60% of Bosch's worldwide annual sales are produced in automotive technology. Bosch invented the first practical magneto, an early ignition electrical source, which provided the spark to ignite the fuel in most of the earliest internal combustion engines, and is still used in general aviation engines. Bosch's corporate logo to this date depicts the armature from a magneto. Bosch was an early manufacturer of Anti-lock Braking System (ABS), and as time passed, Bosch became a leader in such specialized fields as traction control systems (TCS), the Electronic Stability Program (ESP), body electronics (such as central locking, doors, windows and seats), and oxygen sensors, injectors and fuel pumps. Even in such humble technological areas as spark plugs, wiper blades, engine cooling fans and other aftermarket parts, Bosch has over $1 billion in annual sales.

Bosch is a leading player in car stereo systems and in-car navigation systems.

Bosch's subsidiary Bosch Rexroth is a supplier of industrial technology, producing hydraulic, electric, and pneumatic machinery for driving, controlling, and moving machines in applications ranging from automotive to mining.[4] 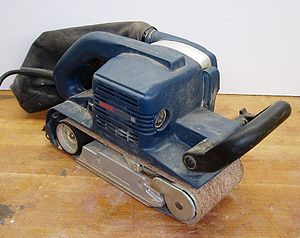 Bosch caters to the areas of consumer goods and building technology with its power tool, thermotechnology, and security systems, as well as with its household appliances business within the BSH Bosch and Siemens Hausgeräte GmbH joint venture. In the US, power tools are provided by the Robert Bosch Tool Corporation based in Mt. Prospect, Illinois.[22]

With its brands Bosch, Hawera, Skil, Dremel, RotoZip, Freud, Vermont American, and many more, Bosch is one of the largest manufacturers of portable power tools worldwide. Bosch manufactures power tools for the building trade, industry, and do-it-yourselfers (DIY-ers). In or around 1956, Dr. Hans Erich Slany worked with Bosch to design one of the first plastic power tools. Prior to this time, power tools were metal castings that often conducted electrical sparks or current into the user as well as being very heavy. Today the power tools designed by TEAMS Design have been winning awards worldwide for many years.[23] In 2011, the 12" Dual-Bevel Glide Miter Saw won an EID Silver Award.[24] In 2012, the Dremel Saw Max was awarded a Good Design Award[25] and was chosen as an IDEA Award finalist.[26] The product range also includes accessories such as drill bits and saw blades, under its Vermont American brand, as well as gardening and water gardening products under its Gilmour, LR Nelson, and Sunterra brands.[27] 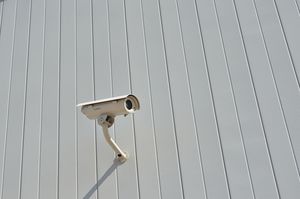 A CCTV camera manufactured by Bosch.

In 2002, Bosch acquired Philips Communications and Security, Inc., adding a video surveillance portfolio, as well as sales channels, to its business.[30]

BSH Bosch und Siemens Hausgeräte GmbH, in which Bosch acquired all shares in 2014, is one of the world's top three companies in the household appliances industry. In Germany and Western Europe, BSH is the market leader. Its portfolio includes the principal brand names Bosch and Siemens, Gaggenau, Neff, Thermador, Constructa, Viva, and ufesa brands, and further six regional brands. Bosch household appliances for the North American market are mainly manufactured at its factory near New Bern, North Carolina. The distribution of manufacturing workforce in household appliances is:

Bosch owned 50% of Purolator Filters in a joint venture with Mann+Hummel until 2013. In 2013 the Mann+Hummel Group has taken over the remaining 50% stake from Bosch.

Bosch owned 50% of the home appliance manufacturer Bosch-Siemens Hausgeräte until it acquired the other half from Siemens AG in 2015 and renamed it to BSH Hausgeräte GmbH.[4] The vehicle audio equipment company Blaupunkt was a subsidiary of Bosch until March 2009.[4]

In June 2008 Bosch formed SB LiMotive, a 50:50 joint company with Samsung SDI. The company held ground breaking ceremony for a 28.000 m2 lithium-ion battery cell manufacturing plant in September 2009 and it is scheduled to start production for hybrid vehicles in 2011 and for electric vehicles in 2012. The plant will generate a 1.000 jobs in Ulsan, Korea in addition to the 500 employees in Korea, Germany and the USA. SB LiMotive was officially ended in September 2012 with both companies focusing on automotive batteries alone.

Robert Bosch GmbH, including its wholly owned subsidiaries such as Robert Bosch LLC in North America, is unusual in that it is an extremely large, privately owned corporation that is almost entirely (92%) owned by a charitable foundation. Thus, while most of the profits are invested back into the corporation to build for the future and sustain growth, nearly all of the profits distributed to shareholders are devoted to humanitarian causes. 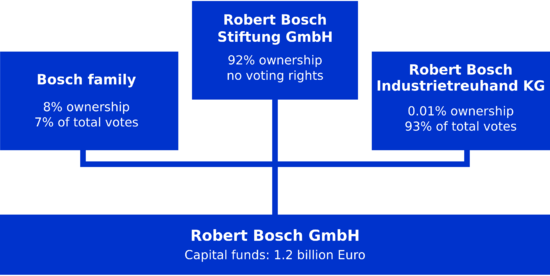 For example, in 2004, the net profit was US$2.1 billion, but only US$78 million was distributed as dividends to shareholders. Of that figure, US$72 million was distributed to the charitable foundation, and the other US$6 million to Bosch family stockholders. The remaining 96% of the profits were invested back into the company. In its core automotive technology business, Bosch invests 9% of its revenue on research and development, nearly double the industry average of 4.7%.[36]

Almost all Bosch locations are both ISO 9001 certified (quality) and ISO 14001 certified (environmental protection).[37] In addition to that, their management is compliant with OHSAS 18001.