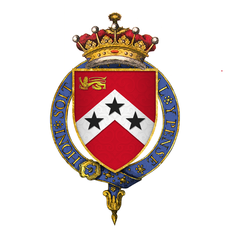 Robert Kerr was born in Wrington, Somerset, England, the younger son of Sir Thomas Kerr (Carr) of Ferniehurst, Scotland, by his second wife, Janet, sister of Walter Scott of Buccleuch.[1] About the year 1601, while an obscure page to George Home, 1st Earl of Dunbar, he met Sir Thomas Overbury in Edinburgh. The two became friends and travelled to London together. Overbury soon became secretary to Carr. When the latter embarked on his career at court, Overbury took the position of mentor, secretary and political advisor to his more charismatic friend, becoming the brains behind Carr's steady rise to prominence. 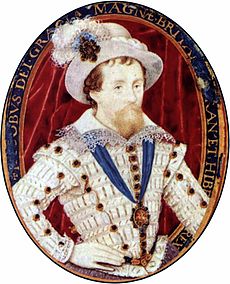 Portrait of James by Nicholas Hilliard, from the period 1603–09

In 1607, Carr happened to break his leg at a tilting match, at which King James VI and I was in attendance. According to Thomas Howard, 1st Earl of Suffolk, the king instantly fell in love with the young man, even helping nurse him back to health, all the while teaching him Latin.[2] The king subsequently knighted the young Carr and took him into favour. Sir Walter Raleigh had, through his attainder, forfeited his life-interest in the manor of Sherborne, even though he had previously executed a conveyance by which the property was to pass on his death to his eldest son (a conveyance which helped to codify many aspects of the United Kingdom's use of primogeniture, still in practice even today). Unfortunately for Raleigh, this document was rendered worthless by a flaw that gave the king eventual possession of the property. Acting on his Secretary of State, the Earl of Salisbury’s suggestion, James conferred the manor to Carr. The case was argued at law, and in 1609 judgment was given for the Crown. Apparently Lady Raleigh received some inadequate compensation, and Carr at once entered on possession. Carr's influence became such that in 1610 he was instrumental in persuading the king to dissolve Parliament, which had shown signs of attacking the king's Scottish favourites.[citation needed] On 24 March, 1611 he was bestowed Viscount Rochester, and subsequently a Privy Councillor.[3] 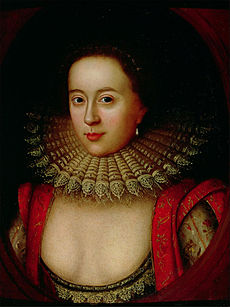 When Salisbury died in 1612, James had the notion of governing in person as his own chief Minister of State, with Carr carrying out many of Salisbury's former duties. But James's inability to attend closely to official business exposed the government to factionalism.[4] The Howard party, consisting of Henry Howard, 1st Earl of Northampton; Thomas Howard, 1st Earl of Suffolk; his son-in-law William Knollys, 1st Earl of Banbury; Charles Howard, 1st Earl of Nottingham, and Sir Thomas Lake, soon took control of much of the government and its patronage. Even the powerful Carr, hardly experienced for the responsibilities thrust upon him and often dependent on his intimate friend Overbury for assistance with government papers,[5] fell into the Howard camp. He had done this after beginning an affair with Frances Howard, Lady Essex, daughter of the Earl of Suffolk.

Overbury mistrusted the Howards and still had Carr's ear, and tried to prevent the marriage. In order to remove him from court, the Howard faction manipulated Overbury into seeming to be disrespectful to the queen. They then persuaded the king to offer Overbury an assignment as ambassador to the court of Michael of Russia, aware that his refusal would be tantamount to treason. The plan worked and Overbury declined, wishing to remain in England and at his friend's side. On 22 April 1613 Overbury was placed in the Tower of London at the king's "request",[6] eventually dying there five months later on 15 September "of natural causes".

On 25 September 1613, and supported by the king, Essex obtained a decree of nullity of marriage against her husband, Robert Devereux, 3rd Earl of Essex. On 3 November 1613 Carr was advanced to the Earldom of Somerset, on 23 December appointed Treasurer of Scotland. On 26 December, Lady Essex married Carr.

As the years progressed James showered Carr with more gifts, until 1615 when the two men had a falling out and Carr was replaced by George Villiers, 1st Duke of Buckingham. James wrote a letter that year detailing a list of complaints he then had against Carr. Carr still retained some favour, and might possibly have remained in power for some time longer but for the discovery in July of the murder of Overbury by poisoning.[7] At the infamous trial Sir Edward Coke and Sir Francis Bacon were set to unravel the plot. After four of the principal agents had been convicted and hanged at Tyburn, Carr and Howard were brought to trial. The latter confessed, and of her guilt there can be no doubt. Carr’s share is far more difficult to uncover, and probably will never be fully known. The evidence against him rested on mere presumption, and he consistently declared himself innocent. Probabilities are on the whole in favour of the hypothesis that he was no more than an accessory after the fact. Fearing Carr might seek to implicate him, James repeatedly sent messages to the Tower pleading with him to admit his guilt in return for a pardon stating, "It is easy to be seen that he would threaten me with laying an aspersion upon me of being, in some sort, accessory to his crime". The king eventually let matters take their course, and both Carr and Howard were found guilty and confined to the Tower. The sentence, however, was not carried into effect against either culprit. Howard was pardoned immediately, but both remained in the Tower until 1622.[3] Carr appears to have refused to buy forgiveness by concessions, and did not obtain his pardon until 1624. He emerged into public view only once more when, in 1630, he was prosecuted in the Star Chamber for communicating a paper recommending the establishment of arbitrary government by Robert Dudley to the Earl of Clare.

Carr died in July 1645, leaving one daughter, Anne, the sole issue of his ill-fated marriage, afterwards wife of the 1st Duke of Bedford.