He was the younger son of William Cecil, 1st Baron Burghley by his second wife Mildred Cooke. His elder half-brother was Thomas Cecil, 1st Earl of Exeter, and the philosopher Francis Bacon was his first cousin.

Robert was small and hunchbacked, in an age which attached much importance to physical beauty in both sexes, and he endured much ridicule as a result : Queen Elizabeth called him "my pygmy", and King James I "my little beagle". Nonetheless his father recognised that it was Robert rather than Thomas who had inherited his own political genius. While Burghley was fond of both his sons, he is said to have remarked that Robert could rule England, but Thomas could hardly rule a tennis court.

Cecil attended St John's College, Cambridge in the 1580s, but did not take a degree.[1][2] He also attended "disputations" at the Sorbonne.[3] In 1584 he sat for the first time in the House of Commons, representing his birthplace, the borough of Westminster. In 1589 Cecil married Elizabeth Brooke, the daughter of William Brooke, 10th Baron Cobham, and his second wife, Frances Newton. Their son, William Cecil was born in Westminster on 28 March 1591 and baptised in St Clement Danes on 11 April. Elizabeth died when their son was six years old.[4] They also had one daughter, Frances (1593–1644), who married Henry Clifford, 5th Earl of Cumberland.

He fell into dispute with Robert Devereux, 2nd Earl of Essex, and only prevailed at Court upon the latter's poor campaign against the Irish rebels during the Nine Years War in 1599. He was then in a position to orchestrate the smooth succession of King James, maintaining a secret correspondence. Essex's unsuccessful rebellion in 1601, which resulted in his final downfall and death, was largely aimed at Cecil, who was to be removed from power and impeached. Whether Essex intended that Cecil should actually die is unclear.

It is to Cecil's credit that he persuaded the Queen to treat the rebels with a degree of mercy which was unusual in that age. Essex himself and four of his closest allies were executed, but the great majority of his followers were spared: even Essex's denunciation of his sister Penelope, Lady Rich as the ringleader of the rebellion was tactfully ignored. This clemency did him no good in the eyes of the public, who had loved Essex and mourned him deeply. Cecil, who had never been very popular, now became a hate figure. In ballads like Essex's Last Good Night, Cecil was viciously attacked. 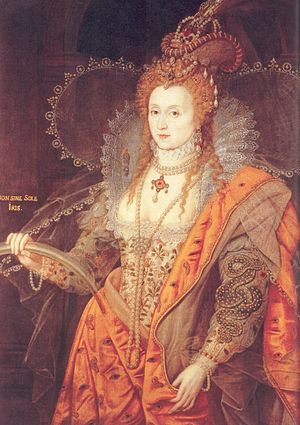 The Rainbow Portrait of Elizabeth I at Hatfield House has been seen as reflecting Cecil's role as spymaster after the death of Sir Francis Walsingham.[5]

Cecil, like his father, greatly admired the Queen, whom he famously described as being "more than a man, but less than a woman". Despite his careful preparations for the succession, he clearly regarded the Queen's death as a misfortune to be postponed as long as possible. During her last illness, when Elizabeth would sit motionless on cushions for hours on end, Cecil boldly told her that she must go to bed. Elizabeth roused herself one last time to snap at him: "Must is not a word to be used to princes, little man... your late father were he here would never had dared to speak such a word to me"; but she added wryly "Ah, but ye know that I must die, and it makes you presumptuous".

In 1603, his brother-in-law Lord Cobham, along with Sir Walter Raleigh, was implicated in both the Bye Plot and the Main Plot, an attempt to remove James from the throne and replace him with his first cousin Lady Arbella Stuart. Cecil was one of the judges who tried them for treason: at Raleigh's trial Cecil was the only judge who appeared to have some doubts about his guilt (which is still a matter of debate, although the prevailing view now is that Ralegh was involved in the Plot to some extent). Though they were found guilty and sentenced to death, both Cobham and Raleigh were reprieved at the last minute; this was almost certainly due in part to Cecil's pleas for mercy, although the King kept his intentions a secret until the very last minute.

King James raised him to the peerage on 20 August 1603 as Baron Cecil, of Essendon in the County of Rutland, before creating him Viscount Cranborne in 1604 and then Earl of Salisbury in 1605.[6] The now-Lord Salisbury was appointed to the Order of the Garter as its 401st Knight in 1606. Although James would often speak disparagingly of Cecil as "my little beagle" he gave him his absolute trust. "Though you are but a little man, I shall shortly load your shoulders with business", the King joked to Cecil at their first meeting. Cecil, who had endured a lifetime of jibes about his height, (even Queen Elizabeth had called him "little man"), is unlikely to have found the joke funny, while the crushing weight of business with which the King duly loaded him probably hastened his death at the age of forty-nine. 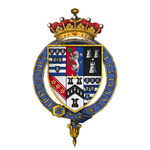 James persuaded Salisbury to exchange his Hertfordshire house Theobalds for the royal palace at Hatfield, a relatively old-fashioned property. Cecil proceeded to rebuild Hatfield Palace as Hatfield House. It was at Theobalds that Cecil in 1606 entertained the King and his brother-in-law King Christian IV of Denmark, under the sardonic eye of Queen Elizabeth's godson, Sir John Harrington. According to Harrington, the masque put on to honor the two Kings was a drunken fiasco: "the entertainment and show went forward, and most of the players went backward, or fell down, wine did so occupy their upper chambers".

Cecil was the principal discoverer of the Gunpowder Plot of 1605: when he first learned of it, and to what extent he acted as an agent provocateur, has been a subject of controversy ever since. On balance, it seems most likely that he had heard rumors of a plot, but had no firm evidence until the Catholic peer William Parker, 4th Baron Monteagle showed him the celebrated anonymous letter warning Montaegle to stay away from the opening of Parliament. The Gunpowder Plot itself was a belated reaction to what was seen as the King's betrayal of a pledge to repeal, or at least mitigate, the Penal Laws. Cecil was undoubtedly among those who advised James not to tamper with the existing laws. However his attitude to Roman Catholics was not, for the time, especially severe: he admitted that he was unhappy with the notorious statute of 1585 by which any Catholic priest who was found guilty of acting as a priest in England was liable to the death penalty in its most gruesome form. Like most moderate Englishmen, he thought that exile, rather than death, was the appropriate penalty for the priesthood.

Salisbury served as both the third chancellor of Trinity College, Dublin and chancellor of the University of Cambridge[7] between 1601 and 1612. In addition, the Cecil family fostered arts: they supported musicians such as William Byrd, Orlando Gibbons and Thomas Robinson.[8]

His motto was "Sero, sed serio", which can be translated as 'late but in earnest'.[9]

The Kingdom of Ireland was a major source of concern and expense during his time in government. The Nine Years War there ended with the leader of the rebels Hugh O'Neill, Earl of Tyrone submitting to the Crown and being restored to his estates following the Treaty of Mellifont (1603). Four years later Tyrone led his followers into exile during the Flight of the Earls. The response of the government was to plan a Plantation of Ulster, to share out Tyrone's lands between the Gaelic Irish lords and settlers from Britain. In 1608 Sir Cahir O'Doherty launched O'Doherty's Rebellion by attacking and burning Derry. In the wake of O'Doherty's defeat at Kilmacrennan a much larger plantation was undertaken.

In 1610–11 Cecil worked hard to persuade Parliament to enact the Great Contract, under which the King would give up all his feudal and customary sources of revenue in return for a fixed annual income of £200,000. The project was one to which Cecil attached great importance, but neither the King nor Parliament showed much enthusiasm for it, and it lapsed when the King, against Cecil's advice, dissolved Parliament in 1611. This was a double blow to Cecil, who was sick and prematurely aged, and conscious that the King now increasingly preferred the company of his male favourites like Robert Carr, 1st Earl of Somerset. Although it was a failure in the short term, the Great Contract was revived as a solution to the nation's finances in 1660, and formed the basis for the financial settlement at the Restoration of Charles II.

In poor health, and worn out by years of overwork, Salisbury in the spring of 1612 went on a journey to take the waters at Bath in hope of a cure, but he obtained little relief, and started on the journey home. He died of cancer, "in great pain and even greater wretchedness of mind", at Marlborough, Wiltshire, on 24 May 1612. He was buried in Hatfield parish church in a tomb designed by Maximilian Colt.[3]