Kildare was the son of the Hon. Robert FitzGerald, younger son of George FitzGerald, 16th Earl of Kildare. His mother was Mary, daughter of James Clotworthy.[3]

He was unusual among the Irish nobility of his time for his strong and sincere religious beliefs. Richard Parsons, 1st Earl of Rosse, a notorious rakehell, just before his death in 1741, received a letter from his local vicar reproaching him for his debauchery and blasphemy and urging him to repentance. Rosse, noting that the letter was addressed only to "My Lord", as a dying joke put it in a fresh envelope and forwarded it to Kildare, who naturally assumed that it was an attack on him and was predictably furious. He demanded an inquiry by the Archbishop of Dublin, but the hoax was quickly exposed. 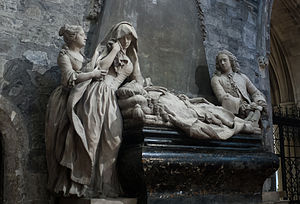 Monument dedicated to Robert FitzGerald, showing how he was mourned by his family, in Christ Church Cathedral.

Lord Kildare married Lady Mary, daughter of William O'Brien, 3rd Earl of Inchiquin, on 7 March 1708. They had four sons and eight daughters, including:

Lord Kildare died in February 1743, aged 68, and was succeeded in the earldom by his son James, who was created Marquess of Kildare in 1761 and Duke of Leinster in 1766.[3] A monument dedicated to him was created by Henry Cheere, showing how he was mourned by his wife and his surviving children Margaretta and James. This monument was first put at the north side of the choir of Christ Church Cathedral but later moved into the south transept.[2][5]