Fludd is best known for his compilations in occult philosophy. He had a celebrated exchange of views with Johannes Kepler concerning the scientific and hermetic approaches to knowledge.[1]

He was born at Milgate House, Bearsted, Kent, the son of Sir Thomas Fludd, a high-ranking governmental official (Queen Elizabeth I's treasurer for war in Europe), and Member of Parliament.[2] He entered St John's College, Oxford in 1591, graduating B.A. in 1597 and M.A. in 1598.[3] His mother was Elizabeth Andrews Fludd.[4]

Between 1598 and 1604, Fludd studied medicine, chemistry and hermeticism on the European mainland. His itinerary is not known in detail.[3] On his own account he spent a winter in the Pyrenees studying theurgy (the practice of rituals) with the Jesuits.[5]

On his return to England, Fludd entered Christ Church, Oxford. In 1605 he graduated M.B. and M.D. He then moved to London, settling in Fenchurch Street, and making repeated attempts to enter the College of Physicians. Fludd encountered problems with the College examiners, both because of his unconcealed contempt for traditional medical authorities, and because of his attitude. After at least six failures, he was admitted in 1609. Subsequently both his career and his standing in the College took a turn very much for the better. He was on good terms with Sir William Paddy.[3] Fludd was one of the first to support in print the theory of the circulation of the blood of the College's William Harvey.[6] To what extent Fludd may have actually influenced Harvey is still debated, in the context that Harvey's discovery is hard to date precisely.[7] The term "circulation" was certainly ambiguous at that time.[8] 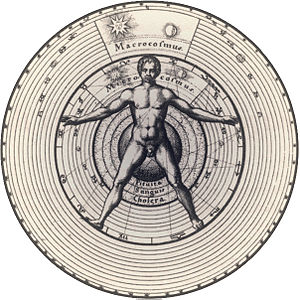 Fludd's illustration of man the microcosm within the universal macrocosm

Fludd's works are mainly controversial. In succession he defended the Rosicrucians against Andreas Libavius, debated with Kepler, argued against French natural philosophers including Gassendi, and engaged in the discussion of the weapon-salve.[9]

Fludd was not a member of the Rosicrucians, as often alleged, but he defended their thought.[10] He produced a quick work, the Apologia Compendiaria, against the claims of Libavius that the Rosicrucians indulged in heresy, diabolical magic and sedition, made in his Analysis confessionis Fraternitatis de Rosea Cruce (Analysis of the Confession of the Rosy Cross) of 1615. Fludd returned to the subject at greater length, the following year.[11]

It has been said that what Fludd did was to detach occultism, both from traditional Aristotelian philosophy, and from the coming (Cartesian) philosophy of his time.[12]

Johannes Kepler criticised Fludd's theory of cosmic harmony in an appendix to his Harmonice Mundi (1619).[13]

Against the natural philosophers 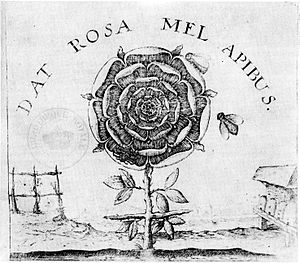 Titlepage of the Summum Bonum under the name of Joachim Frizius

According to Brian Copenhaver, "Kepler accused Fludd of being a theosophist, and Kepler was right". Fludd was well-read in the tradition coming through Francesco Giorgi.[15] Marin Mersenne attacked him in Quæstiones Celebres in Genesim (1623).

Pierre Gassendi took up the controversy in an Examen Philosophiæ Fluddanæ (1630). This was at Mersenne's request. Gassendi attacked Fludd's neo-Platonic position. He rejected the syncretic move that placed alchemy, cabbala and Christian religion on the same footing; and Fludd's anima mundi. Further he dismissed Fludd's biblical exegesis.[9][16]

Fludd also wrote against The Tillage of Light (1623) of Patrick Scot; Scot like Mersenne found the large claims of hermetic alchemy to be objectionable.[17] Fludd defended alchemy against the criticisms of Scot, who took it to be merely allegorical. This work, Truth's Golden Harrow,[18] remained in manuscript.[19]

Cosmology and other works 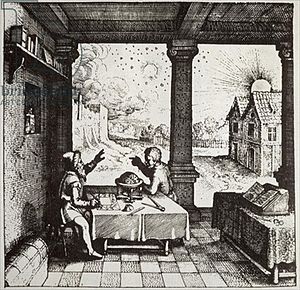 Fludd's philosophy is presented in Utriusque Cosmi, Maioris scilicet et Minoris, metaphysica, physica, atque technica Historia (The metaphysical, physical, and technical history of the two worlds, namely the greater and the lesser, published in Germany between 1617 and 1621);[20] according to Frances Yates, his memory system (which she describes in detail in The Art of Memory, pp. 321–341) may reflect the layout of Shakespeare's Globe Theatre (The Art of Memory, Chapter XVI).

In 1618, Fludd wrote De Musica Mundana (Mundane Music) which described his theories of music, including his mundane (also known as "divine" or "celestial") monochord.[21]

In 1630, Fludd proposed many perpetual motion machines. People were trying to patent variations of Fludd's machine in the 1870s. Fludd's machine worked by recirculation by means of a water wheel and Archimedean screw. The device pumps the water back into its own supply tank.[22][23] 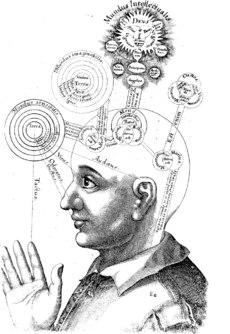 Microcosm diagram of the mind, derived from cruder versions in predecessors, such as Albertus Magnus and Gregor Reisch.[24]

An unpublished manuscript, copied by an amanuensis, and headed Declaratio breuis, &c., is in the Royal manuscripts, British Library, 12 C. ii. Fludd's Opera consist of his folios, not reprinted, but collected and arranged in six volumes in 1638; appended is a Clavis Philosophiæ et Alchimiæ Fluddanæ, Frankfort, 1633.[9]

William T. Walker, reviewing two books on Fludd in The Sixteenth Century Journal (by Joscelyn Godwin, and William Huffman), writes that "Fludd relied on the Bible, the Cabbala, and the traditions of alchemy and astrology. Many of his contemporaries labelled Fludd a magician and condemned him for his sympathy for the occult."[25] He cites Godwin's book as arguing that Fludd was part of the tradition of Christian esotericism that includes Origen and Meister Eckhart. He finds convincing the argument in Huffman's book that Fludd was not a Rosicrucian but was "a leading advocate of Renaissance Christian Neo-Platonism. Fludd's advocacy of an intellectual philosophy in decline has done much to assure his general neglect."[25]