Robert Gesink (born 31 May 1986 in Varsseveld) is a Dutch professional cyclist for UCI ProTeam LottoNL–Jumbo.[2] His major victories include the 2012 Tour of California, the 2011 Tour of Oman and the 2010 Grand Prix Cycliste de Montréal. Gesink also won the Giro dell'Emilia twice and offered some good performances on Grand Tours and one-week stage races, thanks in part to his climbing and time trialing abilities.[3]

At the Junior World Championships of 2004 UCI Road World Championships in Verona, Gesink finished eighth in the individual time trial and sixth in the road race, while riding for team De Peddelaars in Aalten. After this rather successful WC he went to team Lowik-Van Losser for one year. He joined the Rabobank Continental team in 2006. He finished third overall in Volta ao Algarve and won the overall classification and the third stage of Settimana Ciclista Lombarda. He later won a stage and the overall classification of the Circuito Montañés and finished second in the prestigious Tour de l'Avenir. Gesink initially signed a two-year deal with Rabobank Continental but team manager Theo de Rooij decided to move him to the Rabobank UCI ProTeam for the 2007 season.[4]

In his first year as professional cyclist, Gesink won the young riders jersey in the Tour of California. He finished 9th in his first UCI Pro Tour race ever, in La Flèche Wallonne. After riding another top 15 in the Tour de Romandie won by his teammate Thomas Dekker, he won his first race as professional at the queen stage in the Tour of Belgium riding away from everyone on Côte de La Redoute. The next year, he finished just outside the top ten in the Clásica de San Sebastián, fifth in the Deutschland Tour, and second in the Tour de Pologne. He subsequently got selected for the UCI Road World Championships in Stuttgart. In the Giro di Lombardia he finished fifteenth.

In his 2nd year as professional, in 2008, he showed progression by winning the hardest stage in the Tour of California, where Gesink rode away on the final climb, with only Levi Leipheimer holding his wheel. They stayed ahead on the final 35 kilometers of downhill and flat and Leipheimer didn't contest Gesink in the sprint. Gesink won the young riders jersey again and finished 9th in the general classification. In the Paris–Nice he finished second in the stage up to Mont Serein, five kilometers before the top of Mont Ventoux, where he was outsprinted by Cadel Evans. He then lost the jersey in the penultimate stage to Cannes, when he got isolated on the Col du Tanneron which, together with Gesink's overly careful descent, allowed Davide Rebellin to take the leader's jersey. He finished fourth in the overall classification, 51 seconds behind Rebellin, which won Gesink the youth classification.[5] He also finished twelfth in Vuelta al País Vasco and completed a successful Ardennes classics by finishing fourth in La Flèche Wallonne. In September, he then finished seventh in his first Grand Tour, the Vuelta a España. 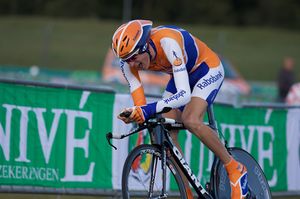 Gesink at the 2009 Vuelta a Espana

In 2009, Gesink finished fourth overall in the Dauphiné. He started his first Tour de France but broke his wrist during a crash on stage 5. He completed the stage, but had to withdraw from the Tour due to his injuries.[6] He recovered in time to enter into the Vuelta a España. He finished the Vuelta a España in 6th place, he was in 2nd place, but due to a fall where he sustained deep cuts in his knee, he was too injured to keep up in the final mountain stage. Afterwards Gesink focused on regaining his form for the World Championships in Mendrisio, but he had not recovered fast enough and finished off the pace. However, a week later he was back to his old self and took the victory in the Giro dell'Emilia, beating Jakob Fuglsang and Thomas Lövkvist to the line in a sprint uphill. He also took 6th place in the Giro di Lombardia and finished the season as 10th on the UCI World Ranking. 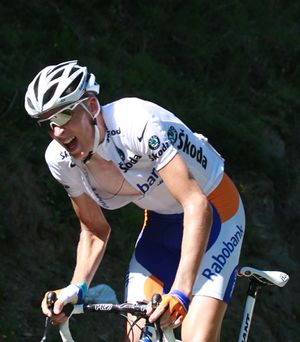 Gesink wearing the White Jersey at the 2010 Tour de France

Gesink’s schedule for 2010 was about the same as that of 2009, only this time he did manage to get a good result in the Tirreno–Adriatico (5th).[7] Because of the absence of, among others, Alberto Contador and Cadel Evans, he started as one of the favorites for the Tour of the Basque Country. He impressed during the most important stage, was in the top 3 and even had a chance at winning the tour, when in stage 5 he fell once again. Eventually he finished 9th and seemed to have the form he needed for the “klassiekers” (classic events).

In the Amstel Gold Race, the La Flèche Wallonne and Liège–Bastogne–Liège he had a disappointing race and couldn’t compete for the victory. After that he went on altitude training in the Sierra Nevada. He didn’t compete in any events for a while, while focusing on the Tour de France. His form showed during the Tour de Suisse, where he was victorious in the most difficult stage. With this win he took over the leader’s jersey from Tony Martin. In the closing time trial he had a bad day and lost his leading position to Fränk Schleck. He finally finished 5th.[8]

He participated in the 2010 Tour de France for the second time, and completed it for the first time. Gesink ended 6th in the general classification, the first Dutchman to end so high in the general classifications in over a decade, and 2nd in the young rider classification. After Contador and Menchov were disqualified because of doping issues, Gesink formally ended 4th. He also wore the White Jersey from stage 10 to 15. After the Tour, Gesink won the Giro dell'Emilia for the second straight year. In October, Gesink had to mourn his father, who died as the result of a cycling accident.[9]

The start of Gesink's 2011 season was productive, with two stage wins in the Tour of Oman (one uphill finish and one individual time trial in which he beat World Champion Fabian Cancellara), and winning the overall classification and the youth classification. He took the race lead after the 4th stage of the Tirreno–Adriatico, but lost it a day later to Cadel Evans. In the closing time trial, Gesink climbed in the general classification from five to second overall. He continued to show his good form in the Vuelta al País Vasco where he finished third overall.

He did not continue this good form in the Hills Classics and a ninth place at the Amstel Gold Race was his best performance in the three races dominated by Philippe Gilbert. In September he suffered a crash in training where he broke his leg in four places, and had a surgical operation which left screws and pins in his body.[10]

After an unproductive start to the season, Gesink found his form in the Tour of California. He finished third in the time trial and enjoyed a prestigious victory on the slopes of Mount Baldy in stage 7 of the race, where he attacked 4.5 kilometres (2.8 mi) from the finish to take the leader's jersey and the mountaintop stage win.[11] His leading position was never seriously tested in the short final stage, and he won his first tour since the 2011 Tour of Oman.

For the 2012 Tour de France, he was considered one of the Dutch hopefuls who might finish in the top ten, but he fell in the massive crash that occurred on the sixth stage, damaging his ribs. After battling through the pain, he abandoned the ordeal on stage 11.[12] He then went on to participate in the Vuelta a España, and he made an impact by finishing in sixth position overall behind the winner Alberto Contador (Saxo Bank–Tinkoff Bank). Gesink was always competitive in the mountains, which allowed him to retain such a high placing.[13]

Gesink had an uneventful 2013 season. He aimed to win the Giro d'Italia though he abandoned in the second week. His only victory was the Grand Prix Cycliste de Quebec which was in September. 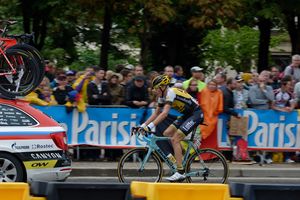 Gesink had a promising start to his 2014 season finishing 6th in the Tour Down Under and 5th in the Tour of Oman. His season however was disrupted by heart problems for which he received surgery, preventing him from riding the Tour de France, switching his hopes to the Vuelta a España. However, while he was in seventh position Overall at the Vuelta, he withdrew before Stage 18 to be with his pregnant wife who was hospitalized.[14]

After racing the Volta ao Algarve, Gesink suffered a knee injury. He came back to the La Fleche Wallonne to sign a 25th placing. He then raced the Tour de Romandie and finished 15th overall.[15] Then he focused on the Tour de France. Gesink rode in the Tour of Suisse in preparation for the Grand Tour and finished in a solid 9th place. But he did even better in France, where he finished 6th, right behind big names like Contador and Nibali.[16]