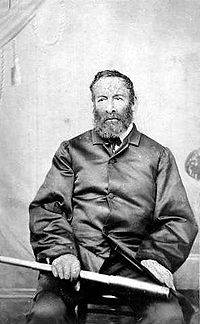 Robert Hoddle (20 April 1794 – 24 October 1881)[1] was a surveyor of Port Phillip District (later known as Victoria (Australia)) in the 1830s, and the creator of the Hoddle Grid, the street grid system upon which inner city Melbourne is based. He was also an accomplished artist and depicted scenes of the Port Phillip region as well as New South Wales. Hoddle was one of the earliest-known European artists to capture images of Ginninderra, an area now occupied by Canberra, Australia's National Capital.

Hoddle, the son of a bank clerk for the Bank of England, was born in Westminster, London.[1] He became a cadet-surveyor in the British army in 1812. Hoddle worked in the Ordnance Department and took part in the trigonometrical survey of Great Britain.[1] Hoddle then sailed for the Cape Colony, South Africa in 1822 where he worked on military surveys.[1]

Hoddle migrated to the Australian colonies, arriving in Sydney, New South Wales, aboard the William Penn in July 1823.[1] Governor Brisbane appointed him assistant surveyor under Surveyor-General John Oxley.[1] Hoddle spent the next twelve years in Queensland and later still in New South Wales where he surveyed the sites for the towns of Berrima and Goulburn as well as Bell's Line of Road in the Blue Mountains. Between 1830 and 1836, Hoddle made several visits to the rural district now occupied by the Australian Capital Territory (A.C.T.), where he surveyed property boundaries. Squatters were urgently pressing for government surveyors to legalise their rural holdings. Hoddle’s field book indexes the history of the aforementioned areas and pastoralists— George Palmer, Robert Campbell and Hamilton Hume.[2] 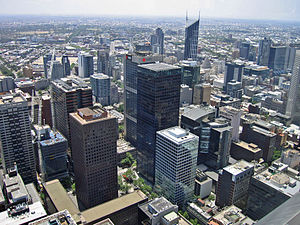 Hoddle arrived in Port Phillip the future site for Melbourne, in March 1837 and was appointed senior surveyor with his assistants D'Arcy and Darke;[1] he was to take charge of the surveying work which had been begun by Robert Russell.[1] Whether Hoddle planned Melbourne or used Russell's ideas has been a subject of controversy. Hoddle's first map of Melbourne, completed on 25 March 1837, covered the area from Flinders Street to Lonsdale Street, and from Spencer Street to Spring Street. The principal streets were made one and a half chains wide (30 m), and the smaller, then intended merely to furnish back entrances, a half chain wide (10 m). Later Hoddle provided for wide exits from the city such as Wellington and Victoria parades, and the continuation from Elizabeth Street to Sydney and Mount Alexander roads. He also made provisions for squares and reserves in the city itself and in the immediate suburbs. He was in no way responsible for the narrow streets which later were formed in Fitzroy, Collingwood and Richmond. These were made when comparatively large areas were subdivided by their owners.

By 1838 Melbourne, Williamstown and Geelong were quickly surveyed for deliverance to the market as real estate. He fixed the site of Geelong in spite of opposition from the Sydney authorities who favoured Point Henry. His designs were an innovation for Australian cities, as Melbourne and its inner suburbs were planned in the grid style. In 1839, he provided for a railway linking Melbourne and Hobsons Bay.

Artist in ink and watercolours

Some of the paintings he made during this time are held at the National Library of Australia. They include:

Additional works by Hoddle include:

William Lonsdale appointed Hoddle as auctioneer at the first sale of crown land on 1 June 1837, at which he sold half-acre (0.2 ha) allotments for £18 to £78, considered at the time a very high price.[3] Hoddle's commission was £57 12s. 7d., from which he bought two allotments for himself at a cost of £54.[1] Hoddle built himself a house on the corner of Bourke and Spencer Streets where, in retirement, he tended his trees, played organ and flute and translated Spanish.

In 1840, Hoddle was granted a gratuity of £500 as he was leaving the survey department on account of ill-health. However, after a few months holiday he recovered his health, took up his duties again, and the gratuity was not paid to him. He later did valuable work in the country districts of Victoria, became Surveyor General of Victoria in 1851, and retired in July 1853 with a pension of £1000 a year. He had bought in 1837 the block of land in Elizabeth Street, Melbourne, on which the Commonwealth Bank of Australia now stands, for a comparatively small sum, and he became a wealthy man. After his retirement he took an interest in the Old Colonists' Association[1] and was elected a life governor in December 1873.

He was married twice and left a widow and children.

He died at his residence at the west end of Bourke Street, the site of the present general post office, on 24 October 1881.