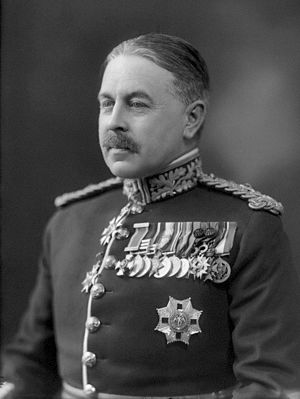 Hutchison was the son of Alexander Hutchison, of Braehead, Kirkcaldy, Fife. His younger brother Sir Balfour Oliphant Hutchison (1889–1967) was a Lieutenant-General in the British Army.[1]

Hutchison was a Lieutenant in the Fife Artillery, a Militia regiment, when he received a regular commission as a Second lieutenant in the 7th Dragoon Guards on 10 February 1900.[2] He was promoted to Lieutenant on 3 October 1900. The following year he was seconded to the Imperial Yeomanry, serving in the Second Boer War in South Africa, where he was appointed lieutenant and adjutant of the 12th Battalion on 25 November 1901,[3] with the temporary rank of Captain from the same day.[4] He relinquished his appointment as adjutant and his temporary appointment as captain on 12 May 1902,[5] shortly before the end of the war, and left Cape Town the following month, returning home on SS Plassy.[6] He was promoted to the substantive rank of Captain with the 11th Hussars in 1905 and Major with the 4th Dragoon Guards in 1912. He was a General Staff Officer, 3rd Grade, from 1912–1914, and promoted to 2nd Grade in 1914. He served in World War I as General Staff Officer 1st Grade, 1915–1917; temporary Major-General and Director of Organisation at the War Office from May 1917–1919; DAG 1919. He was Mentioned in Despatches six times, and awarded the Distinguished Service Order in 1915, appointed a Companion of the Order of the Bath in 1918, and knighted via Knight Commander of the Order of St Michael and St George in 1919. He was also awarded the Croix de Guerre, the Order of the Crown of Italy), the Légion d'honneur, and the American Army Distinguished Service Medal. He retired in 1923.

Hutchison was National Liberal Member of Parliament for Kirkcaldy Burghs from 1922 to 1923, Liberal member for Montrose Burghs from 1924 to 1931 and Liberal National member for that constituency from 1931 to 1932. He served as Scottish National Liberal Whip in 1923, as a Liberal Whip from 1924 to 1926 and as Chief Liberal Whip from 1926 to 1930. On his retirement from the House of Commons in 1932, he was raised to the peerage as Baron Hutchison of Montrose, of Kirkcaldy in the County of Fife.[7] He later served under Stanley Baldwin and Neville Chamberlain as Paymaster-General from 1935 to 1938 and was appointed a Privy Counsellor in 1937.[8]

Apart from his military and political careers he was a director of the National Bank of Australasia, Phœnix Assurance Co., and other business interests.

Lord Hutchison of Montrose married firstly Agnes, daughter of William Drysdale, in 1905. After her death he married secondly Alma, daughter of W. G. Cowes, in 1942. He died in June 1950, aged 76, when the barony became extinct.[1]