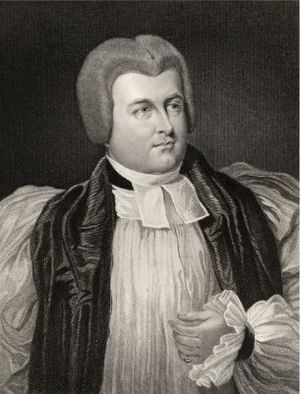 The son of the Rev. Colston Carr, a schoolmaster at Twickenham, who was afterwards vicar of Ealing, he was born at Twickenham. He received his primary education in his father's school before being sent to Merchant Taylors' School, London.[1] Afterwards he went up to Worcester College, Oxford. In 1798 he was ordained by the Bishop of Salisbury, and was shortly presented to the vicarage of Brighton. In 1806 he graduated M.A.

While he was vicar of Brighton his eloquence commended him to the Prince Regent, and a friendship began which only terminated with the death of George IV. In 1820 he was appointed dean of Hereford, and in the same year he took the degrees of B.D. and D.D. Four years later he was consecrated bishop of Chichester, and, along with his bishopric, held a canonry in St Paul's Cathedral. He was also appointed clerk to the closet, an honorary position which he held until the accession of Queen Victoria, when he was dismissed for political reasons.

Carr was the prelate who attended George IV during his last illness. In 1831 he was translated to the bishopric of Worcester, in fulfillment, as it was understood at the time, of a promise made by the late king. In the House of Lords, he was one of the bishops who voted against the Roman Catholic Relief Bill, and while not speaking against the measure, opposed it in other ways. His views were orthodox and strict, though leaning towards the evangelical.

He died in 1841, aged 67, at Hartlebury Palace, from paralysis, and was buried in the churchyard of the parish. His only published works were sermons preached for charitable objects.

In 1797 he married Nancy, daughter of John Wilkinson of Roehampton, by whom he had a large family, of which only four children survived him. His daughter Maria (1801–1888) in 1842 married the Worcester solicitor and MP William Laslett but they separated shortly after. Their marriage was fictionalised in the popular novel East Lynne. His younger brother Lieutenant-Colonel Sir Henry William Carr KCB (1777–1821) in 1815 married Jane, widow of the assassinated prime minister Spencer Perceval, and became stepfather to her twelve surviving children.