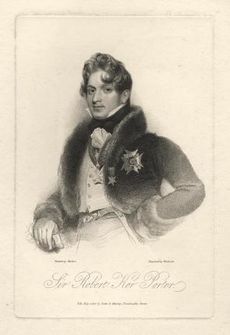 Self portrait of Robert Ker Porter

Sir Robert Ker Porter, KCH (1777–1842) was a Scottish artist, author, diplomat and traveller. Known today for his accounts of his travels in Spain, Portugal and Russia, he was one of the earliest panorama painters in Britain, was appointed historical painter to Tsar Alexander I of Russia and served as British consul in Venezuela.

Porter was born in Durham in 1777, one of the five children of William Porter, an army surgeon. His father died in 1779, and the following year his mother took him to Edinburgh, where he spent much of his early life.[1] He decided that he wanted to become a painter of battle scenes, and in 1790 his mother took him to see Benjamin West, who thought enough of his sketches to procure him admission as a student at the Royal Academy. In 1792 he received a silver palette from the Society of Arts for a drawing entitled The Witch of Endor. In 1793 he was commissioned to paint an altarpiece for Shoreditch church; in 1794 he painted Christ allaying the Storm for the Roman Catholic chapel at Portsea, Portsmouth; and in 1798 St. John Preaching for St John's College, Cambridge.[1] 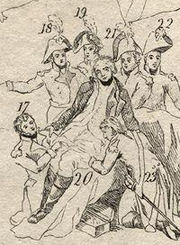 In 1800 he obtained work as a scene-painter at the Lyceum Theatre, and in the same year caused a sensation when his Storming of Seringapatam, a panorama 120 feet (37 m) long, carried round three-quarters of a circle, was exhibited at the Lyceum. It was painted, according to his sister Jane, in six weeks. Other successful works in the same format were the Battle of Lodi (1803), also exhibited at the Lyceum, and the Defeat of the French at the Devil's Bridge, Mont St. Gothard, by Suwarrow in 1804.[1] He also showed several pictures at the Royal Academy including Death of Sir Philip Sydney in 1792, The Defeat of King Stephen at the Battle of Lincoln in 1793, and the Battle of Northampton in 1796.

Russia, Spain and the Middle East

In 1804 he was appointed historical painter to Tsar Alexander I of Russia. In St Petersburg he was employed upon some vast historical paintings for the Admiralty Hall. During his residence in the city he won the affections of a Russian princess, Mary, daughter of Prince Theodor von Scherbatoff but complications connected with their courtship necessitated his leaving Russia, whereupon he travelled in Finland and Sweden, and he was knighted by King Gustavus IV in 1806. He then visited several German courts, and in 1807 was created a knight of St Joachim of Würtemberg.[1]

While in Sweden he had got to know General Sir John Moore, whom he accompanied to Spain. He was with the military expedition throughout, was present at the Battle of Coruña and the death of the general, and made many sketches of the campaign. In the meantime his Travelling Sketches in Russia and Sweden during the years 1805–1808 had appeared in 1809, elaborately illustrated by the author. It was soon followed by Letters from Portugal and Spain, written during the march of the troops under Sir John Moore. In 1811 he returned to Russia, and on 7 February 1812 he married his Russian princess (who was to die of typhus at St. Petersburg in September 1826). He mixed in Russian military and diplomatic circles, and became well acquainted with the Russian version of the events of 1812–13, of which he gave an account in his Narrative of the Campaign in Russia during 1812.[1] 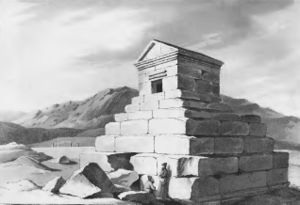 He had returned to England before the appearance of this book, and on 2 April 1813 he was knighted by the Prince Regent. He was soon abroad again, and in August 1817 he left from St. Petersburg on a long journey which took him through the Caucasus to Teheran, and then southwards via Ispahan to the site of the ancient Persepolis, where he made drawings and transcribed a number of cuneiform inscriptions. After a stay at Shiraz, he returned to Ispahan, and proceeded to Ecbatana and Bagdad, and then, following the route of Xenophon's Katabasis, to Scutari.[1] He was the first person to locate the mausoleum of Cyrus the Great in Pasargadae near Shiraz.[2] He published an account of his journey in Travels in Georgia, Persia, Armenia, Ancient Babylonia, 1817–1820. At Tehran he had an audience with the Persian monarch Fath Ali Shah, whose portrait he drew, and from whom 1819 he received the order of the Lion and the Sun.[1]

After returning to England, he soon left again for Russia, but in 1826 he was appointed British consul in Venezuela, a position he held for fifteen years. He continued to paint during this period, his works including several large religious pieces, and a portrait of Simón Bolívar.[1]

He returned to England in 1841. After a short stay with his brother at Bristol, he went to visit his daughter, who had married a Russian army officer, in St Petersburg. On 3 May 1842 he wrote from St Petersburg to his brother that he was about to sail for England, but died suddenly the next day as he was returning in his drosky from a farewell visit to Emperor Nicholas I. He was buried in St. Petersburg, and a monument was erected to his memory in Bristol Cathedral.[1]