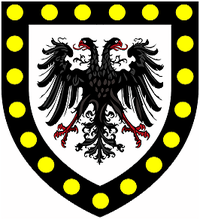 Arms of Killigrew: Argent, an eagle displayed with two heads sable a bordure of the second bezantée. The bezantée bordure indicates a connection to the ancient Earls of Cornwall

Sir Robert Killigrew (1580 – 1633) was an English courtier and politician who sat in the House of Commons at various times between 1601 and 1629. He served as Ambassador to the United Provinces.

Killgrew was born at Lothbury, London, the son of William Killigrew and his wife Margery (Mary) Saunders, daughter of Thomas Saunders of Uxbridge, Middlesex.[1] In January 1591, he matriculated at Christ Church, Oxford at the age of 11.[2] He travelled abroad in 1596 and may have become an official of the Privy Chamber in 1601. He was elected MP for St Mawes in 1601.[1]

Killigrew was knighted by King James I in 1603. In 1604 he was elected MP for Newport.[1] It is possible that he travelled to Jamestown in 1604. His name appears in the Second Charter of Virginia as a backer. In 1606 he was appointed ambassador to the United Provinces.[1]

In June 1612, Killigrew was noted as "one of Carr's favourites" according to John Chamberlain. The following May, he was committed to the Fleet Prison for an unknown offence. Having become famous for his concoctions of drugs and cordials, he was at first suspected of complicity in the death of Sir Thomas Overbury in September 1613, but was subsequently officially exonerated.

In 1614, Killigrew was elected MP for Helston.[1] On 12 May that year, he was involved in an altercation in the House of Commons. In July, he was appointed Keeper of Pendennis Castle, Falmouth, and a JP that same year. He is recorded as fighting a duel with Captain Burton in 1618. In October that year he was appointed an Officer of Protonotary of Chancery, and in December the following year was mentioned favourably by Buckingham.

Killigrew was a knight of Arwenack in Falmouth, Cornwall. He died a wealthy man in 1633 in Bath, Somerset, with the probate of his will on 12 May.[1]

He married Mary Woodhouse of Kimberley, Norfolk, (1584–1656), and they had several notable children: