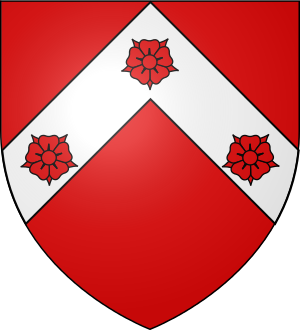 Knolles arms: Gules, on a chevron argent three roses of the first

Sir Robert Knolles (c. 1325 – 15 August 1407) was an important English knight of the Hundred Years' War,[1] who, operating with the tacit support of the Crown, succeeded in taking the only two major French cities, other than Calais and Poitiers, to fall to Edward III.[citation needed] His methods, however, earned him infamy as a freebooter and a ravager: the ruined gables of burned buildings came to be known as "Knolly's mitres".[2]

Born in Cheshire, Knolles first appears as the captain of several castles throughout Brittany in the mid-14th century, including Fougeray, Gravelle and Chateaublanc. He was one of the English champions at the Combat of the Thirty in 1351, where he was captured. He then contributed himself and 800 men to the 1356 chevauchée of Henry of Grosmont, 1st Duke of Lancaster through Normandy, a diversionary campaign to draw King John II of France north and thus leave the Black Prince free to embark on the famous Poitiers campaign.[3] With France in disarray after the Battle of Poitiers, King Charles II of Navarre assumed command of the rebellion in Paris, and Knolles joined up with the army of Philip of Navarre (Charles' younger brother) as they temporarily held the capital against the Dauphin in 1358.[4]

Knolles' finest hours were to come that autumn when he led a Great Company of 2,000–3,000 Anglo-Gascons into the Loire Valley, establishing several forward garrisons at important towns like Châteauneuf-Val-de-Bargis. He then advanced into the Nivernais, which was unsuccessfully defended for Margaret III of Flanders by the Archpriest Arnaud de Cervole, the adventurer who had raised the first Great Company the previous year.[5]

In 1359 Knolles reached Auxerre, which fell after a two-month siege on 10 March. After the city had surrendered, Knolles was knighted by two subordinates, previously he had formally only been ranked as a squire. The sack of Auxerre proceeded with little violence and destruction, Knolles and his soldiers were professionals who intended to maximize their profit. The city was carefully ransacked for valuables and the citizens assessed for ransom. At the end a huge ransom was extorted for not destroying the city, although this was only partly paid. The following month he returned to Chateauneuf to plot the invasion of the Rhône Valley with Hugh Calveley. Marching south, a forward base was established on the Allier River at Pont-du-Chateau, from where they launched the invasion of the Velay. Knolles then reunited with Calveley to besiege the important city of Le Puy, which fell in July 1359. As they continued to the Papal city of Avignon, their path was barred by the army of Thomas de la Marche, Deputy for Louis II, Duke of Bourbon, at which point both English commanders retreated and dissolved their companies.[3]

In 1370 he was given a large grant of lands and money to raise an army to invade northern France. He landed at Calais in August with 6,000 mounted men and carried out a raid deep into French territory, burning villages on the outskirts of Paris but failing to bring the French King Charles V out to battle. He then turned towards Gascony and began capturing and fortifying castles and churches in the region between the rivers Loir and Loire. However he had to cope with much criticism from his younger subordinate commanders such as Sir John Minsterworth who were spoiling for a fight. When it became known that French armies under the command of Bertrand du Guesclin were closing in on them, Knolles proposed to retreat into Brittany but most of the army refused. He therefore marched away with his own retinue, leaving the bulk of the army where they were, to be comprehensively defeated and slaughtered at the Battle of Pontvallain on 4 December.

Knolles passed the winter in his castle at Derval on the Breton March and afterwards attempted to evacuate his men and those of Minsterworth, who had managed to join him with his surviving troop, from the port of Saint-Mathieu. However for lack of ships most of the English soldiers had to be left behind on the shore, to be wiped out by the French under Olivier de Clisson. In 1372 Knolles was found by the King's Council to bear the major responsibility for this disaster. He was stripped of the lands that had been given him as his fee for raising the army and fined 10,000 marks.[6]

He also founded Trinity Hospital, Pontefract and helped to suppress the Peasants' Revolt.[3]

Knolles' coat of arms decorates the postern tower of Bodiam Castle, Sussex. It was a statement of loyalty to Knolles by its builder, Edward Dalyngrigge who served under Knolles in a Free Company during the Hundred Years' War.[7]