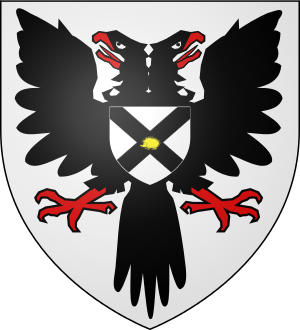 Coat of arms of Robert Maxwell, 1st Earl of Nithsdale[1]

Robert Maxwell, 1st Earl of Nithsdale (after 1586 – May 1646), was a Scottish nobleman. He succeeded his brother as 10th Lord Maxwell in 1613,[2] and was created Earl of Nithsdale in 1620. General of Scots in Danish service during the Thirty Years' War. A loyal supporter of Charles I and a prominent Catholic, he lost his titles and estates in 1645, dying on the Isle of Man in 1646.

The noble House of Maxwell had held the castle of Caerlaverock near Dumfries since the 13th century, and by the mid 16th century were the most powerful family in south-west Scotland. Robert Maxwell was the second son of John Maxwell, 8th Lord Maxwell (1553–1593) and his wife Elizabeth Douglas (d.1637), daughter of the 7th Earl of Angus. John Maxwell was killed at Dryfe Sands, near Lockerbie during a feud with the Johnstones of Annandale. His eldest son, John Maxwell, 9th Lord Maxwell, continued the feud and was executed in 1613 for the revenge killing of Sir James Johnstone. His lands and titles were forfeited, but in 1617 they were restored to Robert Maxwell by Parliament.[3]

In July 1619, Maxwell was appointed to the Privy Council of Scotland. On 28 October 1619, he married Elizabeth Beaumont, daughter of Sir Francis Beaumont and cousin of George Villiers, 1st Duke of Buckingham. Buckingham was the principal favourite of King James VI and I, and this family connection may have assisted Maxwell's progress.[3] On 29 August 1620, Maxwell was created Earl of Nithsdale by King James. This creation was held to be a confirmation of the earldom of Morton which had been granted to his father in 1581, but which was subsequently returned to the Douglas family. The following year the family lands were regranted to him by charter.[3] Soon after, he began work on a building project at Caerlaverock, creating a Renaissance mansion within the medieval castle walls. Known as the Nithsdale Lodging, this has been described as among "the most ambitious early classical domestic architecture in Scotland".[4] Completed in 1634, the facade bears carvings of his coat of arms (a double-headed eagle) and crest (a stag).

File:Caerlaverock4.jpg
The classical facade of the Nithsdale Lodging within Caerlaverock Castle

Following the accession of Charles I in 1625, Lord Nithsdale proved a loyal supporter. He was elected as General of the Scottish army levied to fight in Denmark during the Thirty Years' War. His staunch Catholicism was mentioned in his patent of promotion to Christian IV as not being problematic.[5] However, his fellow Scottish colonels disagreed, in particular Alexander Lindsay, Lord Spynie.[6] As a result, the Scots served in separate brigades within the Danish-Norwegian Army. As a Catholic, he was a natural ally of his own King, Charles I against the Presbyterian Scots. When Charles attempted to impose an Anglican prayer book in Scotland in the 1637, riots broke out, leading to the signing of the National Covenant. Relations between Charles and the Scots deteriorated further until the outbreak of the Bishops' Wars of 1639 and 1640, one of the triggers of the Wars of the Three Kingdoms. Despite his loyalty, Charles left Nithsdale to take care of himself, and in 1640 he found himself besieged at Caerlaverock by an army of Covenanters led by Lieutenant-Colonel John Home. Nithsdale, with a garrison of 200, held out for 13 weeks before surrendering.[7] In 1645 his lands and titles were declared forfeit, and he fled to the Isle of Man where he died the following year.[3]

Lord Nithsdale and his wife Elizabeth had three children:[3]