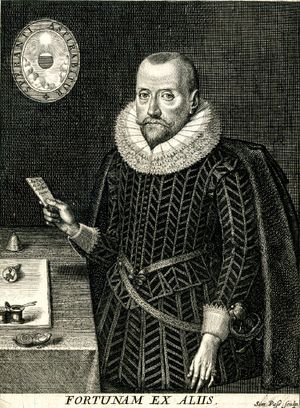 Robert Naunton was the son of Henry Naunton of Alderton, Suffolk, and Elizabeth Asheby of Hornsby, Leicestershire. According to Schreiber, the Nauntons were 'established members of the county gentry and had been so for well over two centuries'. Robert Naunton's grandfather, William Naunton, was trained as a lawyer and married Elizabeth Wingfield, the daughter Sir Anthony Wingfield, a trusted servant of Henry VIII. William Naunton was a Member of Parliament, and one of the principal officers of the King's brother-in-law, Charles Brandon, 1st Duke of Suffolk, and later of his widow, Katherine Willoughby, Duchess of Suffolk.[1] Robert Naunton's father, Henry, served as Master of Horse to the Dowager Duchess, while his maternal uncle, William Ashby,[2] was a member of the diplomatic service under Queen Elizabeth.[3][4]

He was educated at Norwich School and Trinity College, Cambridge, becoming a fellow of his college in 1585 and public orator of the university in 1594.[5][6] Robert Devereux, 2nd Earl of Essex, commissioned him to spend some time abroad, sending information about European affairs. On his return, Naunton was elected Member of Parliament for Helston at a by-election in 1606.

In 1614 Naunton was knighted and in 1616 became Master of Requests and later surveyor of the court of wards. In December 1617 his friend George Villiers, 1st Duke of Buckingham procured for him the position of Secretary of State on the condition of his making Christopher Villiers, Buckingham's brother, his heir, and during his lifetime Villiers gained from Naunton estates worth £500 a year.[7] In 1621 Naunton was elected MP for Cambridge University. His strong Protestant opinions led him to favour more active intervention by England in the interests of Frederick V, Elector Palatine, and more vigorous application of the laws against Roman Catholics. Naunton was censured after the Spanish ambassador, Gondomar, complained to King James I. Consequently, in January 1623, Naunton resigned as Secretary of State and was made master of the Court of Wards and Liveries.

Naunton died at Letheringham, Suffolk at the age of 71.

Naunton's account of Queen Elizabeth's reign was still in manuscript when he died. As Fragmenta regalia, written by Sir Robert Naunton, it was printed in 1641 and again in 1642, a revised edition Fragmenta Regalia, or Observations on the late Queen Elizabeth, her Times and Favourites, being issued in 1653. It was again published in 1824, and an edition edited by Edward Arber was brought out in 1870. It has also been printed in several collections and has been translated into French and Italian. There are several manuscript copies extant, and some of Naunton's letters are in the British Museum and in other collections. A modern critical edition was prepared by J. S. Cerovski and published in 1985.

He is the source for Elizabeth's rebuke to Robert Dudley, 1st Earl of Leicester " by God there shall be one mistress here and no master". He is also noted for his judgement of Henry VIII " He never spared a man in his anger or a woman in his lust". He was largely responsible for the claim that Sir John Perrot, his wife's grandfather, was Henry VIII's natural son.