Casey was best known for leading the pro-life wing of the Democratic Party, taking the lead in fighting Planned Parenthood v. Casey, a major Supreme Court case that upheld almost all the prohibitions on abortion that Casey signed into law. He championed unions, believed in government as a beneficent force, and supported gun rights.[4]

He was the father of Bob Casey, Jr., who is currently a U.S. Senator from Pennsylvania.

Casey was born in Jackson Heights, in the Queens borough of New York City, the son of Marie (née Cummings) and Alphonsus Liguori Casey. His family, of Irish descent, was originally from Scranton, Pennsylvania, but his parents moved to New York in order for his father, a devoutly Roman Catholic former coal miner who began working as a coal miner at age 10, to attend Fordham University School of Law.[5] The family returned to Scranton following Casey's birth.[6]

After attending Scranton Preparatory School, Casey turned down an offer to play for the Philadelphia Phillies in 1949, opting to go to college instead. He went to the College of the Holy Cross, where he was president of his senior class, on a basketball scholarship. He graduated with a Bachelor of Arts degree in 1953, and received his Juris Doctor from George Washington University in 1956.

A member of the Democratic Party, Casey was elected to the Pennsylvania State Senate in 1962. He first sought the office of Governor of Pennsylvania in 1966, losing the Democratic Party primary to Milton Shapp. Casey was the candidate of the party establishment, but the independently wealthy Shapp ran a successful insurgent campaign for the nomination. Casey tried on two other occasions without success, in 1970 (again losing to Shapp) and again in 1978 (losing to Pete Flaherty). Considered a moderate and despite growing frustration with Democratic Party policies, Casey rejected Republican offers to run for Governor on their ticket on two occasions. In 1968 and 1972 Casey was elected to the post of Auditor General of Pennsylvania.

Restricted from seeking another term as Auditor General of Pennsylvania, Casey declined to seek the office of Pennsylvania Treasurer in 1976. Instead, a county official who was also named Robert Casey won the Democratic primary and the general election, spending virtually no money and doing virtually no campaigning; voters merely assumed they were voting for the outgoing Auditor General.[citation needed] In 1980 the Republicans launched an extensive advertising campaign to clarify that "Casey isn't Casey," and the Democratic state treasurer was defeated for re-election, losing to R. Budd Dwyer. 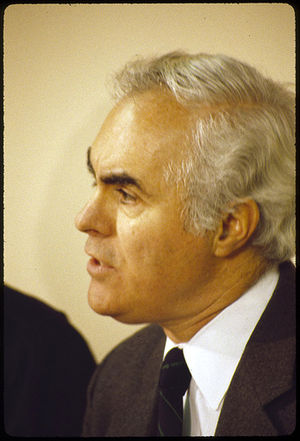 After a decade practicing law, Casey made a fourth bid for governor in 1986, billing himself as the "real Bob Casey" to distinguish himself and make light of the mistaken identity follies of the past. Dubbed "the three-time loss from Holy Cross" by detractors, Casey hired two then-generally unknown political strategists, James Carville and Paul Begala, to lead his campaign staff.

Unlike his three previous tries, Casey won the Democratic primary, defeating Philadelphia district attorney (and future Philadelphia Mayor and two term governor) Ed Rendell. He then faced Thornburgh's lieutenant governor, Bill Scranton in the general election. The race was considered too close to call until the week before the election, when the Casey campaign staff, led by Carville, launched the now infamous "guru ad" which attacked Scranton's practice of transcendental meditation. The ad campaign depicted Scranton as a "dope smoking hippie," complete with 1960s-era pictures of the lieutenant governor wearing long hair, a beard, and tie-dyed clothing. Casey defeated Scranton by a margin of 79,000 votes. 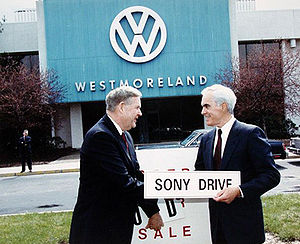 Inaugurated January 20, 1987, Casey was immediately confronted with several serious issues. Budd Dwyer, the State Treasurer who had been convicted on charges of accepting kickbacks, committed suicide at a televised press conference just two days into his term.

Casey brought what he called an "activist government" to Pennsylvania, expanding health care services for women, introducing reforms to the state's welfare system, and introducing an insurance program for uninsured children (which became a model for the successful SCHIP program later adopted nationwide). Casey also introduced a "capital for a day" program, where the state's official business was conducted from eighteen different communities throughout the state. Despite charges that his administration squandered a budget surplus and ran the state into record annual budget deficits, Casey remained popular with voters, easily winning re-election in 1990 against pro-choice Republican nominee Barbara Hafer. Polling data showed that abortion attitudes were a stronger predictor of vote choice than party affiliation.[7]

Governor Casey was well known as a staunch pro-life advocate. In 1989, Casey pushed through the legislature the "Pennsylvania Abortion Control Act," which placed limitations on abortion, including the notification of parents of minors, a twenty-four-hour waiting period, and a ban on partial-birth procedures except in cases of risk to the life of the mother. Planned Parenthood of Southeastern Pennsylvania sued, with Casey as the named defendant, asserting that the law violated Roe v. Wade. The case went to the United States Supreme Court in April, 1992. On June 29, 1992, in the case of Planned Parenthood v. Casey, the Supreme Court upheld all of Pennsylvania's restrictions except one (the requirement for spousal notification) allowing states to impose certain restrictions, but still affirming the right to an abortion found in Roe.[4]

Regarding capital punishment, Governor Casey signed 21 execution warrants, but none of those were carried out,[8] and Pennsylvania resumed executions under Casey's successor, Tom Ridge. Prosecutors have often criticized the slowness of the review process under Casey, and he signed only two death warrants after May 1991.[9]

On November 29, 1990, Governor Casey signed a bill that eliminated the electric chair as a method of executions in Pennsylvania and replaced it by lethal injection.[10]

Because he considered abortion a key social issue for the 1992 presidential election, Casey tried to get a speaking slot to give a minority plank on the topic at the 1992 Democratic National Convention. He was not given a speaking slot[11] and said in a series of news conferences the party was censoring his pro-life views even though he agreed with the party on nearly all other issues.[12]

Actions during the convention highlighted the hostility of the Casey-abortion issue. During the convention, Karen Ritter, a pro-choice Pennsylvania legislator, reportedly sold large buttons featuring a picture of Casey dressed as the Pope.[13] And after a speech by another pro-choice supporter from Pennsylvania, DNC supporters actually sent a camera crew in search of Casey in order to humiliate him.[14][15]

After the convention, convention organizers tried to say that Casey was not allowed to speak because he did not support the Democratic ticket.[4][15][16] By contrast, convention speaker Kathleen Brown had been falsely claimed not to have endorsed the ticket due to bitterness over her brother Jerry Brown's losing the nomination,[13] but in actuality Kathleen (along with the other Browns, except for Jerry) had come to support the Clinton ticket prior to the convention.[17]

Several pro-life Democrats such as John Breaux addressed the convention.[13] After the convention, Casey went on vacation rather than campaign for Clinton in Pennsylvania, which was a key swing state. He also refused to say whether he would campaign for the Democratic nominee, though he told the New York Times, "I support the ticket. Period."[18] Several pro-life Democrats spoke at the convention, but they did not focus their remarks on their opposition to abortion, and the issue was not debated the way that Casey had wanted.[15]

On April 4, 1991, Governor Casey was faced with filling a vacancy in the Senate when Republican US Senator John Heinz died in a plane crash. After briefly considering appointing Chrysler Corporation Chairman Lee Iacocca, an Allentown native, Casey settled on state Secretary of Labor and Industry, and former Kennedy functionary Harris Wofford (despite private fears that he was too liberal for rural Pennsylvania voters).[12] According to former Casey press secretary Vince Carocci, the Governor insisted on two conditions:

First, that Wofford would bring Carville and company on to manage his campaign for election; second, when the issue of abortion came up as it inevitably would, Harris would proclaim his support for the Pennsylvania Abortion Control Act, which already had its constitutionality upheld by the U.S. Supreme Court.[12]

With those assurances in hand, Governor Casey appointed Wofford to the Senate, and then vigorously supported him in Wofford's uphill fight to remain in the Senate against former Pennsylvania Governor and U.S. Attorney General Dick Thornburgh in the special election held that fall. Thanks in large part to Casey's fundraising prowess and Carville's political ability, Senator Wofford scored an upset victory over Thornburgh.

However, Casey and Wofford came into conflict during the early Clinton administration, when Wofford refused a personal plea by Casey to support an amendment similar to a provision in Casey's Pennsylvania Abortion Control Act. Casey made it very clear that if Wofford opposed the amendment, the Governor would withhold his support in Wofford's next Senate election. Wofford supported the amendment, and was defeated in the 1994 election by upstart conservative Congressman Rick Santorum.[12]

The footnote to this story came years after Governor Casey's death. By 2005, the Governor's son, Bob Casey, Jr., had served two terms as Auditor General and had been elected State Treasurer the year before, crushing his opponent with over 3.3 million votes. Despite the younger Casey's pro-life views, National Democrats, led by Chuck Schumer, heavily recruited him to run in the 2006 election against Santorum, by now the number-three Republican in the Senate. Casey went on to win a landslide victory over Santorum.[19]

During his second term, Casey was diagnosed with hereditary amyloidosis, an inherited condition characterized by the deposition of insoluble proteins in organs and tissues.[20] Though rare, the disease had also claimed the lives of Pittsburgh Mayor Richard Caliguiri and Erie Mayor Louis Tullio in 1988 and 1990, respectively. To combat the disease, he underwent an extremely rare heart-liver transplant on the morning of June 14, 1993 at the University of Pittsburgh Medical Center. The announcement of Casey's disease was made just days before he underwent the transplant, and as a result many accused him of receiving preferential treatment with respect to donor waiting lists.

Before undergoing the operation, he transferred executive authority to Lieutenant Governor Mark Singel, marking the first time Pennsylvania was under the leadership of an acting governor. Casey resumed his duties on December 13, 1993, almost six months to the day after he underwent the operation.

Prohibited from seeking a third term, Bob Casey left office on January 17, 1995 but contemplated a run for President to oppose Bill Clinton in the 1996 Democratic primaries; he declined due to failing health.[21][22]

Despite the transplants, Casey continued to suffer long-term effects of his disease, to which he finally succumbed on May 30, 2000, at the age of 68. His survivors were his wife of fifty years, Ellen (née Harding); his eight children, Margaret, Mary Ellen, Kathleen, Bob, Jr., Chris, Erin, Patrick and Matt; numerous grandchildren; and his brother John.[5]

Casey's oldest son, Bob Jr., was, like his father, elected to two terms as Pennsylvania's Auditor General. In 2002, he sought the Governor's office, but was defeated in the Democratic primary by Ed Rendell. In 2004, he was elected State Treasurer, and in a 2006 Senate race, he defeated incumbent Republican Senator Rick Santorum.