Runcie was born and spent his early life in Great Crosby, Lancashire, to middle-class and rather non-religious parents. He initially attended St Luke's Church, Crosby (where he was confirmed in 1936), before switching to the Anglo-Catholic St Faith's Church about a mile down the road. He was educated at Merchant Taylors' School, Crosby, before going up to Brasenose College, Oxford.

He earned a commission in the Scots Guards during World War II, serving as a tank commander and earning the Military Cross for two feats of bravery in March 1945: he rescued one of his men from a crippled tank under heavy enemy fire, and the next day took his own tank into an exceptionally exposed position in order to knock out three anti-tank guns. As a result, he is unique among modern Archbishops of Canterbury in having killed fellow human beings. In May 1945, he was among the first British troops to enter Bergen-Belsen concentration camp.

After the surrender of Nazi Germany, Runcie served with the occupying forces in Cologne and then with the boundary commission dealing with the future status of the Free Territory of Trieste.

On his return to Oxford, he surprised many by taking first class honours in Greats. He was a member of both Tory and Socialist societies at Oxford, and through that he had his first dealings with the young Margaret Thatcher (then Margaret Roberts), a relationship which was to prove pivotal during his archiepiscopate.

Runcie studied for ordination at Westcott House, Cambridge, where he received a diploma, rather than a second bachelor's degree in theology. He was ordained in the Diocese of Newcastle in 1950 to serve as a curate in the parish of All Saints in the wealthy Newcastle upon Tyne suburb of Gosforth, then a rapidly growing suburban area. Rather than the conventional minimum three-year curacy, after only two years Runcie was invited to return to Westcott House as Chaplain and, later, Vice-Principal. In 1956 he was elected Fellow and Dean of Trinity Hall, Cambridge, where he would meet his future wife, Rosalind, the daughter of the college bursar.

In 1960, he returned to the world of the theological college, becoming Principal of Cuddesdon College, near Oxford, where he spent ten years and transformed what had been a rather monastic and traditionally Anglo-Catholic institution into a stronghold of the liberal Catholic wing of the Church of England. In this period, his name became more and more strongly spoken of as a future bishop, and speculation was confirmed when he was appointed Bishop of St Albans in 1970.

Like Gosforth in the 1950s, the Diocese of St Albans was a booming suburban area, popular with families moving out of a depopulating London. As well as diocesan work, he worked with broadcasters as Chairman of the Central Religious Advisory Committee, and was appointed Chairman of the joint Anglican-Orthodox Commission.

Runcie was selected as Archbishop of Canterbury in 1979. Ironically, in view of his future relations with the Conservative government, there is evidence that Runcie was actually the second choice of the Crown Appointments Commission, the first choice, Hugh Montefiore, having proven politically unacceptable to the then newly elected Conservative government.[citation needed] He was installed as archbishop on 25 March 1980.[1]

During his time as Archbishop of Canterbury he witnessed a breaking down of traditionally convivial relations between the Conservative Party and the Church of England, which was habitually described as "the Tory party at prayer". The breakdown was due mainly to the church's pronouncements on political matters and Margaret Thatcher's support for the ethos of individualism and wealth creation as well as her claim that "there is no such thing as society",[2] which some Anglicans thought was uncaring and anti-Christian.[citation needed]

In 1981, Runcie officiated at the marriage of Charles, Prince of Wales, to Lady Diana Spencer, despite suspecting privately that they were ill-suited and that their marriage would not last.[citation needed]

On 11 March 1982, Runcie attempted to give a speech in St Nicholas's Parish Church in Liverpool but was shouted down by people angry about the Pope's prospective visit to Britain. They shouted that Runcie was a traitor, a liar and was selling Anglicanism down the road to Rome. After interruptions of the service, Runcie asked the congregation to heed chapter five of St Matthew's Gospel (the Sermon on the Mount), telling them "For they are the words of Jesus himself". The crowd shouted back: "You had better read your Bible yourself. You are a traitor and a Judas." Outside, demonstrators held placards with the inscriptions "Rome Rules Runcie", "Our Faith Our Bible", "Revive Reformation", "Calvary not Popery" and "Jesus What More". Afterwards, Runcie said: "I am trying my best to find forgiveness for them, but it is very upsetting."[3] Cardinal Basil Hume called the demonstration "particularly abhorrent and a scandal".[4]

On 17 March 1982, Runcie gave a speech to the National Society for the Promotion of Christianity in which he said that Christianity should play a crucial part in the religious education of all pupils, even if they were non-Christian: "While recognising that a truly pluralistic society should not merely tolerate diversity but value and nurture it, I must also express the fear that at times we seem tempted to sacrifice too much of our native Christian tradition on the altar of multi-culturalism."[5]

In a dramatic gesture of goodwill, he knelt in prayer with Pope John Paul II in Canterbury Cathedral during John Paul's visit to Great Britain in 1982.

On 18 April 1982, Runcie said in an interview with London Weekend Television that he hoped the Church of England and the Roman Catholic Church would be unified by the year 2000: "I dream of unity with Rome, and with the great Reform tradition and with the orthodox, by the end of the century, but we will have to get a move on, certainly, if that is our target. I don't see why we should not have that target." Runcie said of the office of Pope: "There is advantage in having a central focus of affection, even a central spokesman to articulate what the churches in different parts of the world are thinking. I think Anglicans recognise that there is value in that sort of concept". He also played down the Queen's role as Supreme Governor of the Church of England: "Our entanglement with Crown and Parliament is not very considerable now. The Queen's position in the life of our church is very much a symbolic position. She is, as it were, a chief lay person in our church rather than somebody who has a decisive voice in all our appointments."[6]

In 1985, there was friction between the Church of England and members of the Conservative government, in particular Norman Tebbit, over a church report, "Faith in the City", which criticised the government's handling of social problems in British inner-city areas. Tebbit became a strong supporter of the disestablishment of the Church of England, claiming that institutions affiliated to the British state should not express what he saw as overtly partisan political views.

Much of the middle period of Runcie's archiepiscopate was taken up with the tribulations of two men who had been close to him: the suicide of Gareth Bennett and the kidnapping of Terry Waite.

When Runcie visited the Pope John Paul II in 1989, he set out to reconcile the Church of England with the Church of Rome. Runcie advocated the Papacy as having a "primacy of honour" rather than "primacy of jurisdiction" over the Anglican churches, a proposal consistent with the report of the Anglican Roman Catholic International Commission. The Pope did not go along with this, however, claiming that the Papacy already has primacy of jurisdiction over all other churches regardless of whether or not this is officially recognised and also that the doctrines of the Roman Catholic Church would not change to accommodate Runcie's proposals.[citation needed]

In internal Anglican matters, much of Runcie’s time as archbishop was taken up with the debate over whether to proceed with the ordination of women in the Church of England as well as the fallout from the ordination of women as priests and bishops in other parts of the Anglican Communion. Runcie's position on the matter had been described as "nailing his colours firmly to the fence"[citation needed] – his liberal theology conflicting with his instinctive conservatism. 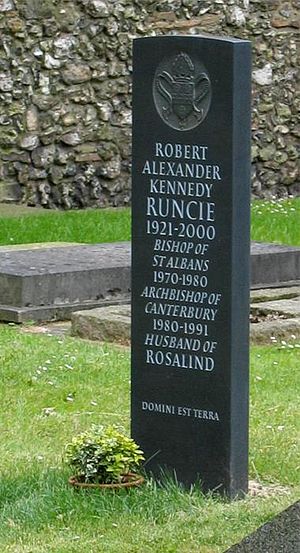 The church's attitude to homosexuality was also a divisive issue during this period, although it did not assume the crisis proportions it would in the late 1990s and early 2000s. In public Runcie stuck to official Church of England policy as set out in the publication Issues in Human Sexuality, that homosexual practice was not ideal for lay people and unacceptable for clergy.

Runcie retired as Archbishop of Canterbury effective 31 January 1991.[7] On 1 February, he was created a life peer – gazetted on 7 February as Baron Runcie, of Cuddesdon in the County of Oxfordshire[8] – enabling him to immediately re-enter the House of Lords where he had previously sat as a Lord Spiritual. He died of cancer in St Albans in 2000,[9] and is buried in the grounds of St Albans Cathedral.

Runcie's wife, Rosalind, whom he married on 5 September 1957, was well known as a pianist. They had two children: James Runcie, a novelist, and Rebecca Runcie, as well as four grandchildren: Rosie, Charlotte, Matthew and Edward. Rosalind Runcie died on 12 January 2012.

In the postscript of Humphrey Carpenter's biography:[10]

I have done my best to die before this book is published. It now seems possible that I may not succeed.