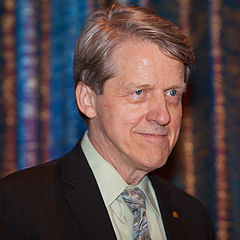 Robert James "Bob" Shiller (born March 29, 1946)[3] is an American Nobel Laureate, economist, academic, and best-selling author. He currently serves as a Sterling Professor of Economics at Yale University and is a fellow at the Yale School of Management's International Center for Finance.[4] Shiller has been a research associate of the National Bureau of Economic Research (NBER) since 1980, was vice president of the American Economic Association in 2005, and president of the Eastern Economic Association for 2006–2007. He is also the co‑founder and chief economist of the investment management firm MacroMarkets LLC.

Shiller is ranked among the 100 most influential economists of the world.[5] Eugene Fama, Lars Peter Hansen and Shiller jointly received the 2013 Nobel Memorial Prize in Economic Sciences, “for their empirical analysis of asset prices”.[6][7]

Shiller was born in Detroit, Michigan, the son of Ruth R. (née Radsville) and Benjamin Peter Shiller, an engineer.[8] He is of Lithuanian descent.[9] He is married to Virginia Marie (Faulstich), a psychologist, and has two children.[8] He was raised as a Methodist.[10]

Shiller studied at Kalamazoo College and the University of Michigan where he received his B.A. degree in 1967.[11] He received the S.M. degree from the Massachusetts Institute of Technology (MIT) in 1968, and his Ph.D. from MIT in 1972 with thesis entitled Rational expectations and the structure of interest rates under the supervision of Franco Modigliani.[2] He has taught at Yale since 1982 and previously held faculty positions at the Wharton School of the University of Pennsylvania and the University of Minnesota, also giving frequent lectures at the London School of Economics. He has written on economic topics that range from behavioral finance to real estate to risk management, and has been co-organizer of NBER workshops on behavioral finance with Richard Thaler since 1991. His book Macro Markets won TIAA-CREF's first annual Paul A. Samuelson Award. He currently publishes a syndicated column.

In 1981 Shiller published an article in The American Economic Review titled "Do stock prices move too much to be justified by subsequent changes in dividends?"[12] in which he challenged the efficient-market hypothesis, which was the dominant view in the economics profession at the time. Shiller argued that in a rational stock market, investors would base stock prices on the expected receipt of future dividends, discounted to a present value. He examined the performance of the U.S. stock market since the 1920s, and considered the kinds of expectations of future dividends and discount rates that could justify the wide range of variation experienced in the stock market. Shiller concluded that the volatility of the stock market was greater than could plausibly be explained by any rational view of the future.

The behavioral finance school gained new credibility following the October 1987 stock market crash. Shiller's work included survey research that asked investors and stock traders what motivated them to make trades; the results further bolstered his hypothesis that these decisions are often driven by emotion instead of rational calculation. Much of this survey data has been gathered continuously since 1989.[13] 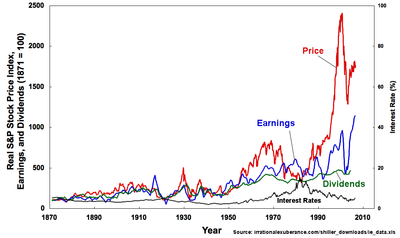 Robert Shiller's plot of the S&P Composite Real Price Index, Earnings, Dividends, and Interest Rates, from Irrational Exuberance, 2d ed.[14] In the preface to this edition, Shiller warns that "[t]he stock market has not come down to historical levels: the price-earnings ratio as I define it in this book is still, at this writing [2005], in the mid‑20s, far higher than the historical average. ... People still place too much confidence in the markets and have too strong a belief that paying attention to the gyrations in their investments will someday make them rich, and so they do not make conservative preparations for possible bad outcomes." 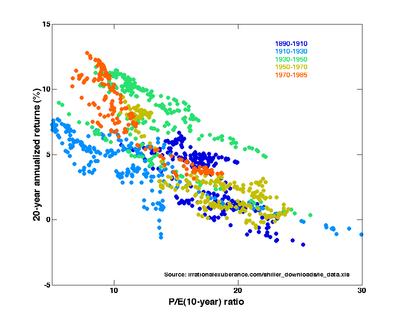 Price-earnings ratios as a predictor of twenty-year returns based on the plot by Robert Shiller (Figure 10.1,[14] source). The horizontal axis shows the real price-earnings ratio of the S&P Composite Stock Price Index as computed in Irrational Exuberance (inflation adjusted price divided by the prior ten-year mean of inflation-adjusted earnings). The vertical axis shows the geometric average real annual return on investing in the S&P Composite Stock Price Index, reinvesting dividends, and selling twenty years later. Data from different twenty-year periods is color-coded as shown in the key. See also ten-year returns. Shiller states that this plot "confirms that long-term investors – investors who commit their money to an investment for ten full years – did do well when prices were low relative to earnings at the beginning of the ten years. Long-term investors would be well advised, individually, to lower their exposure to the stock market when it is high, as it has been recently, and get into the market when it is low."[14]

In 1991 he formed Case Shiller Weiss with economists Karl Case and Allan Weiss who served as the CEO from inception to the sale to Fiserv.[15] The company produced a repeat-sales index using home sales prices data from across the nation, studying home pricing trends. The index was developed by Shiller and Case when Case was studying unsustainable house pricing booms in Boston and Shiller was studying the behavioral aspects of economic bubbles.[15] The repeat-sales index developed by Case and Shiller was later acquired and further developed by Fiserv and Standard & Poor, creating the Case-Shiller index.[15]

His book Irrational Exuberance (2000) – a New York Times bestseller – warned that the stock market had become a bubble in March 2000 (the very height of the market top) which could lead to a sharp decline.

On CNBC's "How to Profit from the Real Estate Boom" in 2005, he noted that housing price rises could not outstrip inflation in the long term because, except for land restricted sites, house prices would tend toward building costs plus normal economic profit. Co‑panelist David Lereah disagreed. In February, Lereah had put out his book Are You Missing the Real Estate Boom? signaling the market top for housing prices. While Shiller repeated his precise timing again for another market bubble, because the general level of nationwide residential real estate prices do not reveal themselves until after a lag of about one year, people did not believe Shiller had called another top until late 2006 and early 2007.

In 2003 Shiller co-authored a Brookings Institution paper called "Is There a Bubble in the Housing Market?". Shiller subsequently refined his position in the 2nd edition of Irrational Exuberance (2005), acknowledging that “further rises in the [stock and housing] markets could lead, eventually, to even more significant declines... A long-run consequence could be a decline in consumer and business confidence, and another, possibly worldwide, recession. This extreme outcome ... is not inevitable, but it is a much more serious risk than is widely acknowledged.” Writing in The Wall Street Journal in August 2006, Shiller again warned that "there is significant risk of a very bad period, with slow sales, slim commissions, falling prices, rising default and foreclosures, serious trouble in financial markets, and a possible recession sooner than most of us expected.”[16] In September 2007, almost exactly one year before the collapse of Lehman Brothers, Shiller wrote an article in which he predicted an imminent collapse in the U.S. housing market, and subsequent financial panic.[17]

Robert Shiller was awarded the Deutsche Bank Prize in Financial Economics in 2009 for his pioneering research in the field of financial economics, relating to the dynamics of asset prices, such as fixed income, equities, and real estate, and their metrics. His work has been influential in the development of the theory as well as its implications for practice and policy making. His contributions on risk sharing, financial market volatility, bubbles and crises, have received widespread attention among academics, practitioners, and policymakers alike.[18] In 2010, he was named by Foreign Policy magazine to its list of top global thinkers.[19]

In 2010 Shiller supported the idea that to fix the financial and banking systems, in order to avoid future financial crisis, banks need to issue a new kind of debt, known as contingent capital, that automatically converts into equity if the regulators determine that there is a systemic national financial crisis, and if the bank is simultaneously in violation of capital-adequacy.[20]

In 2011 he made the Bloomberg 50 most influential people in global finance.[21] In 2012, Thomson Reuters named him a contender for that year's Nobel Prize in Economics, citing his "pioneering contributions to financial market volatility and the dynamics of asset prices".[22]

On October 14, 2013, it was announced that Shiller had become a recipient of the 2013 Nobel Prize in Economics alongside Eugene Fama and Lars Peter Hansen.[23]

In interviews in June 2015, Shiller warned of the potential of a stockmarket crash.[24] In August 2015, after a flash crash in individual stocks, he continued to see bubbly conditions in stocks, bonds, and housing.[25]