Robert St Lawrence, 3rd Baron Howth (born c.1435 – died before 1488) was a leading statesman in 15th-century Ireland who held the office of Lord Chancellor of Ireland, and was through marriage a close connection of the Tudor dynasty.

He was born about 1435, eldest son of Christopher St Lawrence, 2nd Baron Howth. There is some dispute about the identity of his mother: some sources name her as Anne Plunkett, others as Elizabeth Bermingham. He succeeded to the title in 1464 or 1465.

O'Flanagan calls him "a nobleman of considerable abilities, who filled several offices connected with the Government of Ireland." [1]

He was High Sheriff of County Dublin in 1456, Chancellor of the Exchequer of Ireland in 1478 and Clerk of the Court of Common Pleas (Ireland). In 1474 he was chosen to be one of the thirteen Knights of the Brotherhood of Saint George, who were charged with defending the Pale against invasion by neighbouring Gaelic clans, and more generally with keeping the peace.

In 1483 Richard III chose him to be Lord Chancellor of Ireland, despite opposition from Gerald FitzGerald, 8th Earl of Kildare, who was then almost all-powerful in Ireland. His continued employment by the Yorkist kings after his second marriage in 1478 is perhaps surprising, given that his second wife Joan Beaufort was a close relative of Henry Tudor, who was to overthrow the House of York in 1485. In any event his tenure as Lord Chancellor was short, ending either with his removal or his death later in 1483, although some sources place his death as late as 1487.[2]

Robert married firstly Alice White, daughter of Nicholas White of Killester, and by marriage acquired the manor of Killester. In 1478 he made a second and politically significant marriage to Joan Beaufort, daughter of Edmund Beaufort, 2nd Duke of Somerset. Somerset's seemingly remote claim to the English Crown as the legal heir of John of Gaunt was vindicated by his cousin Margaret Beaufort"s son Henry VII. The St. Lawrence family, unlike most of the Anglo-Irish nobility, were reliable supporters of the Tudor dynasty. 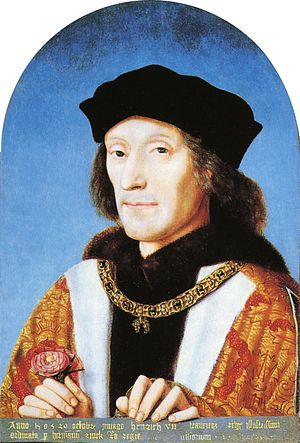 King Henry VII of England- Lord Howth was his cousin by marriage, and a reliable supporter of the Tudor dynasty.

He had six children:

Some sources state that his second marriage was childless, but his eldest son Nicholas, who was born about 1460, must have been about twenty years older than his second son Thomas, who was at law school in 1503 and survived until 1553, so it is likely that Thomas and his younger brothers were children of their father's second marriage. Joan remarried Sir Richard Fry and died in 1518.