Robert Michael Urich (December 19, 1946 – April 16, 2002) was an American film, television and stage actor and television producer. Over the course of his 30-year career, he starred in a record 15 television series.[1]

Urich began his career in television in the early 1970s. After guest stints and roles in short-lived television series, he won a costarring role in the action/crime drama series S.W.A.T. in 1975. In 1976, he landed the role of Dan Tanna in the crime drama series Vega$. It aired on ABC from 1978 to 1981, and earned him two Golden Globe Award nominations. In addition to his work in television, he also starred in several feature films, including Magnum Force (1973), The Ice Pirates (1984), and Turk 182 (1985). From 1985 to 1988, he portrayed the title role in the detective television series Spenser: For Hire, based on Robert B. Parker's popular series of mystery novels. In 1988, he began hosting the documentary series National Geographic Explorer. He won a CableACE Award for his work on the series. He was also awarded a Golden Boot Award for his work in Western television series and films.

In 1996, Urich starred in the The Lazarus Man. It was canceled shortly after he announced that he was diagnosed with synovial cell sarcoma, a rare cancer, in July 1996. He sought treatment for his illness while continuing his career and also worked to raise money for cancer research. He was declared cancer free in 1998 and returned to television in the UPN series, The Love Boat: The Next Wave. In 2000, he made his Broadway debut as Billy Flynn in the musical Chicago.

Urich was born in Toronto, Ohio, the son of Cecilia Monica (Halpate) and John Paul Urich.[2] He was of Rusyn and Slovak extraction and raised Byzantine Catholic[3] and Roman Catholic.[4]

Urich attended Florida State University on a football scholarship, and was a member of the Lambda Chi Alpha fraternity. In 1968, he earned a bachelor's degree in Radio and Television Communications. He went on to Michigan State University after working in Ohio to earn a master's degree in Broadcast Research and Management. He then worked as a salesman in Chicago at WGN-TV. He later worked as a weatherman.[5]

After appearing in a production of The Rainmaker with Burt Reynolds, Urich decided to pursue acting full-time after Reynolds encouraged him to move to Los Angeles.[6]

Urich made his television debut in a guest starring role in The F.B.I., in 1972. The following year, he won a lead role in Bob & Carol & Ted & Alice. It was an adaptation of the 1969 film of the same name. It struggled in the ratings and was canceled after six episodes. He made his film debut later that same year opposite Clint Eastwood in the Dirty Harry film Magnum Force playing a vigilante motorcycle-patrol police officer. 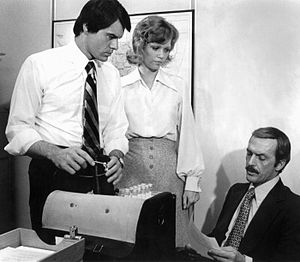 Urich, Maureen Reagan, and Jack Hogan pose for a 1974 publicity photo for the TV show Vector.

In 1975, Urich was cast in the action/crime drama series S.W.A.T.. According to the executive producer Aaron Spelling, Burt Reynolds convinced Spelling to allow Urich to read for the part. Spelling was impressed with his reading and cast him in the role of "Officer Jim Street".[7] A mid-season replacement, it earned high enough ratings to warrant a second season. However, it was canceled in 1976 due to its violent content.[8]

Urich's next role was on the sitcom Soap as Peter the Tennis Player in 1977. That same year he was cast as Paul Thurston, a good-looking, ego driven talk show host in the Bewitched spin-off series Tabitha, starring Lisa Hartman. Its rating were initially strong, but schedule changes caused ratings to drop and it was canceled in 1978 after 13 episodes.[9] Shortly after, he was cast in another Aaron Spelling produced series Vega$. He portrayed the series' lead character, Dan Tanna, a private detective who solves crimes in Las Vegas. It was a hit for ABC and he received two Golden Globe Award nominations for his work on it. By the third season, however, he had grown tired of the role and complained about the declining quality of the writing. Ratings had also declined and it was canceled in 1981. Shortly after, he signed with Metro-Goldwyn-Mayer and decided to focus on his film career. His first film for them was Endangered Species (1982), a science fiction one directed by Alan Rudolph.[10]

Shortly after filming Endangered Species, Urich signed on to star in another series Gavilan. He starred as the title character who was a former CIA agent turned oceanographer. It was canceled after seven episodes. In 1984, he starred in two more films The Ice Pirates, and Wes Craven's Invitation to Hell. The following year, Urich co-starred in Turk 182. It was a box office failure and he was nominated for Golden Raspberry Award.

In 1985, Urich returned to episodic television as the title character in Spenser: For Hire. It was another hit for Urich and aired for three seasons. He reprised the role in several television films after it was canceled: Spenser: Ceremony (1993), Spenser: Pale Kings and Princes (1994), Spenser: The Judas Goat (1994), and Spenser: A Savage Place (1995). In 1988, he began hosting the documentary series National Geographic Explorer. He won a CableACE Award for his work on the series. In 1989, he portrayed Jake Spoon, in the acclaimed television miniseries Lonesome Dove, a role for which he received many positive reviews.

In the 1990s, Urich mainly appeared in television films and several short-lived television series. From 1990 to 1991, he starred in the sitcom American Dreamer. The following year, he starred in Crossroads, a drama series that aired on ABC for ten episodes. In 1993, he and Faye Dunaway starred in the sitcom It Had to Be You. It was critically panned and canceled after four episodes. In 1995, he narrated an extremely rare one-night showing of a Disney television documentary called "Alien Encounters: From New Tomorrowland". It has never been shown again. In 1996, he starred in the TNT western series The Lazarus Man. It earned strong enough ratings to be picked up for a second season but shortly after it was renewed, he announced he had been diagnosed with synovial cell sarcoma. Its production company, Castle Rock Entertainment, opted to cancel it due to that.[11] In 1999, he commented on their choice to do so, "There's really a law against what they did. They found out I had cancer, and they just canceled the show. They didn't ask the doctors if I could work. They didn't ask if I could go back to work."[12] In 2000, he sued them for breach of contract.[13] The lawsuit was later settled with both parties agreeing not to publicly disclose the terms of the settlement.[14]

While undergoing cancer treatments, Urich hosted the medical documentary series Vital Signs in 1997 and the PBS series Boatworks.[15] After a year of treatment, he was declared cancer-free and returned to television in 1998 as Captain Jim Kennedy III in The Love Boat: The Next Wave. It aired on UPN for two seasons. In 2000, he made his Broadway debut as Billy Flynn in the musical Chicago.[16] and also was in the North American tour of the musical, in 1999 and in 2000.[17][18][19] The next year, he costarred in Emeril, a sitcom starring celebrity chef Emeril Lagasse. While it was critically panned, he received good notices for his work on it. It would be his last role in a television series.

Urich's final television film, Night of the Wolf, aired on Animal Planet the night before his death.[14]

Urich's first marriage was to actress Barbara Rucker in 1968. They divorced in 1974. He married actress Heather Menzies in 1975. They adopted three children, Ryan, Emily, and Allison. They remained married until his death in 2002.[4]

In July 1996, Urich announced he had been diagnosed with synovial cell sarcoma, a rare form of cancer that attacks soft tissue. He continued working while undergoing treatment for his illness and also became an advocate for finding a cure for cancer. He won an award from the John Wayne Cancer Institute and the Gilda Radner Courage Award for his work raising cancer awareness.[12] He and Menzies also founded the Urich Fund for the University of Michigan Comprehensive Cancer Center to raise funds for cancer research. He also donated the $125,000 he won when he appeared on an episode of Who Wants to Be a Millionaire.[14] He was declared cancer free in 1998. That same year, he was named the national spokesperson for the American Cancer Society.[5]

In November 2001, Urich revealed in an interview that his doctors had discovered lumps in his body but "a wonder drug had cleared them up".[14] The week before his death, he was hospitalized at Los Robles Hospital & Medical Center in Thousand Oaks for breathing problems. He died there on April 16, 2002.[20][21] His funeral mass was offered on April 19 at St. Charles Borromeo Church in North Hollywood.[5] He was cremated and his ashes were buried on the grounds of his family's vacation home in Prince Edward County, Ontario, Canada.

Before his death, Urich and Menzies established the Robert and Heather Urich Fund for Sarcoma Research at the University of Michigan Comprehensive Cancer Center. She has also battled cancer and is an ovarian cancer survivor. Menzies continues to work for the center.

Urich's hometown of Toronto, Ohio, named the Robert Urich Interchange in his honor. It connects the town to Ohio State Route 7.

Before his death, Urich and Menzies helped to raise money for the Eccles Performing Arts Centers at the Park City High School in Park City, UT. After his death, the school established the Robert Urich Scholarship fund in his honor.[22]

For his contribution to the television industry, Urich has a star on the Hollywood Walk of Fame located at 7083 Hollywood Blvd.[1] He is the only person with a surname starting with the letter U on there.[23][24][25]