Robert Walter Weir (June 18, 1803 – May 1, 1889) was an American artist and educator. He is considered a painter of the Hudson River School.[1] Weir was elected to the National Academy of Design in 1829, and an instructor at the United States Military Academy. His best-known works are Embarkation of the Pilgrims (in the United States Capitol rotunda at Washington, D.C.) and Landing of Hendrik Hudson. 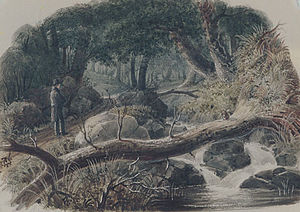 The Entrance To A Wood (1836), watercolor and graphite on paper, Metropolitan Museum of Art, Borough of Manhattan, New York City, NY

Robert Weir was born to Robert and Mary Katherine (Brinkley) Weir on June 18, 1803 in New York City, New York (it's commonly reported that he was born in New Rochelle, New York, however the family did not move to New Rochelle until 1811[2]). Weir never graduated from college, and in 1821, at the age of 18, he left a job as a mercantile clerk to pursue painting. He studied art in New York City from 1822 to 1824, teaching himself drawing and painting, before departing in 1824 to study in Italy.[3] He remained in Florence from 1824 to 1825, and in Rome from 1825 to 1827, during which time he studied the works of Michelangelo, Raphael, and other Italian masters of the Renaissance. Weir returned to New York in 1827 to care for a sick friend. He remained in New York until 1834 and became an integral part of its artistic community. He was then appointed as Teacher of Drawing, later Professor of Drawing, at the United States Military Academy at West Point, New York.[4]

Replacing the late Thomas Grimbrede, Weir was the fifth artist to hold the position of art instructor at the academy.[5] During his forty-two years (1834–1876) in this post, he instructed many of the future commanders of the American Civil War. Among his notable students at West Point were James Abbott McNeill Whistler and Seth Eastman. He also developed a special relationship with Ulysses S. Grant.[4] He died in New York City on May 1, 1889.[5] 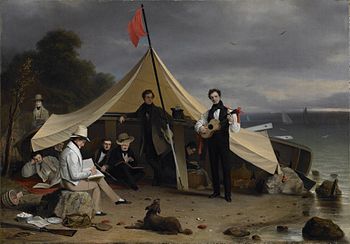 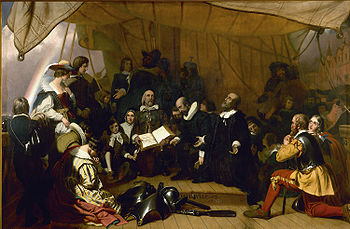 Weir was considered part of the Hudson River school of American art. One of his best known paintings is the The Embarkation of the Pilgrims, which hangs in the United States Capitol Rotunda. He was commissioned by the United States Congress in 1837 and the painting was placed in the rotunda in December 1843.[8] His canvases deal principally with historical subjects. He also painted a watercolor entitled Last Communion of Henry Clay, as well as several portraits.