He was born the son of a cotton-bleacher, in Bolton, England. He trained as an engineer and draughtsman, and attended the Mechanics Institute in Manchester.

His first professional employment was at a shipyard in Toulon, France, for Philip Taylor & Sons,[2] and then as a consultant engineer in Milan, Italy. He then moved to Trieste, on the Adriatic coast of Austria.

Whitehead's work in Trieste was noticed by the owners of Fonderia Metalli, a metal foundry in the nearby city of Fiume (today Rijeka, Croatia). In 1856, Whitehead became manager of the company, and changed its name to Stabilimento Tecnico di Fiume (STF). STF produced marine steam boilers and engines, which were the most modern products of that era. The Austrian Navy was a customer.

In the early 1860s, Whitehead met engineer Giovanni Luppis, who had recently retired to Trieste from the Austrian Navy. Luppis had produced the first prototypes of a self-propelled torpedo in 1860, which he called the "coast saviour" (Italian: Salvacoste) (Croatian: Spasilac obale). Luppis' device was a low-profile surface boat, propelled by compressed air, and controlled by ropes from the land. Whitehead and Luppis formed a partnership to perfect the torpedo as an effective weapon. 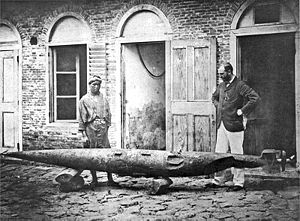 Robert Whitehead (right) and his son (left) with a battered test torpedo in Fiume, Austria-Hungary c.1875

Whitehead's initial torpedo experiments were conducted with the help of his 12-year-old son, John, and a workman, Annibale Ploech. They discarded Luppis' concept of shore launch and control for an unguided weapon launched from a ship on a straight line at the target which became known as the Whitehead torpedo.

This resulted in Minenschiff, the first self-propelled (locomotive) torpedo, officially presented to the Austrian Imperial Naval commission on 21 December 1866. The commission was impressed and the Austrian gunboat Gemse was adapted for launching torpedoes at the Schiavon shipyard in Fiume. The ship was equipped with a launching barrel, which was Whitehead's invention. More than 50 launch trials were performed in front of the factory, in Fiume harbour bay. Gemse's commander, Frigate Lieutenant Count Georg Anton von Hoyos, later married Whitehead's daughter Alice.

By 1870, Whitehead had managed to increase the torpedo's speed to 7 knots (13 km/h) and it could hit a target 700 yards (640 m) away. The torpedo was driven by a small reciprocating engine run by compressed air.

Whitehead fiercely guarded his trade secrets, employees were often sworn to secrecy about the guidance mechanisms employed in his torpedoes.

Though the product was promising, the torpedo did not produce profits for Stabilimento Tecnico di Fiume, which went bankrupt in 1873. In 1875, Whitehead reorganized the company as Torpedo-Fabrik von Robert Whitehead – later Whitehead & Co., Societa in Azioni.

When Whitehead retired, the Whitehead family sold the company to two large British armaments companies, Vickers and Armstrong-Whitworth. Thus the company remained under British control until the First World War.

Use of the Torpedo 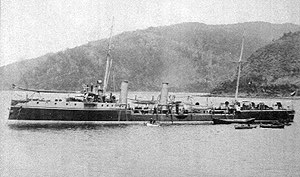 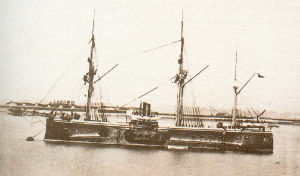 Most of the world's major navies took note of the development of this device by the late 1880s. Even the extremely reduced post-Civil War United States Navy was involved in torpedo development; and established a Naval Torpedo Station in Newport, Rhode Island in 1870.

The first vessel sunk by self-propelled torpedoes was the Turkish steamer Intibah, on 16 January 1878, during the Russo-Turkish War of 1877–78. She was hit by torpedoes launched from torpedo boats operating from the tender Velikiy Knyaz Konstantin under the command of Stepan Osipovich Makarov.

Three naval actions during the late nineteenth century changed the world navies' perception of the torpedo:

The risks of torpedoes to the ships that carried them were shown, however, at the Battle of Santiago de Cuba, in July 1898, when the Spanish cruiser Vizcaya was severely damaged by a shell hit that detonated one of her internally mounted bow torpedoes while it lay armed in its above-water tube. The USS Texas, which also fought in the battle, had its bow and stern tubes removed before the war under just such a concern. One of the major concerns of the US Navy in the Santiago campaign was Spanish torpedoes. All ships during the blockade of Santiago, despite the heat and to the great discomfiture of their crews, kept their portholes shut to delay sinking if the ships were struck by torpedoes or mines.[citation needed]

During Operation Weserübung in 1940, the German heavy cruiser Blücher, already crippled by fire from shore batteries, was hit by two Whitehead torpedoes launched from fixed, shore-mounted tubes and later sank. Whitehead's invention of the torpedo was a key development in naval history.[citation needed] 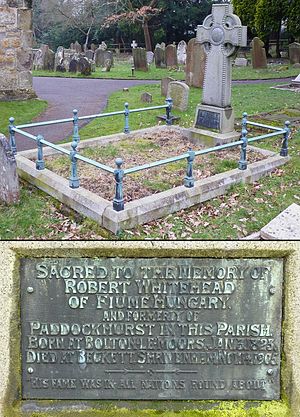 The grave of Robert Whitehead at St Nicholas' Church, Worth, West Sussex, England, pictured in 2013 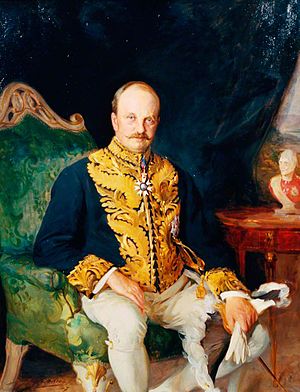 Whitehead was a devout Christian and a supporter of the temperance movement. In the early 1880s, he gave £1000 to Agnes Weston, who was attempting to buy and demolish two public houses in Devonport, expressing his hope that the gift "would knock a hole in one of them".[3] He left his fortune to his granddaughter Agathe Whitehead.

Whitehead is buried at the Parish Church of St Nicholas, Worth in Crawley, West Sussex. His epitaph reads "His fame was in all nations round about". Kozala Cemetery in Rijeka is home to the Whitehead Family Mausoleum.[citation needed]

His descendants include Countess Marguerite of Hoyos (his granddaughter), who was married to Herbert von Bismarck, and thus most of the Bismarck family of today. They include Agathe Whitehead (his granddaughter by his son, Sir James Beethom Whitehead) and her children with her husband Georg von Trapp. Captain von Trapp remarried after her death and became famous as the patriarch of the von Trapp Family Singers who were portrayed in the semi-fictional stage play and movie The Sound of Music.[citation needed]