Sir Robert de Ashton, also called "Robert Assheton" or "Robert de Assheton" (died 1385), was a civil, military, and naval officer under Edward III of England who achieved distinction alike in court and camp, by land and by sea.

Ashton was of the great northern family of Ashton or Assheton, of Ashton-under-Lyne, Lancashire. The house claims descent from Emma, the daughter of Albert de Gresley, the first baron of Manchester; she married Orm, the son of Ailward, and received from her father as a dowry a portion of the lands he had received from Roger of Poictou. From this union, probably of Norman heiress and Saxon thane, descended Sir John Ashton, who was twice married. The date of the birth of his son Robert is not known, nor are there records of his early career.

He was twice married. By his first wife, whose surname is not known,[1] he left a son, Thomas, and a daughter, Eleanor. His second wife was the widow of Lord Matthew de Gomey, and after Ashton's death married Sir John Tiptoft, knt., and died in 1417. 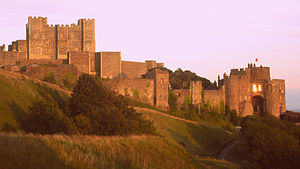 Sir Robert is first mentioned in 1324, as a member of the parliament of Westminster, and afterwards occupying positions of great importance and trust. In 1359 he was governor of 'Guynes' near Calais; in 1362 he was Lord Treasurer of England; in 1368 he had the custody of the castle of Sandgate near Calais with the lands and revenue thereto belonging; in 1369 he was admiral of the Narrow Seas; in 1372 he was Lord Chief Justice of Ireland and in 1373 again lord treasurer of England and King's Chamberlain. In 1375 he became chancellor of the exchequer, and held that office until the death of Edward III in 1377, when he was succeeded by Simon de Burley. From 1376 to 1381 he was Constable of Portchester Castle, which he reinforced by building "Ashton's tower".

The new king did not discard his father's old servant, and in 1380 Ashton was appointed constable of Dover and warden of the Cinque Ports. He died at Dover Castle 9 Jan. 1384-5, and was buried in the church there, to which he had previously presented a large bell.